A unique & culturally diverse evening awaits you at The Ford with a dance performance from Urban Bush Women and Contra-Tiempo. The cultural wonders of Little Tokyo are celebrated with the 76th Nesei Week Japanese Festival this weekend.  Looking for a relaxing late afternoon with the kids or grandkids…the Getty Center hosts garden concerts that ain’t just for kids tomatoes. If you are a western film lovin’ tomato and remember the western stars of the Golden Age of Television, then I’ve got an event that will make you want to kick up your heels cowgirls. 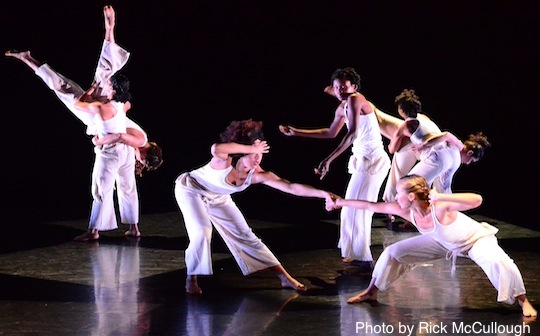 Head to the Ford Theatres for a wonderful evening of dance. The LA-based based urban Latin dance theater company Contra-Tiempo will begin the multifaceted and evocative evening with a performance from their new work “SHE WHO: Frida, Mami & Me”. This is followed by the New York-based dance company Urban Bush Women (UBW) performing the West Coast premiere of their latest work, “Walking with ‘Trane”, a story-based dance inspired by the musical life of saxophonist and jazz innovator John Coltrane. Wow! What a combination gals and it is full of women.

“SHE WHO: Frida, Mami & Me” from Contra Tiempo is a piece looking at the life Mexican visual artist Frida Kahlo and Nigerian goddess Mami Wata. Traveling the turbulent waters of protest, feminism, resilience and identity, these two stories spur a nuanced and multi-cultural dialogue. Yep there is a goddess involved tomatoes.

In “Walking with ‘Trane”, UBW explores the dynamics of Coltrane’s music through experimental movement and an original soundscape inspired by the Coltrane’s life of music and spirituality. Sounds like a wonderful and one of a kind evening ladies.  Get tickets. 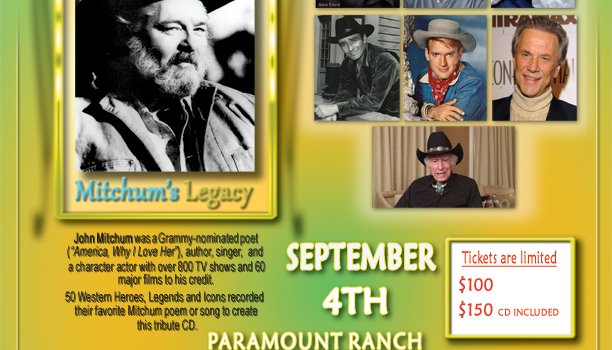 Cindy Mitchum Azbill, daughter of the multi-talented actor, singer, poet, song-writer, John Mitchum (best known as Clint Eastwood’s sidekick in “Dirty Harry” movies), is hosting a walk down memory lane and a launch party for the CD of John Mitchum’s amazing poems. Yep! And some 50 western film and TV stars, who contributed to the recording of the CD, will be gathering at the absolutely perfect and historic location of Paramount Ranch State Park.  It’s a once in a lifetime opportunity for fans to honor this renaissance man and the western stars who brought us so much joy.  Hee Yah tomatoes!

After John Mitchums death, several stars (Ernest Borgnine, Robert Duvall, Jane Russell) and many others who were fans of his poetry suggested they come together to record his poems and now the Mitchum CD is ready to be released and celebrated Sept 4th. Jonny Crawford, James Drury, Bruce Boxleitner, Alex Cord, Ann Jeffreys, LQ Jones and Barry Corbin are a few of the stars planning to attend the celebration at Paramount. Paramount Ranch was home to numerous large scale western sets and over 100 movies. The old sets are gone, but a Western Town is here for visitors to admire, complete with a Main Street lined with typical storefronts. Lots to love about this party.

Tickets are limited gals so make your reservations now by emailing www.mitchummedia@gmail.com for PayPal code or with a CC# or call 530-277-6383.  And NO tickets, and they mean it, No tickets will be sold at the door.  Get more info. 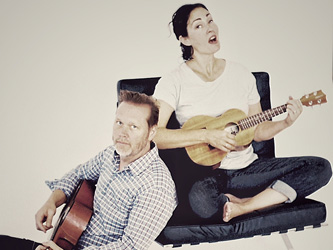 Hey you don’t have to be a youngster to enjoy the concert series for kids at the Getty Center especially when it is Renee Stahl, of Renee & Jeremy fame, performing, with special guests from her album “Simpatico”. Just bring a blankie gals to sit on. Renee’s gentle and beautiful songs were composed to appeal and resonate with both kids and adults alike.  So listen, relax and enjoy sweet music as the temps cool down under the blue sky in the gorgeous Getty central garden.

Stahl released “Simpatico” last year , a stunning collaborative record under the name Renee & Friends, where she was joined by producer Rich Jacques and a notable array of singers, writers and performers including SNL star Maya Rudolph. Garden Concerts for Kids is a free outdoor music series for kids and their families in the Getty Center’s Central Garden featuring some of the best children’s musical artists from across the nation. Blankets welcome but lawn chairs are forbidden ladies.

What’s Nisei? Or better yet…what is Nisei Week?  Well “Nisei” refers to a person born in the US whose parents were immigrants from Japan. And Nisei week is a celebration in our very own Little Tokyo in DTLA of the Japanese and Japanese American Culture and they’ve been doing it for 76 years tomatoes.  There’s just two days left to enjoy its cultural exhibitions, entertainment and activities for free tomatoes!

The exhibitions, performances and demonstrations will include a kimono dressing exhibit, flower arranging, tea ceremonies and traditional ceramics. Nisei events are located in three main areas, all within walking distance of each other.

So much to do and so much fun to be had in Little Tokyo especially this weekend gals.