Hello lovely tomatoes and Happy Halloween weekend.  There are a multitude of Halloween related events happening. I have a few Halloween highlights today, like the “At Home with Monsters” exhibit at LACMA. For all those searching tomatoes out there, Ellen Dostal shares her views on “The Search for Intelligent Signs of Life”.  The LA Department of Cultural Affairs just opened a timely exhibit “S/Election: Democracy, Citizenship, Freedom”. And Tomatoes can get a breath of fresh air, take a moderate hike and explore the Old West with “Trail Days” at Santa Susana Historic Park.  Hee Haw!

“At Home with Monsters” till November 27

LACMA’s exhibit “Guillermo Del Toro: At Home with Monsters” is every horror film lover’s dream. And there must be some horror-film lovin’ tomatoes out there.  The filmmaker’s personal possessions like a life-size statue of his infamous Pale Man from “Pan’s Labyrinth,” personal book collections, hand drawings and creepy doodles are displayed. Even if it is an a-typical outing for you, it should be fascinating and a great way to ring in the Halloween weekend tomatoes.

You can’t deny that Guillermo del Toro is one of the most imaginative filmmakers of his generation with films like “Cronos” (1993), “The Devil’s Backbone” (2001), “Hellboy” (2004), “Pan’s Labyrinth” (2006), “Pacific Rim” (2013), and “Crimson Peak” (2015), among many other film, television, and book projects. Taking inspiration from del Toro’s extraordinary inventiveness, the exhibition reveals his creative process through his collection of paintings, drawings, maquettes, artifacts, and concept film art all organized thematically. Sounds like a real trip!  Pardon my hippy jargon tomatoes.

Halloween Stuff  All Around the Town 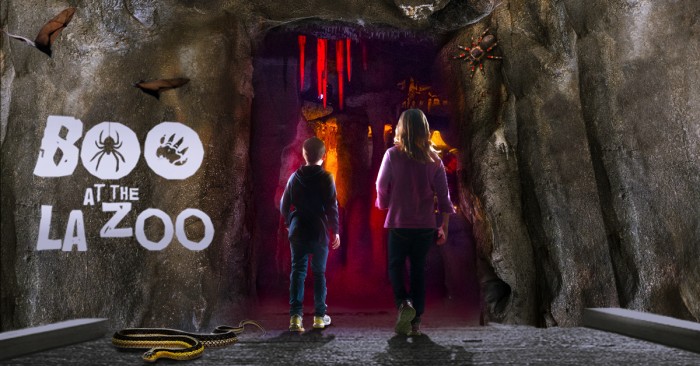 All around town there is no lack of Halloween events but for me “Boo at the Zoo” is especially kid and adult friendly with haunting good fun, the “Harvest Days and Nights” in Marina Del Rey is kid oriented by day and spooky at night with the only haunted pirate ships in LA and a “Haunted Hay Ride” in Griffith Park sounds cool if you really like hay and scary stuff . Those are just my thoughts tomatoes.

And if those don’t tickle your scary bone then maybe “Horror in the Hall” with the LA Phil at Walt Disney Concert Hall might be more to your liking on the big day (Oct 31) tomatoes.

“S/Election; Democracy, Citizenship, Freedom”, another new and poignant art exhibition, addresses issues around citizenship and democracy that, unless you’ve been in a cave without WIFI, are very prominent in this upcoming election.  Don’t worry tomatoes I’m not getting political but LAMAG’s exhibit shines a significant light on the truly significant issues of voting rights, immigration reform, education reform, identity politics, and criminal justice through…art. No matter what your views, what better way to spark civil and respectful conversations than through art ladies?

“S/Election” examines the work of some of Los Angeles most prominent contemporary artists on what it means to be an active citizen or exercise your rights, what does the status of “citizen” imply to those that are disenfranchised, displaced, immigrants, or refugees, and how does identity play into the privileges and/or duties of citizenship. Under the direction of newly-appointed LAMAG Curator, Erin Christovale, and Art Center Director, Isabelle Lutterodt, the exhibition provides an alternative platform for artists and the public to participate in civic discourse. Get details. 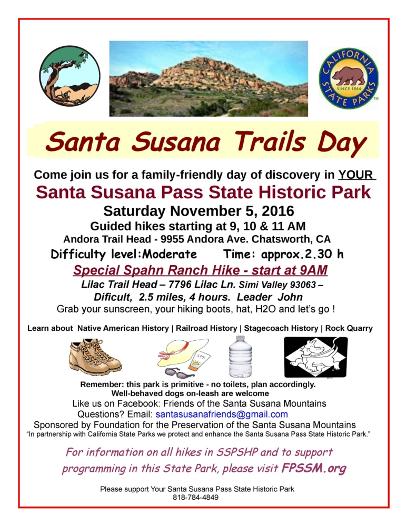 Call me partial but Chatsworth’s (my home) Santa Susana Mountains and Santa Susana State Historic Park are unique from any others in LA.  There is a real feel of the Old West here and the foundation’s “Trail Days” hikes (started in 2012) are a wonderful way to experience that history. You will never see rock formations like these and this park is also so rich in archaeological, historical and cultural significance. So time to get out those hiking boots and hats ladies because I highly recommend checking out the Santa Susana Historic Park and their guided moderate level hikes by park Interpretive hike leaders  who are chock full of the historical and environmental knowledge of this area.

Santa Susana Pass State Historic Park is a California State Park on the National Register of Historic Places consisting of historic features and sites such as Tongva, Chumash, and Tataviam Native American people’s trading routes and remains of village sites.  The land is dominated by high, narrow ridges and deep canyons covered with an abundant variety of plant life. The park offers panoramic views of the rugged natural land scape also includes portions of the Old Santa Susana Stage Road. This Stagecoach road was the main route for mail and travelers between Los Angeles and the rest of Southern California northwest to Simi Valley, Santa Barbara, and the San Francisco Bay Area from 1861 until 1876, The stage road was declared City of Los Angeles Historic-Cultural Monument #92 (designated 01/05/1972) and Ventura County Historical Landmark #104 (designated 10/21/1986).

Now thru Nov. 20. The Search for Intelligent Signs of Life

Originally Jane Wagner’s award winning play about her partner Lily Tomlin in the 80’s has been reimagined at the LA LGBT Center with Wagner’s blessing.  Ellen Dostal says this show is one that will excite tomatoes everywhere.