Time to grab those pom poms ladies or just head to The Pom Pom Warehouse Sale this weekend for fabulously priced high end home goods, furniture and accents.  The West Adams Neighborhood of South LA, which was one of the most sought after neighborhoods at the turn of the century, is lined with grand historical homes that makes for terrific 2 mile walk.  And if you really love walking, you can join the Great Los Angeles Walk tomorrow.  And another Adams in the picture this week is Ansel Adams the esteemed photographer. The powerful exhibit “Manzanar” is on view at Skirball. 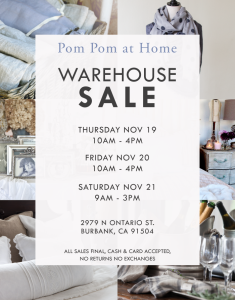 Head to the Pom Pom Warehouse this weekend, right in time for the holidays! The Pom Pom Warehouse is having their semiannual Warehouse Sale with huge discounts on luxurious linens, decor, gifts & more! You’ll save 60-89% on  linens, pillows, crib bedding, furniture, antiques, tabletop accessories, lighting, picture frames, gifts and much more.

Hundreds of Angelenos will hit the sidewalks for The Great Los Angeles Walk 2015 – the annual event that dispels the myth that “nobody walks in L.A.”  This year, for the tenth edition, the Great Los Angeles Walk is finally tackling one of the city’s iconic boulevards: Olympic! The walk will start at downtown Los Angeles’ newly renovated Clifton’s Cafeteria where Los Angeles Times architecture critic Christopher Hawthorne will discuss Olympic and the changing nature of L.A. streets. Walkers will proceed to walk approximately 16 miles (at a casual, all-day pace) to the ocean.

Olympic was chosen for a variety reasons: Not only is it one of the few major Los Angeles streets that the Great Los Angeles Walk hasn’t yet hiked, but for their 10th anniversary, it makes sense to celebrate on the boulevard once known as 10th Street. Olympic Boulevard was renamed in honor of the 1932 Olympics – and now, as Los Angeles harbors dreams to once again host the Games in 2024, the Walk will also recognize that bid. Participants will meet at downtown Los Angeles’ newly renovated Clifton’s Cafeteria at 9 a.m. on Saturday, Nov. 21. There is no charge.  Get more details.

If you love old homes, here’s a fun thing to do on a Sunday afternoon.  Head to West Adams, one of the oldest neighborhoods in Los Angeles and walk through the neighborhood. Though much of its history is forgotten, it was once an area of grand homes and bustling development. The great land boom that turned Los Angeles from a Pueblo to a metropolis came during the period of 1887 through 1915. West Adams neighborhoods play host to unique homes featuring years of history, charming character, and beautiful architectural details. 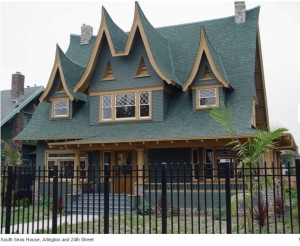 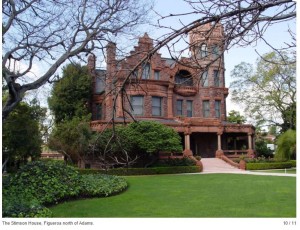 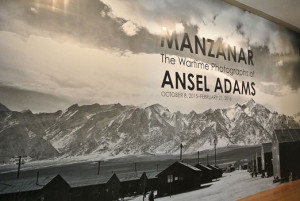 Now thru Feb. 21. ANSEL ADAMS at the Skirball
Head to the Skirball for a powerful new exhibition of “Manzanar: The Wartime Photographs of Ansel Adams,” which features 50 little-known works depicting incarcerated Japanese-Americans during WWII.  Yes, this happned right here in California at a Japanese American incarceration camp in Manzanar. These photographs were the subject of Adams’s controversial book Born Free and Equal, published in 1944 while war was still being waged. The book protested the treatment of these American citizens and what Adams called their “enforced exodus.”

The exhibit offers insight into a decisive and disquieting period in American history. Powerful forms of civic and artistic expression, the images speak to the Skirball’s mission of confronting injustice, embracing diversity, and preserving community.  Don’t miss it.

Tags: LA Lifethe three tomatoesthings to do around LA