Latin History for Morons Written and Performed by John Leguizamo

John Leguizamo is one talented performer. He can easily fill a stage all by himself, which he has done on or Off- Broadway six times now. His sixth solo production, currently on Broadway at Studio 54, is humorously titled Latin History for Morons. That title alone drew me in.

In his classroom, we have a lot of work to do, he says at the top of the show.

And he is not incorrect.

In a school room setting, Leguizamo embarks on a comprehensive journey going way back to the Mayans and Aztecs, and continues to trace the stories of Latin patriots who have participated in the Revolutionary War, the Civil War, in fact every war the U.S. has engaged in. 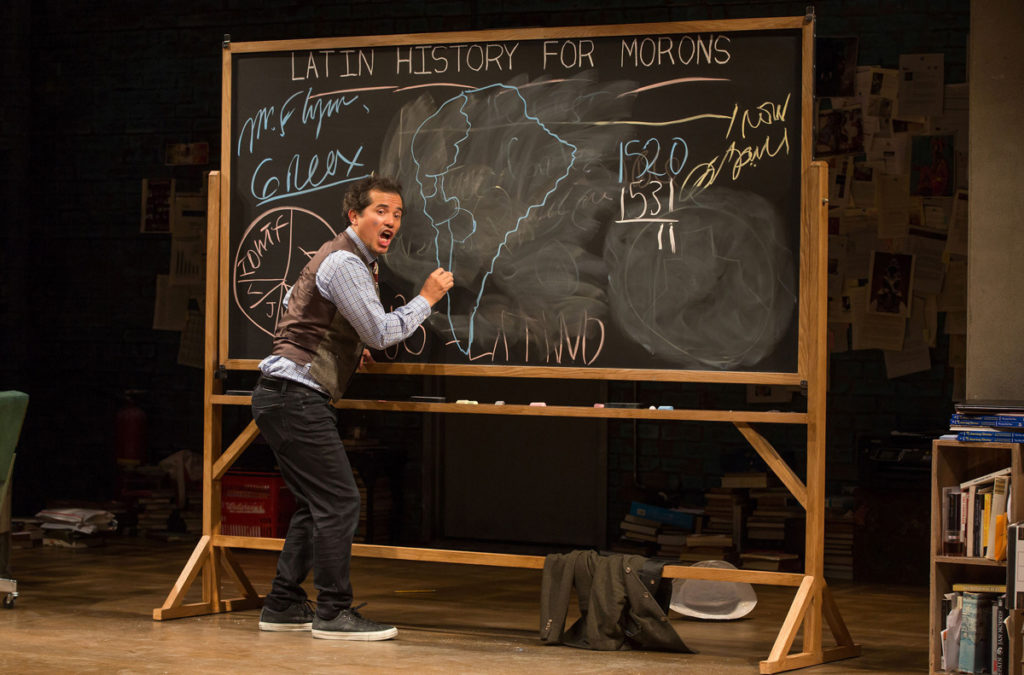 Interwoven into the long lesson is his own story. When his son is bullied and called a name for being Mexican (his son’s Latino heritage is actually Colombian and Puerto Rican), Leguizamo is determined to teach his son about his background so that he may experience Latin pride. At the same time, he attempts to help him identify a personal hero for his middle school project. There is no question that Leguizamo did a great deal of research into the historical background of his ancestors. He uses a blackboard and chalk to create visual aids; calculations and pie charts are scribbled all over the board, which is quite an amusing convention.

There are Spanish phrases he uses that will go over the heads of anyone who is not Spanish speaking, but they are not prevalent.

As a performer, Leguizamo is particularly adept at impressions and characters. Improvisation is sprinkled into the scripted piece, as he adds news of current events into the show and interacts with the audience deftly.

However, this piece lasts a little bit too long. It runs closer to an hour and 45 minutes and he could have easily lost 15 minutes of text, as the play meanders in places. Nevertheless, Latin History for Morons is entertaining and John Leguizamo is super fun to watch.