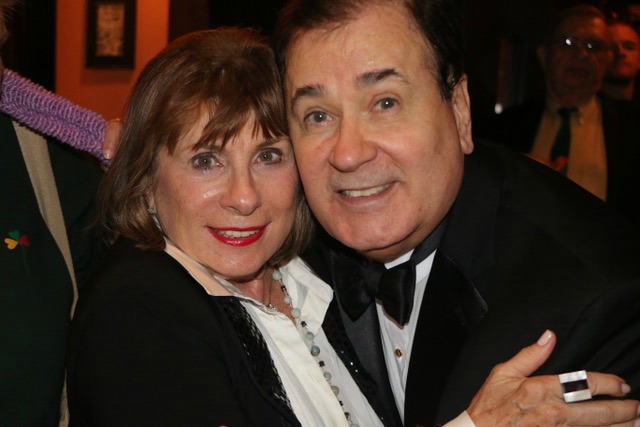 Song and dance man, Lee Roy Reams brought the house down at 54 Below Celebrating 42nd Street. Originating the role of Billy Lawlor in the Tony Award winning musical (1981), the man referred to as Broadway royalty showed us how it’s done.

With backstage stories gone wild about cast members and the much talked about producer David Merrick, every eye and ear was riveted to the stage as Reams took on the form of the energizer bunny, with James Followell at the piano, sounding like an orchestra. And, make no mistake, when Reams performs those eyes included Michael Feinstein, Marilyn Maye, Anita Gillette, Penny Fuller, Martin Charnin, Shelly Burch and several original cast members.

Reams is a wealth of backstage information that tantalizes and titillates when it comes to gossip about 42nd Street’s David Merrick – the abominable showman! Merrick had only one investor in the show whom he bought out and, at the time, had three companies, making an unheard of $1Mil a week! Not bad for a kid from Missouri who became known for his publicity stunts that served him very well through the years until he died at age 88 in 2000.

And so, Lee Roy Reams – a master storyteller – proceeded to sing 12 songs; 11 from 42nd Street and one his audition song “I Only Have Eyes For You.” Reams joyfully sang (and danced) songs written by Harry Warren, Al Dubin and Johnny Mercer, including “Young & Healthy – the first song Lee Roy sings in the production; an exquisitely funny interpretation of Tammy Grimes singing “Shadow Waltz” and “About a Quarter to Nine;” he adorably “Shuffle(d) Off to Buffalo,” poignantly delivered “I Know Now” – a beautiful ballad featuring simulated garlands (you had to be there) and his solo song “We’re in the Money.” Lest I forget, each song begot another wonderful photo (set up on screens flanking both sides of the stage) of Lee Roy singing and literally flying across the stage in the fabulous production numbers with original cast members. Royalty who attended opening night at the Winter Garden included Cary Grant. This one-of-a kind photo montage was transporting to say the least!

Stories about Tammy Grimes produced a lot of audience laughter – Lee Roy describing her as “fascinating,” along with wonderful tidbits about the brilliant Gower Champion who ‘made the sets dance.’ When the show closed in New York, he and Tammy went out on tour with 42nd Street allowing for more priceless Tammy interpretations.

Merrick, a task master, insisted upon numerous rehearsals and full dress performances with no audiences, or a few invited guests, including a rehearsal day of the opening on August 25th, that was mixed with joy and sadness on the opening as Merrick , at the curtain call, announced Gower Champion’s death that very afternoon.

Lee Roy mentioned his very unique pair of tap shoes – one signed by Ruby Keeler (his dear friend), the other by James Cagney. Can you beat that?

No doubt, Reams is an endearing and charming performer with enough pizzazz to win over an audience instantly. His performance ended all too soon as the time flew by. Here’s hoping there will be a repeat very soon as there were only two performances – October 6 and 7 . . . surely not enough.