L’Heure du Thé at The Baccarat

Romantic nights. A lyrical elixir. The unspeakable bliss found only in dreams. No, I’m not waxing operatically over memories of young love. Nor am I in a preamble to confide some unexpected senior moment with Cupid’s arrow. 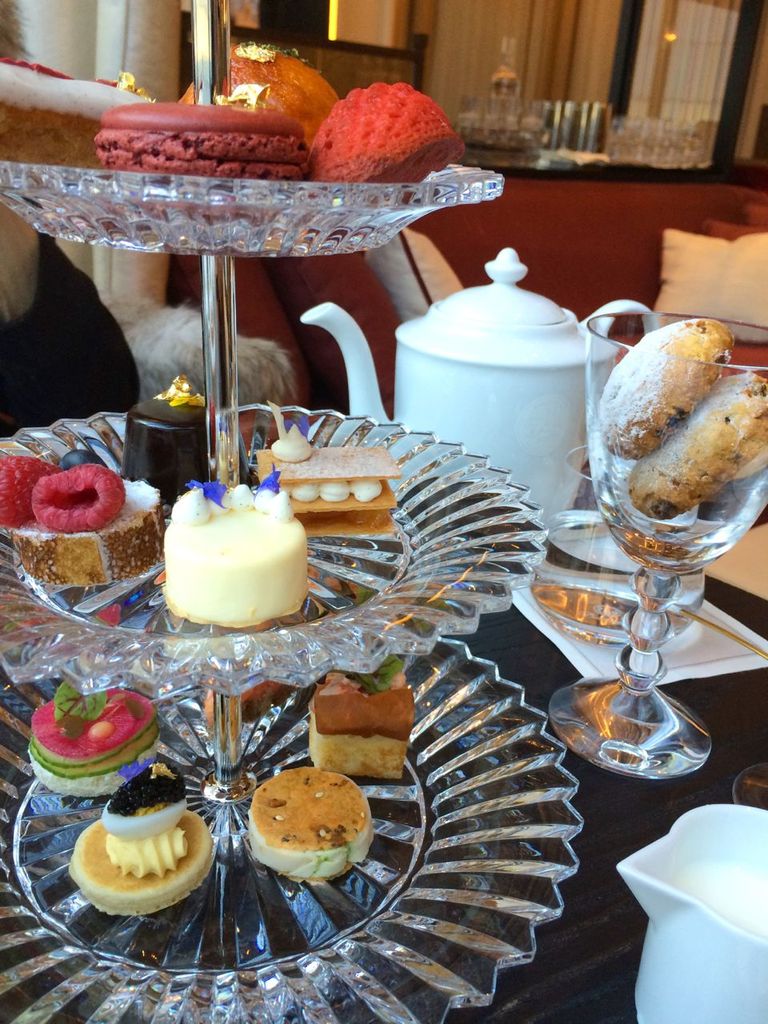 Tasting two tea menus in the Grand Salon at The Baccarat Hotel.  It’s work, you know.

I’m just having tea. I’m not a tea drinker. I don’t like tea at all. But I couldn’t resist the invitation for a preview of the fancy new tea service upstairs in the Grand Salon at The Baccarat Hotel. Maybe you take a break for tea every afternoon at about four. Maybe you meet friends for a fussy tea every year on your birthday. Not me.

For me, the rituals and posh of tea in a fancy hotel are a distant dream. Tea is wrapped up in the memory of a week in London in 1993 at the Lanesborough. (Click here to read True Brit.) Or more recently, tea in a detour to the Inn at Little Washington. I rarely even do lunch. Usually, I sit seven days a week, bound to my computer and the phone in my workout déshabillé, belatedly staggering to the kitchen to make my puritanical salad at 2 p.m. (Or occasionally grabbing a sandwich from Tasty Caféand sneaking off to a movie). 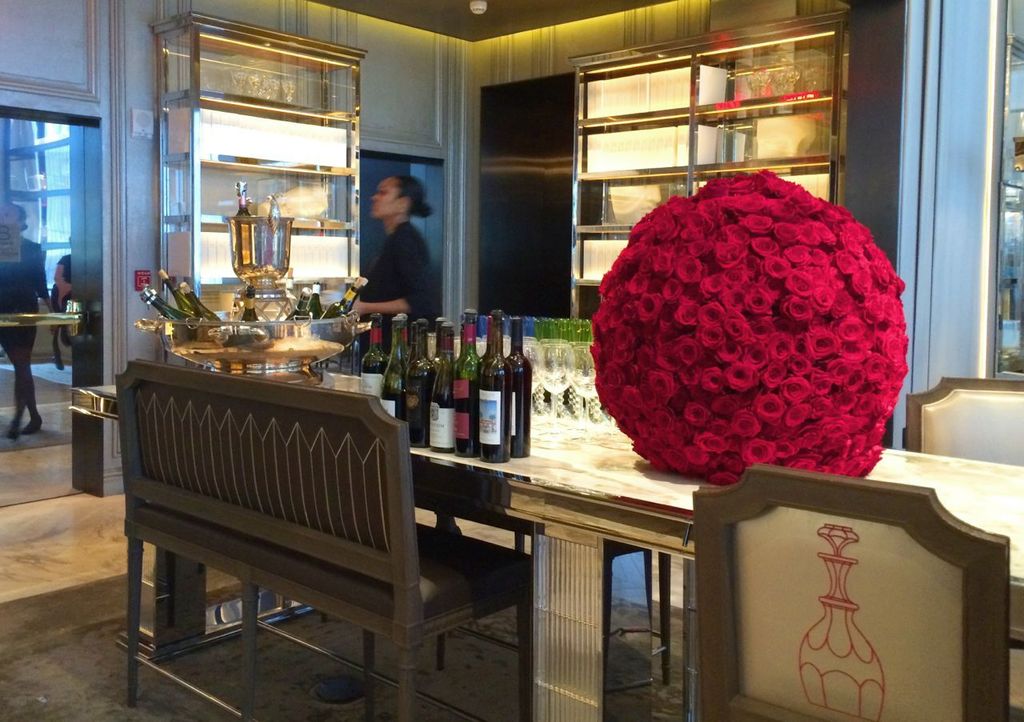 The Baccarat Hotel spares no expense to keep that round of red roses full and perfect.

Normally, my friend the graphic designer/brand consultant Diane Velletri works so intensely she doesn’t answer her phone messages until 6 p.m. But today, she’s decked out in designer duds and curled her auburn bangs to meet me in midtown.

I’ve combed my hair and attached a Josef of Hollywood brooch to a black velour bodice (if we’re going to get into the mood of Louis XV). That’s whom the hotel honors at “L’Heure du Thé” with its “Mélange Rouge” sweets and a savory. It will cost $65 with the appropriate tea from Mariage Fréres, $75 with their rose petal brew, and $95 paired with Ruinart Champagne Brut Rosé NV. And why not? Before “Louis the Beloved” died of smallpox at Versailles, it was he who issued a royal decree to establish a glassworks factory in Baccarat and hosted revelries featuring its most amitious crystal creations.

By Valentine’s Day, presumably every perch in this grand, high-ceilinged room, looking out through glass panels at the MoMA across the street, will be reserved by romantics, affluent dowagers pretending not to mind the neglect of jaded mates, and illicit lovers with plans for old-fashioned monkey business after tea. (At least, one would hope. If it were me, I would have reserved a suite upstairs in advance, especially if it could go on someone’s expense account.) 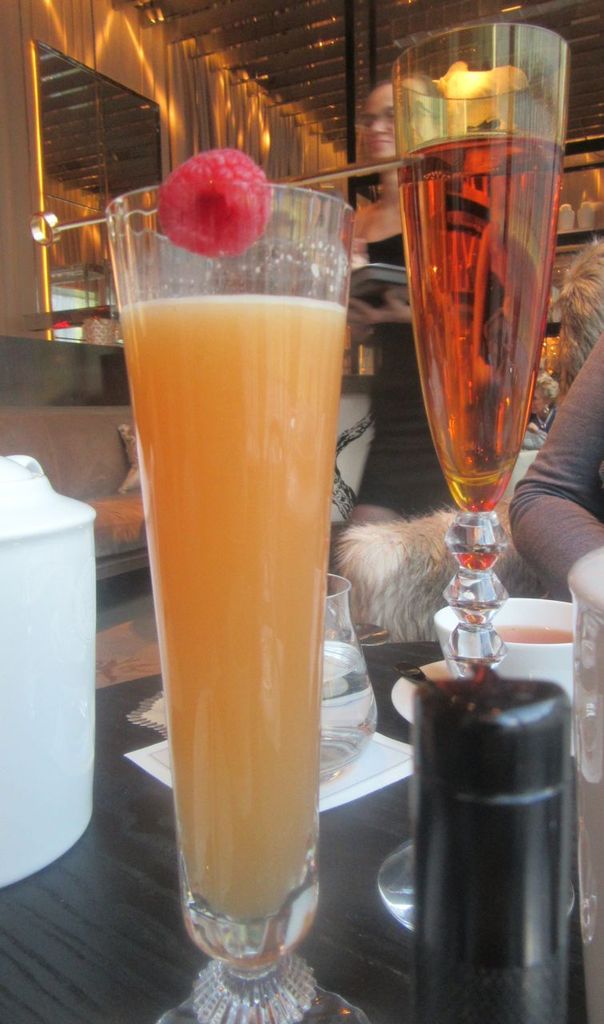 I’m not fond of champagne (except in the bathtub or on a picnic). I’ll have a mocktail instead.

The two of us, Diane and I, actually collide at the entrance and take the elevator to grandeur together. I’ve booked at 1:30 to make this tea serve as our lunch. There are two men tippling at the table where a florist refreshes a giant roulade of red roses every morning under a dazzling Baccarat chandelier. And one young dude works at his computer in the corner.

So I’m quite astonished to see my friend Marjorie on the sofa sipping with a friend. “It’s so great to come here for tea,” she says, coming over to where Diane and I have settled on fake-fur upholstered armchairs at a tiny round table.

The tea sommelier arrives at our table. She seems very young, with her dark hair pulled back, and very soignée in a sophisticated black dress (her uniform) with a small teapot brooch on one shoulder. The pin was a gift from a tea saleswoman after she received her certification as a tea sommelier, she confides. It’s an eight-week course given around the world by the International Tea Master Association. “There were six in my class.”

Diane is easy. Champagne? Yes, of course. Who knew champagne was part of the deal? “Rosé brut” to go with the red snacks. She’ll have the “Mélange Rouge” tea that comes with the Louis XV experience. “With milk, please.”

“What qualities do you think you would like in a tea if you liked tea?” the sommelier asks. It’s not easy to throw Gabrielle Jammal off her mission. Her grandmother was English. Her father is Middle Eastern. “We had tea every day with lunch.  It was just part of my life.” She worked at Teavana Tea stores before earning her credentials and coming to Baccarat. She did lots of research.

“Something fruity,” I say. “Do you have peach tea?” I had peach tea once at Takashimayaon Fifth Avenue with Joel Grey and really loved it. (But that might have been a reflection of the pleasure of being with Joel.) “Or maybe something citrus. Do you have bergamot?  Or even better, orange?”

And I’m not in the mood for champagne. I’ve avoided most bubblies since the week I had champagne seven or eight times a day on an amazing boondoggle organized by the publicist diva Yanou Collart for Moet & Chandon a few decades ago. (Click here to read “Nobody Knows the Truffles I’ve Seen.”)

Maybe I’d like the mocktail, Gabrielle suggests.  It doesn’t sound like me, but maybe I would. A server in a slinkily bare cocktail dress pours Diane’s champagne. Given my initial sullen negativity, I’m pleased to report that I’m wild about my mocktail: a blend of strawberry, rosewater, pineapple, fresh ginger, lemon and a dash of club soda.  What’s not to like? I could easily have skipped my tea. The sommelier had chosen The Ruschka for me, “a searative (sic) black tea scented with essence of citrus and other fruits, dotted with silver needles.”

About then, I begin to think maybe we are not there just as a journalistic exercise, but also to train the staff. Our tall white pots of tea arrive long before the savories and sweets. We send the server back to get a strainer for Diane’s tea, then realize he’s forgotten the milk. “Two per cent or regular?” he asks, going back yet again. The tea is cooling and the compulsory frippery is still nowhere in sight.

At last, the goodies for both the King Louis XV and The Prince of Wales indulgence arrive on one tiered crystal server. (There’s a $25 share fee, I see, but probably not if you’re sharing two teas.) It’s easy enough to see which goes with what. The King’s menu comes with a “Melange Rouge” of goodies – a tangy tomato white cheddar brioche, a raspberry éclair, a raspberry mousse tartelette, a red velvet macaroon (spelled the American way), and a rose-scented madeleine, all crowded onto the top tier.

But the two of us start with the wonderfully decked out and delicious savories of the Prince’s menu, my guest Diane cutting each of them precisely in half. Roasted chicken roulade with smoked ricotta and pesto on everything crisp. Lobster salad with truffles on buttered Parker House roll. Deviled quail egg with sturgeon caviar, and pickled onion on brioche. Cucumber with watermelon radish and goat cheese on white bread. Smoked salmon with dill and Robiolina cheese on marble rye.

Then we work our way up, splitting the little pineapple coconut Napoleon, the lemon ricotta cheesecake, a gooey chocolate Sachertorte and the raspberry roulade. There is a pair of lush warm scones in a goblet too, to slather with Devonshire clotted cream and dapple with crab apple gelée. By the time we’ve shared the red offerings as well, it’s no longer a fantasy. It’s an excess. I’ve decided to cancel dinner.