Makeover Video: Ready for Something Fun and Different 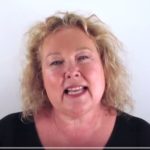 Tambrance (pictured here in her before) walked into Christopher Hopkins salon for a makeover, ready to do something fun and different with her hair. She spent many years performing on stage and camera and decided it was time to update to a new chapter. Wait til you see what Christopher and the crew did with her naturally curly hair. Her naturally curly hair was enhanced with a hand painted highlighting by Joelle Hicks, Kami Kleven gave more contrast to her eyes and I brought up the cut to increase volume and fullness.  Watch the video transformation.