I seem to be very attracted to stories about outsiders. When I was in my early 20’s, I wrote a children’s story about that very theme.  A young girl who loves bees, must leave the country to live in the city where the kids are more “sophisticated” then she is, and laugh at her home-made clothes. My little story progresses from there, with a happy ending, but nonetheless, the country girl was surely deemed the outsider at first.

And that is how Mean Girls begins. After the opening number, “A Cautionary Tale”, where the two high school outsider sets the tone, we are transported to Africa, where we meet Cady Heron (the delightful Erika Henningsen), who lives there with her crunchy granola parents. Cady is worldly for sure, but when she and her parents leave their animal haven in Kenya for the wilds of Illinois, the other kids in her high school just look upon her as weird.

Cady is befriended by the two we met at the top of the show, the other odd people at the school- the hilarious Damian (Grey Henson) and Janis (Barret Wilbert Weed)  the indie spirit girl, who take Cady under their wings.  A happy trio they are, until the most popular and feared girl at school allows herself to befriend Cady and have her join her very selective clique.

And what a clique it is, led by perpetual homecoming mean queen Regina (Taylor Louderman), who is  dutifully followed by the insecure and selfie obsessed Gretchen (Ashley Park) and the pretty but dumb as a door nail Karen (Kate Rockwell). 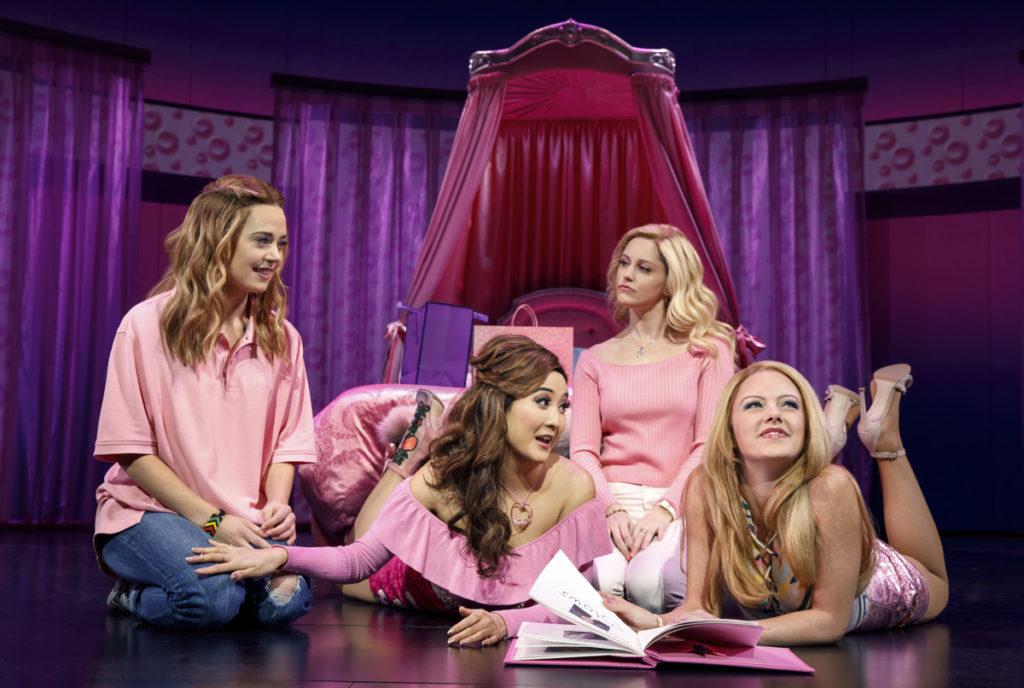 Things change when you are accepted, don’t they?

Mean Girls, written by Tina Fey, is very funny for sure, but we can absolutely go deeper with this show. This musical reminds me a little bit of a mash up of themes from Wicked and Dear Evan Hansen, because it appeals to all our deep inner desires to be loved and accepted for who we are, no matter the cost.

All of the principal actors are just perfect, with a mention about Kerry Butler, who plays three different roles so well. If it were just a few years ago, Kerry could have easily been cast as Regina, but as time marches on, one of the three characters she plays is that of Regina’s mother (and it is easy to see that the apple does not fall far from the tree.)

The characters created (based on the movie) are clearly defined and quite wonderful. The voices of each and every person in the cast top notch, and the acting is great.

With fabulous choreography and direction by Casey Nicholaw, the funny and irreverent, Mean Girls holds up a mirror to our world.

With terrific music by Ms. Fey’s husband, Jeff Richmond, and lyrics by Nell Benjamin, this is a show for everyone. Clever, witty, and even poignant, I loved Mean Girls.