Mending Hearts and Making Music at the HONKY TONK LAUNDRY 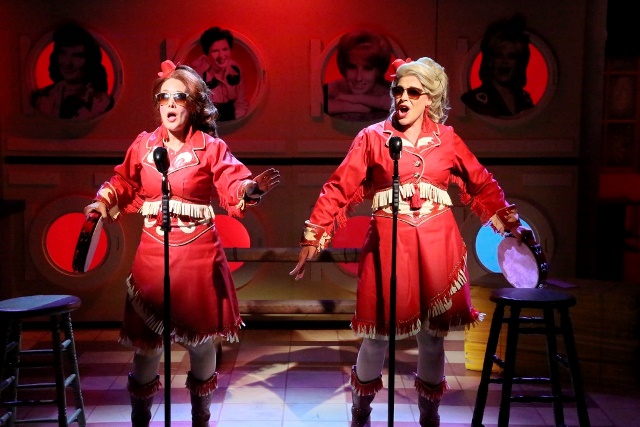 Bets Malone and Misty Cotton belt their way through this lightweight country and western musical two-hander by Roger Bean – creator of the popular Marvelous Wonderettes musicals and Life Could Be a Dream – and prove that female friendship wins over bad lovers any day of the week. The G-rated jaunt visits typical country storytelling territory where men are cheats and women help each other pick up the pieces, with plenty of singing and countrified self-help catchphrases to put it all into comic perspective.

The score is a mash-up of songs from many decades of the country catalog (plus one original song by Bean and Adam McPherson, “I Wish That I Could Yodel”). Some are classic hits like D-I-V-O-R-C-E, originally sung by Tammy Wynette, Patsy Cline’s “I Fall to Pieces,” and Nancy Sinatra’s “These Boots Are Made for Walkin.’ Most of the rest fit into a genre of girl power country songs that came out of the late ‘80s,’90s and beyond from artists like Martina McBride (“Independence Day”), Reba McEntire (“Take It Back”), Sara Evans (“Born to Fly”), and the Dixie Chicks (“Long Time Gone,” and “Wide Open Spaces”). Cotton and Malone funnel their characters’ emotions through the vocal wringer on all of them, often with hilarious results. Cotton’s intensity — she’s would tighter than a drum for most of the show — has the audience repeatedly in stitches while Malone’s blunt, unpretentious sincerity is a whole other kind of funny.

Laid back laundromat owner Lana Mae (Malone) meets uptight Katie Lane (Cotton) when she puts up a Help Wanted sign and Katie ducks in to her establishment after a run-in with her cheating ex. Act One reveals how the two bond over love gone wrong while sharing intimate details of their lives. In Act Two, they reclaim control of their destinies, and Lana Mae’s dream of becoming a country music singer, by turning her Wishy Washy Washateria into the hottest Honky Tonk stage in town.

Bean’s book is appropriately hokey, with predictable outcomes that leave the audience on a rousing high but there are times the show needs to shake its cliché-ridden writing or risk feeling dated. Billed as a new musical, it was originally written about a dozen years ago and was first produced at Milwaukee Repertory in 2005. A more recent update of the show played Vista’s Broadway Theatre earlier this year.

Both the full-blown stage show in the second act and its earlier first act set-up share a likable goofiness and folksy charm. Comic bits with audience participation work well in the Hudson’s intimate theater configuration as does James Vásquez’s classic country and western choreography. Bean’s staging is active and well-calibrated for both the space and the needs of the characters. 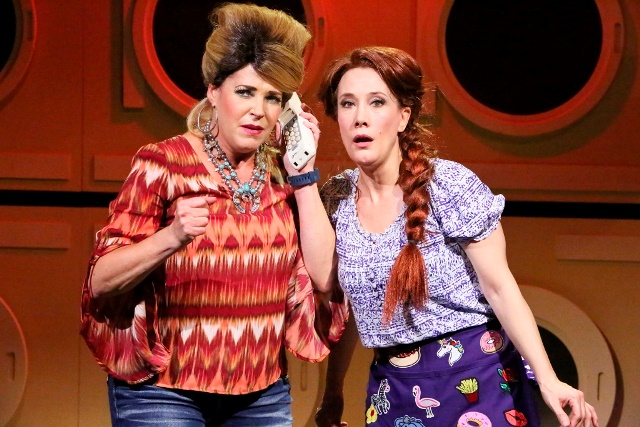 The Washateria is a retro-inspired dream of a set by Tom Buderwitz, who transforms the functional space into a performance venue with numerous quirky touches. Renetta Lloyd’s costumes and Byron Batista’s hair and makeup reflect each woman’s unique personality; Lana Mae’s tending toward a tastefully tacky blend of big jewelry, big hair, and big prints, and Katie’s expressed in simpler styles with more juvenile prints and less makeup. Their glammed up red leather show costumes are right on the money for the big finish.

Lighting designer Steven Young pulls out some surprising creative effects, including a full night sky of fireflies and stage lighting that emanates from within the washers, dryers and shelves.

Cricket Myers’ sound design is bright and balanced but the sound engineer could bring the volume down a click or two. So much nasal belting can be overwhelming in the course of two hours, especially when the actors need to hit the belt just right on the attack or risk going flat. The musical ends rather abruptly at the completion of the floor show and although it is a natural place for the audience to break into applause, I would have liked to see one final scene after their big night that wraps the whole production together.

In any case, Honky Tonk Laundry is an appealing production featuring two stars of the Southern California musical theatre scene at their best. So grab your boots and head on down to Hollywood for an empowering girls’ night out at the theatre, country style. Hubs can get his own beer ‘cause you’re done doin’ laundry tonight!

Friday and Saturday at 8pm, Sundays at 3pm & 7pm