Meow! Cats is Back on Broadway.

I took a friend to see the revival of Cats on Broadway. She somehow missed its first run, and never really knew what Cats was about.

After intermission she said, “I didn’t realize it truly is all about characters playing cats. I thought there would be people characters somewhere in the show.”

I thought that was such a cute remark that I had to mention it in this article. So, if you, like my friend, did not realize

Cats really and truly is all about felines, this is a reminder,

Cats is all cats, all the time. 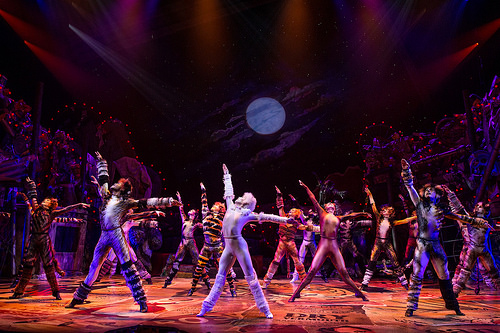 The story, if you can call it that, is based on T.S. Eliot’s “Old Possum’s Book of Practical Cats.”  We meet some pretty outstanding cats on this one night, in the alley where they hang out.

In a series of vignettes, we learn that the capo di tutti capi in the kitty-cat world is going to choose one cat who will live forever. Who will it be?

The rock star cat, the magical cat, the old actor cat, the mystery cat? Or will it be the cat whose coat is ratty and frayed, the one who is shunned by the group, and the one who sings Memory several times
during the show. That kitty, Grizabella, is the one everyone in the audience is rooting for. After all, there is nothing better than having an outcast character in a Broadway show. You just can’t beat that convention for making an audience connection.

This Grizabella sort of lurks around the stage, awkward and plodding, while the rest of the clowder of kitties jump and arch and slink about.

They just don’t like that Grizabella. But the audience does, as British recording artist Leona Lewis, who has sold more than 20 million records worldwide, takes on this role, singing the iconic song. 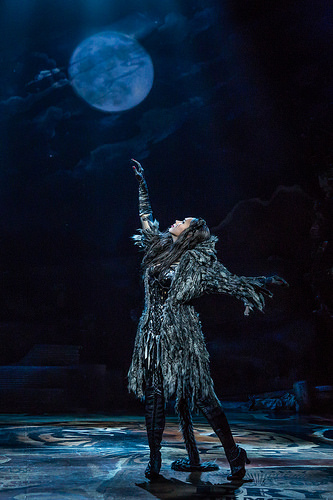 This production uses some spiffy technology in the staging and lighting, which freshens up the look and feel of the show. Although Hamilton Tony award winner  Andy Blankenbuehler is the choreographer, the dancing is based on the original choreography by Gillian Lynne. Trevor Nunn directs, and of course, Sir Andrew Lloyd Weber wrote the music. He is currently represented on Broadway with three shows. His School of Rock plays across the street from Cats.

Seeing Cats is nice. It’s familiar, but it can get tedious, especially during the Jellicle numbers, of which there are several. I wanted to scream, “please stop with the Jellicle cats!”  but that impulse passed.
It’s just that the passel of kitties that play and tumble sing about Jellicle cats far, far too much.

The second act is much better than the first, as it is more energetic and entertaining. And at the conclusion of the show, Cats does seem to be a big audience pleaser.
As my friend said after the standing ovations ended,”who would have thought that a show all about cats would last so long and come back again?”