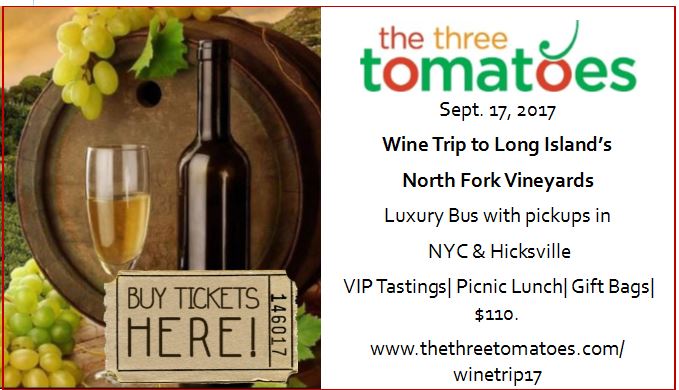 The good news about going to see Michael Moore’s The Terms of My Surrender is that you pretty much know what you are going to get philosophy-wise from the activist film maker. The bad news is  that if you think this no-intermission show will adhere to the published (and already too long) run time of 1 hour and 50 minutes, forget about it.

Michael Moore can go for as long as 2 1/2 hours on stage, drinking numerous bottles of water for sustenance, on any given performance of his show currently running on Broadway.

There is no question that he is preaching to the choir in the house. The people who have come to see him are devotees. 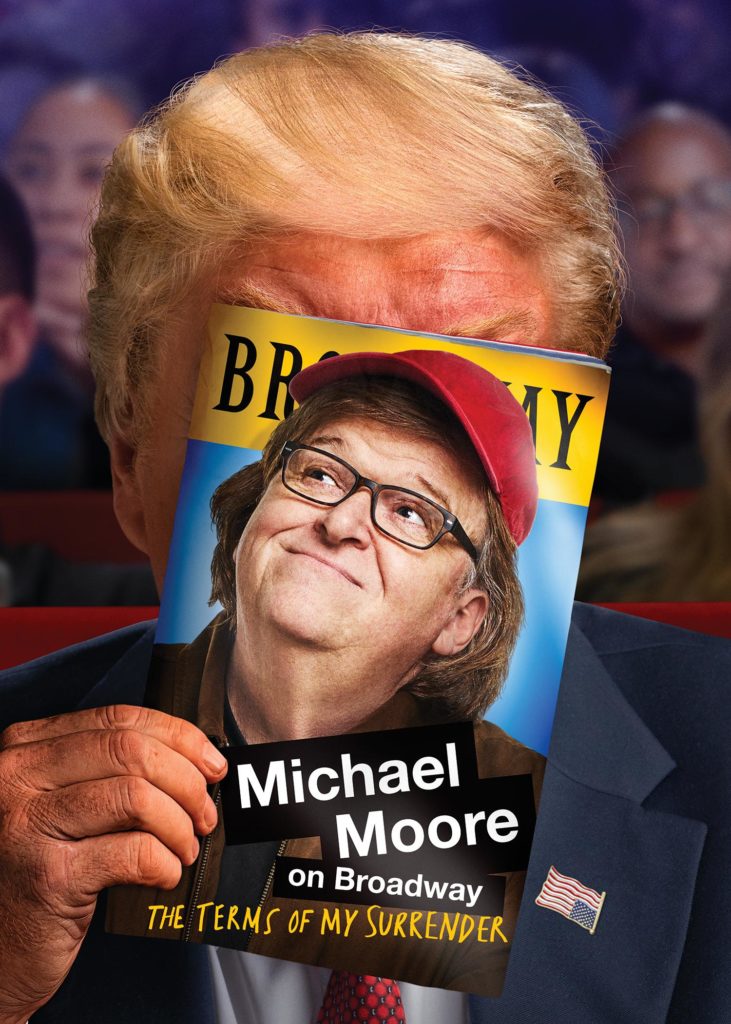 The first 20 minutes or so, Moore is purely venting about how Donald Trump actually got into the White House, despite the popular vote. He deftly provides information and statistics backing up the election win.  Moore addresses the audience as “we”, creating the “us” versus “them” rhetoric that both sides of the aisle insist on using. He is cheered on by an adoring crowd, with shout- outs from the audience, making it feel more like  a town hall meeting than a Broadway show.

Is the information he is sharing and his outrage important? Absolutely. Is it executed in a way that makes sense in a Broadway theatre? Well, not really. Think about the ticket price one must pay to see the show, the creative team that is necessary to produce this piece, the stage manager who must have a headache every night, trying to follow a loose script.

Improv is great, but only with an accomplished improvisational artist.

Having pointed out the negatives, now I must say that Michael Moore is smart, passionate, and actually showed a lot of down home sweetness during the show.
The best part of this piece is his story-telling. The show took a different turn when he sat at his desk, or easy chair, relating the routes of his activism. His early beginning, we learned, was pretty much by chance. Astonishing stories for sure. They were interesting and he was inspiring. Not preachy or judgmental. He was just telling his story. 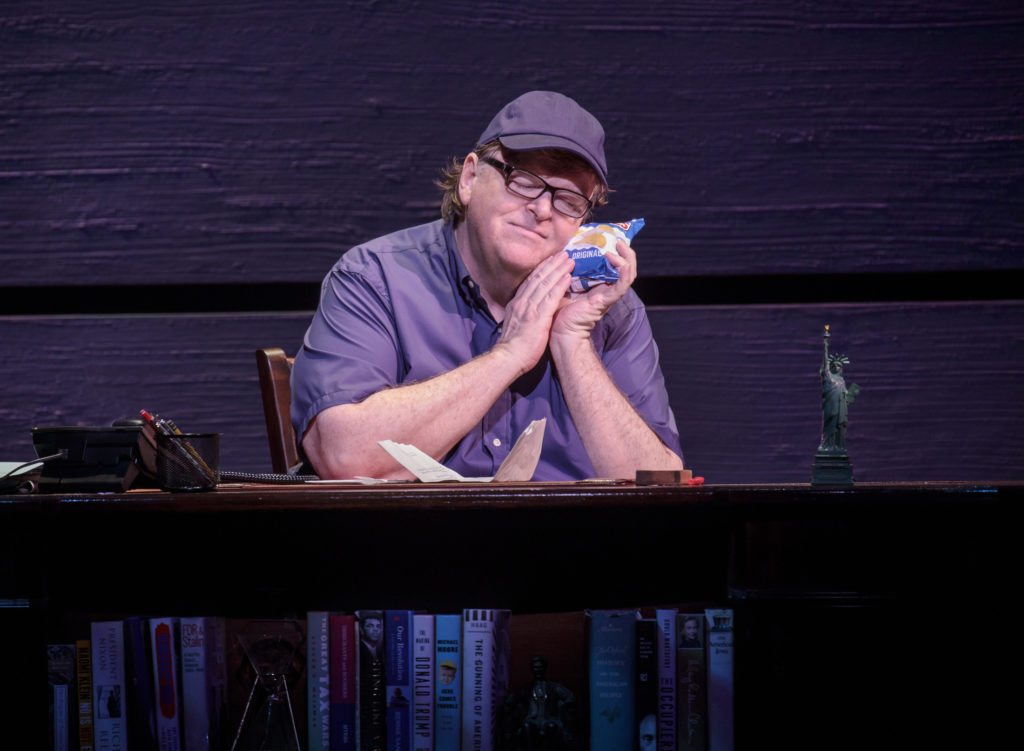 Moore invites audience participation, identifying an American and a Canadian in the house, bringing them up on stage, pitting them against each other in a mock quiz game show. His theory is that the dumbest Canadian is still going to beat the smartest American. He is generally right.

Moore has created space for an interview segment featured toward the end of the piece. The night I saw it, he brought out a librarian. Moore explained that in 2001, at a speaking engagement at Rutgers, he told the crowd that his publisher had just pulled his book because the company felt it was inflammatory, as it was slated to be released right after 9/11.

A woman who was in the crowd that night, (the librarian), went home and sent one email to her “list-serve”  of librarians. Apparently that email was shared, went viral and created a movement. A demonstration of librarians protesting the removal of Moore’s book from stores took place outside the publisher’s office in Manhattan.

This lovely librarian, who Moore brought out for the interview, was the one who sent the email.  Surely an interesting story, and one that illustrates how one person can make a huge difference. (P.S., the book was released and went on to enjoy huge success). But the interview segment was an energy deflator. The interview went on and on and on, with the librarian talking too long and too much, and Moore having no idea how to contain it, or perhaps did not want to.  I was imagining the stage manager sweating, as the segment was interminable.

This piece could have worked so much better if Moore and Mayer crafted the script in a more concise manner, with his outrage, and his storytelling integrated organically. It felt too segmented and not holistic.

Timing, content and performance can all be fixed.  Then, The Terms of My Surrender would be a really cohesive piece, with a definite point of view.

The show plays until October 22.  http://www.michaelmooreonbroadway.com/