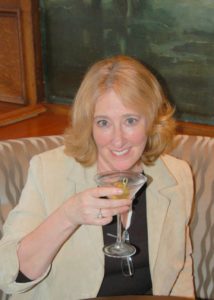 So what’s the answer to the burning question “Why are mothers and martinis alike”?   Well, it takes a while to make the perfect one; and the older you get the more you appreciate them.  The Three Tomatoes came to motherhood relatively young, and to martinis relatively late in life, which all in all worked out rather well we think.  So what better way to celebrate Mother’s Day than by saluting “perfect” moms and “perfect” martinis, although we’d all most likely agree the latter is a much simpler task.

When The Three Tomatoes were growing up, the “perfect” Moms were on TV in the form of June Cleaver and Donna Reed. These women were always dressed in their little pumps, with their little pearls, and perfect little aprons, from morning to night and lived their lives according  to The Good Wives Guide.  The next generation of course had The Brady Bunch and Partridge Family “perfect moms.” And today’s generation has “reality” TV Mom’s like Sharon Osbourne, the matriarch of the Ozzy Osbourne clan.  And let’s not forget Carmella, mafia mom to the Soprano’s offspring who, when all is said and done, may actually be the best mom of them all.  She’s fiercely protective, always supportive, tough on them when called for, and most importantly knows that when all else fails, a good plate of pasta cures all.

Now we know when your Mom passes away, there is a tendency to elevate her to sainthood.  But the truth is, our Moms weren’t perfect — thank goodness!  And it’s really the “imperfect” things that we most cherish now.  Especially after we became Moms and realized how tough this job called Mom really is.  So to some of you younger Moms out there, who are living that “imperfect” guilt thing, here’s a little Mother’s Day advice from The Three Tomatoes:

There is just something so perfect and elegant about a martini that just sipping one makes us feel like a flawed heroine out of a Fitzgerald or Hemmingway novel, or preferably a James Bond girl.   It’s really  less about the actual drink than the seductiveness of the ritual —  the beautiful glass, the crisp look of the liquid, the gentle clink of the glasses, and the delicate first sip — that make the martini a wonderful little indulgent luxury.  Much has been written about the martini over the years, but two recent articles, one in the New York Times and one in the Wall St. Journal got our attention.

Eric Felten did a wonderful piece in the WSJ on “real martinis” versus just about any cocktail poured into a martini glass and called a martini (like apple-tinis, cosmos, etc.).   A real martini, according to a 1948 book he uncovered called “The Fine Art of Mixing Drinks,” by David Embury,  is gin and vermouth, stirred, despite James Bond’s preference for shaken.  Used copies of this classic book by the way, start at $175  at Amazon if you’re looking for an unusual Mother’s Day gift.   Although Felten points out that it was common well into the 1930’s to “douse one’s “dry” with a dash or two or orange bitters.”  Purist though he is, one of Felten’s favorite “martinis” is from London’s Savory hotel:  2 oz gin, ½ oz vermouth and ¼ oz Dubonnet (rouge).

And Eric Asimov, the restaurant critic for the New York Times, did a very entertaining piece recently about his “80 martini lunch”.   It was a gin tasting event, and he too points out that real martinis are made with gin, which he calls “the thinking person’s spirit.”   So what’s the difference between gin and vodka?  Asimov explains that gin is infused with botanicals, the most prominent of which is juniper berries, while vodka is basically devoid of aroma or flavor.   The ratio of gin to vermouth?   About 4 parts gin to 1 part vermouth.

We confess however, that we much prefer vodka, and a little olive juice too, and we like our martini’s shaken.  So there you have it…the “imperfect martini for imperfect moms”. Get our recipe and watch the video for making the perfect dirty martini.

So pour yourself a martini (gin, vodka, stirred or shaken) and hold your glass high in a toast to all the imperfect Moms everywhere.

Have a great one.

P.S. If you’re looking for Mother’s Day gift ideas, check these out.