A Gripping Study of a Man on the Edge
Reviewed by Mr. Tomato 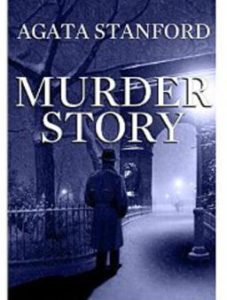 Murder Story, Agata Stanford’s 7th novel centers on writer Ernest Stringer’s emotional struggle five years after his critically acclaimed first novel was published. Although set in New York City in the roaring twenties, Dorothy Parker, the main character of her first six books, is not in this one. This intriguing story is a new direction for Agata; a gripping study of a man on the hairy edge of coming apart at the seams.

He meets Anthony Young, the prolific author of a bestselling mystery series. As regular patrons of the bohemian Romany Marie’s Café, Ernest and Anthony strike up an unusual friendship. Four other authors join in their talks on the art of mystery writing. They call themselves The Murder Club.

When they discuss the assertion made by Dostoyevsky’s Raskolnikov, in Crime and Punishment, “A criminal is caught because at the time of his crime he loses the ability to reason,” they ponder, if this holds true, how can one commit the perfect crime?

At that point, Earnest’s fragile psyche heads South and things get very complicated.

Murder Story is available from Amazon and other online booksellers.

Agata Stanford is an actress, director and playwright who grew up in New York City. While attending The School of Performing Arts, she would often walk past the Algonquin Hotel, which sparked her early interest in the legendary Algonquin Round Table. She has written seven plays and two musicals. She is currently at work on the next novel of her Dorothy Parker Mystery series.