Artichokes are at their seasonal peak right now and it is as if Mother Nature synchronized them with what we call Spring Fever, that feeling of love and romance that overcomes all of us as the days grow longer and warmer.

Eating an artichoke, pulling off the petals one by one to draw the pulp off between your teeth is such a sensual experience. I think eating anything with your hands is sensual, but artichokes are particularly so. They’re the unopened buds of a thistle. Isn’t that romantic?

You can make it easy on yourself and simply steam them, providing a little dish of melted butter or fruity olive oil in which to dip the meaty petals. Or you can fuss a little and try this recipe. I wasn’t going to put it on the web-site. It’s from my book Naples At Table, and besides that I would love it if you bought the book to get the recipe, as well as many others, there are only so many recipes my publisher will allow me to print here. So don’t rat on me. 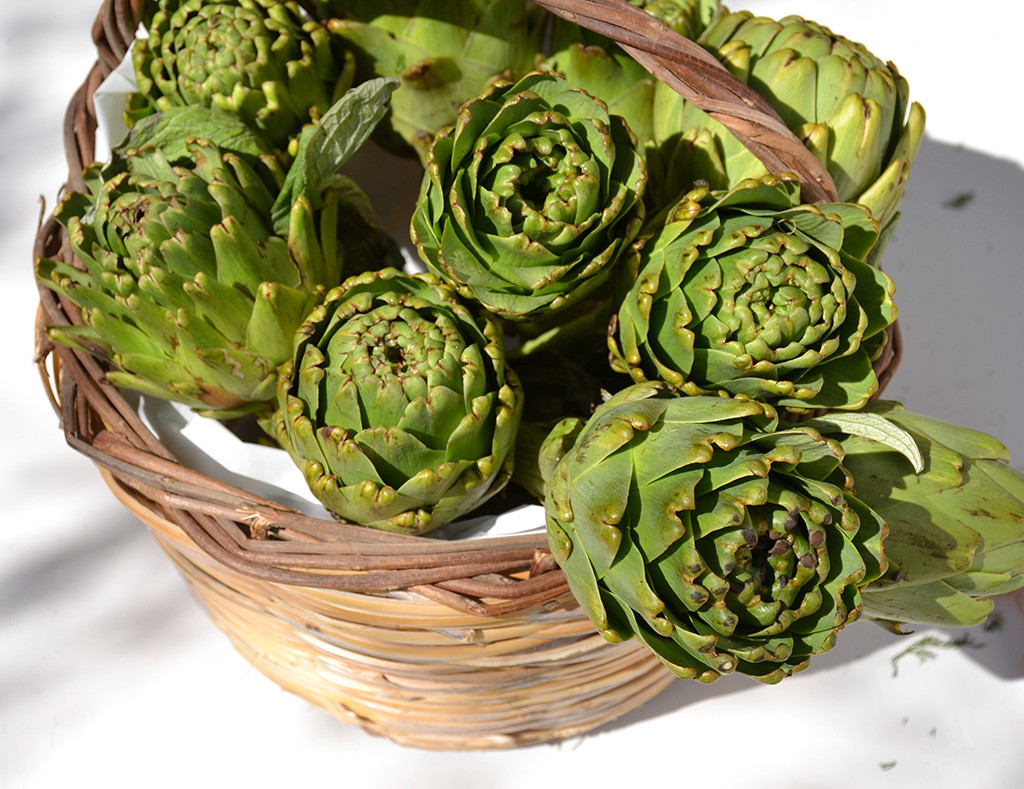 Large artichokes stuffed between the petals with bread and seasonings are a staple of the Italian-American kitchen. Where the more typical Neapolitan recipe differs is that the filling is based on mollica di pane, the doughy interior of the bread, not on dried breadcrumbs, as in the more typical American version. Mollica, used sparingly, with just a few seasoning ingredients – condimenti — produces a lighter stuffing, and lightness is the byword here. After immigration to the U.S., southern Italian food got heavier because the immigrants, mostly from the south, could now afford to put more ingredients in their cooking. This recipe is a good example of how less is more. In Italy, they would be served as an antipasto in a restaurant or for a feast meal. For everyday, a stuffed artichoke, then a hearty pasta or minestracould be the whole meal.

Before preparing the artichokes, squeeze the lemon into a large bowl or potful of cold water, reserving the juiced-out lemon halves.

To prepare the artichokes: Bend back and tear off the bottom leaves. With scissors, snip off the prickly tips of the outer leaves on the sides. Cut off the top 1/2 inch of leaves. Rub all cut leaves with a lemon half. Cut the stems off flush at the base and reserve the stems in the lemon water.

Spread the artichoke petals so you can get at the center of the artichoke and pluck out the prickly purple-tinged petals forming a cone. Then scrape out the fuzzy choke, using a teaspoon, serrated-tipped grapefruit spoon or melon baller. As you work, remember to rub all the cut surfaces with the juiced-out lemon halves to retard browning. As each artichoke is prepared, place it in the lemon-water.

With a sharp paring knife or swivel-bladed peeler, trim off the outside green layer of the stems and return them to the water.

To prepare the stuffing: Drain the capers and, if they are large, finely chop them. Place them in a mixing bowl with the chopped anchovies, parsley, and garlic.

Squeeze the water from the bread and chop it finely — it should be about a cup. Add it to the bowl with the other stuffing ingredients.

Finely dice the artichoke stems and add them to the stuffing mixture.

Drain the artichokes. With a teaspoon, and using about 1/3-cup of filling for each artichoke, stuff the bread mixture between as many of the leaves as you can, and put a small amount inside the central cavity. Try to distribute the filling as evenly as possible, working round and round the artichoke.

Place the artichokes upright in a 4- to 6-quart saucepan or casserole. Pour 1 cup of water around (not on) the artichokes. Over them, drizzle the remaining 2 tablespoons of olive oil. Sprinkle with salt and pepper, then the dry breadcrumbs, if using.

Bring the water to a boil over high heat then cover and adjust the heat so the water simmers gently. Cook for 45 minutes or until the artichokes are thoroughly tender. Check the amount of liquid in the pan after 20 minutes to make sure there is enough. Add a little more if necessary. Check the artichokes by tasting an outer leaf and by putting the point of a small, sharp knife in the base — it should penetrate easily.

If there is too much liquid when the artichokes are cooked, uncover the pan and let the liquid reduce over high heat for a few minutes. In the end, you should have a few tablespoons of liquid/oil in the bottom of the pan.

Serve warm or at room temperature, drizzling the remaining liquid over the artichokes before serving.