New at the Movies: Breathe 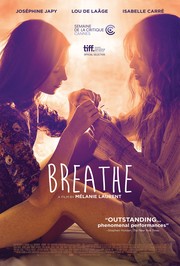 The French can make almost anything seem charming, including incest, as in Louis Malle’s Murmur of the Heart. In this story of a teenage girl with asthma, Breathe doesn’t veer away from tradition. The film unfurls narcissism mixed with codependence, a dash of cruelty at the hands of adolescent angst, and family dysfunction.

It mostly charms at the hands of the multi-talented Director, Mélanie Laurent, who, at 31, is also an actor, writer, and singer. She skillfully adapts the novel by Anne-Sophie Brasme, and coaxes performances so natural, you’ll forget you’re watching actors.

Unlike Americans, people from France display affection easily and relish in their joie de vivre to the point of envy. But exactly like us, when they withhold expressing uncomfortable feelings, it can lead to very painful consequences. After watching the thought-provoking Breathe, you’ll be thankful you’re not a teenager anymore.