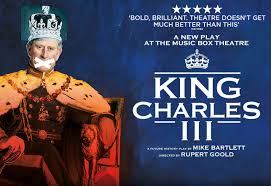 is written by Mike Bartlett and directed by Rupert Goold, with sets and costumes by Tom Scutt, and features Tim Pigott-Smith in the title role.

King Charles III is a clever piece of British theatre which clearly could delight anyone obsessed with stories about British royalty.
In this piece, we are projected into the future, a few years down the pike, during a time when Queen Elizabeth has departed the earth and her grip on the throne is released to her next in line son, Charles. But grand-son William and his savvy wife, Kate, have another scenario in mind. Meanwhile hapless Harry is hard at work trying to figure his life out.

There is a spectre (Princess Di floats by a couple of times spouting prophetic words), Greek chorus like chanting and sharp dialogue. The evening I saw it, some people in the audience were roaring with laughter and genuinely appearing to enjoy it.

Now, this piece is a full 2 hours and 30 minutes. I believe it could have been really great if a good 40 minutes were cut out. Seriously.

There was just too much talking and dialogue that felt tedious, at best. Couldn’t this play be one of those delicious 90 minute theatrical, no intermission pieces that we are seeing more and more? It’s not that I don’t have the attention span, it’s just that some of these plays simply don’t warrant the over writing.

Therese Raquin also features a spectre making a few appearances throughout the piece in a theatrical adaptation of the Emile Zola classic. It may very well be the liveliest part of this  long, very dark play. So dark, that everything is brown, all the time. The walls are brown. The costumes are brown. The sets are brown. The tablecloth is tan, but a hue of brown. We get it.  The story is dark. Young Therese (the luminous Keira Knightley) lives with her aunt (Judith Light) and her annoying mean and whiny cousin, Camille (Gabriel Ebert).

Her aunt arranges for the first cousins to marry, because that’s what people did in that era. Therese pretty much loathes Camille, but she says nothing and marries him anyway. The marriage is loveless and sexless and Therese is a shell of a person. She communicates mainly by deer-in-headlights expressions with her eyes because she barely speaks. That is, until she meets the charming, sexy and sexual Laurent, a friend of Camille’s. That’s when all Hell breaks loose. Their magnetic chemistry can not be contained, and the two become instant lovers. As the passion continues to heat up, Laurent declares that he must have Therese to himself. A plot to do away with Camille is hatched, the dastardly deed is done, and they expect to live happily ever after.  That was the plan, however, Therese can not bear the responsibility or her conscience. Rapturous love turns into intense hate. Madame Raquin overhears the two arguing about the murder, she is felled by a stroke, and she too, can only communicate with her eyes. I’m telling you this is really, really dark. And it’s also all about the eyes.  There is even more darkness, but I will leave it to you to continue the journey.

Camille’s spirit appears on several occasions, and I found myself kind of looking forward to hearing from the other side.

The fabulous Gabriel Ebert, who won a Tony for Matilda, portrays Camille in such a way that you are somewhat rooting for his demise. Matt Ryan is perfectly cast as the charismatic Laurent, Judith Light does a fine job as the overbearing aunt, and Keira Knightley, making her Broadway debut, is given a lot of room to speak without words, using those before referred to eye movements. Directed by Evan Cabnet, Therese Raquin can get a bit cartoon-ish from time to time. Maybe the adaptation was not quite sharp enough, or the direction was off.  In any case, this is another play that runs 2 hours and 30 minutes. Maybe it’s just too damn long.