Time is of the essence for both shows this week.

Be prepared to be immersed in the heavy material of Eugene O’Neill’s classic play, Long Days Journey into Night if you are intrigued by the prospect of seeing this classic piece of theatre. It is indeed a long journey as this play clocks in at nearly four hours in length.

The Roundabout Theatre Company’s production, directed by Jonathan Kent, really pulls you into the dysfunctional Tyrone family, and their endless struggles, challenges and drug and alcohol fueled
behaviors.

Thanks to the really smart set design by Tom Pye, the breeziness of the Tyrone’s summer home is well displayed,  creating the feeling of being a guest at a house by the shore in the early 1900’s,  complete
with rolling fog. I could almost smell the sea.

The ensemble is extremely strong. Led by the luminous Jessica Lange, it includes excellent acting by Gabriel Byrne, Michael Shannon and John Gallagher. Jr. This cast seemed very comfortable with each other, exhibiting a great deal of trust between everyone. You have to have that trust in order to perform long pieces of dialogue with a co-star. The concentration to deliver these lines and keep energy up for all those many hours is
an outstanding achievement.

The main story is the addiction to prescription drugs that has consumed Mary Tyrone (Jessica Lange) for years. It is a well known family secret that is  brought to light during this very long day.

Mary complains about being lonely, having no friends, and changing the path of her life to marry her husband.
The fallout from her addiction has wreaked havoc on the family and the various relationship challenges that exist are explored. Edmund, the couple’s younger son, is sick with consumption, a disease
that took the life of Mary’s father. 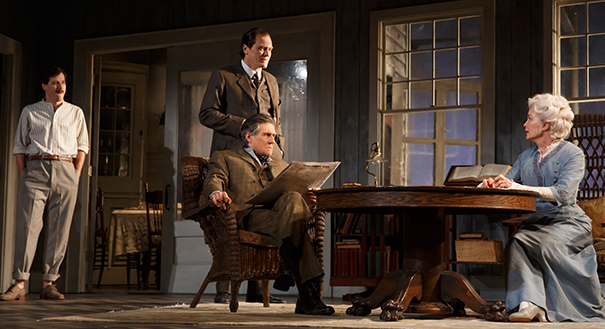 The plays conceived by our great classic playwrights were written at a time when people had few distractions or commitments, so time was luxurious.

It is difficult for people today to devote time and attention to such a lengthy play. And because of this, the great performances are to be applauded even more. If you find it a bit tedious to be engaged in this material for such a long time, consider the actors on stage delivering the dialogue. Gabriel Byrne is a great choice to play the husband and father, James Tyrone, providing depth and lightness throughout the piece.

Jessica Lange hit all the right notes in her portrayal of a fragile and flawed woman, held firmly in the clutch of the medication she downs to deaden her loneliness.

At intermission, the gentleman next to me asked if the character was possibly manic depressive, and perhaps this is why she indulged in the drugs.

“No,” I replied. “I think she is just so completely bored with her life.”

If you want to try to determine why Mary Tyrone embarked upon this addiction, as well as see this stellar cast,
head to the American Airlines Theatre.

****
Tuck Everlasting is a cute little musical with a very simple, simple story. There is a family, the Tucks, who live in the woods in a small town. They are nice people and also people who just don’t age.

They will never die, thanks to the water that they discovered in a spring and drank many years ago. The family remained their age at the time they drank the water and will remain so eternally.

They are always on the move for fear of people discovering their secret. One day, they meet a young girl who captures the family’s heart. Winnie Foster is an adventurous child, who lives with her over bearing mother and grandmother.  Wanting more, she runs away from home, and comes across the boyish teen Jesse Tuck and his family. She is only eleven, but Jesse feels when she hits eighteen, she would be a great mate for him. He invites her to drink the water in seven years.

What happens when this possibility is presented to her is what Tuck Everlasting is about. Would you want to live forever? 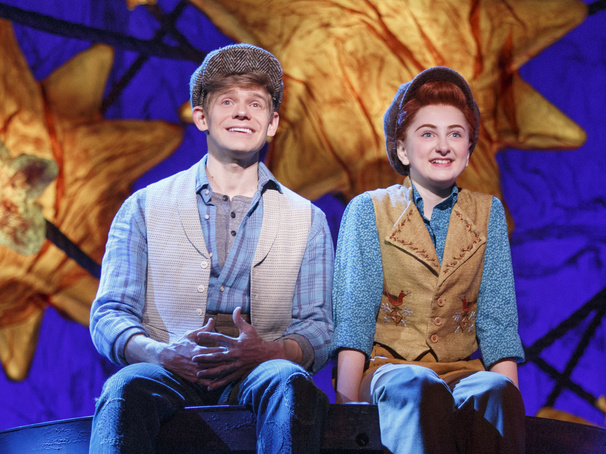 Directed and choreographed by Casey Nicholaw, the dance is an important part of the storytelling.

There is an interesting shift in the way the story is told (quite beautifully) in the second act. The book is by Claudia Shear and Tim Federle, music by Chris Miller and lyrics by Nathan Tysen. The score is sort of folksy, with lovely over tunes of Celtic melodies.

Principals include Carolee Carmello, Andrew Keenan-Bolger, Michael Park and Terrence Mann. Sarah Charles Lewis, making her Broadway debut at the age of 11 (like her character) plays Winnie and she is just wonderful. This new musical has beautiful scenic design by Walt Spangler.
The second act is quite lovely, with the afore-mentioned shift in storytelling that was a surprise, but also quite moving.

Tuck Everlasting is a sweet little show. But with all the really strong musicals on Broadway this season, I wonder how it will attract attention.

It comes down to family entertainment. If you are looking for a solid choice for the clan, Tuck Everlasting is a good candidate.