New on Broadway: Misery & The Illusionists

Gore, suspense, magic tricks… and even Liberace on Broadway

I never saw the film Misery but am well aware of the gory circumstances that unfold in this Stephen King story. Now on Broadway written by William Goldman (based on the Stephen King novel), and directed by Will Frears, the tale of obsessive fan-dom comes to life on stage.

“I’m your number one fan!” Annie Wilkes (Laurie Metcalf) proclaims to celebrity writer Paul Sheldon  (Bruce Willis) as he comes to consciousness in Annie’s home, following a car wreck she rescued him from.

Annie is a nurse, and lives near the inn in Silver Creek Colorado, where Paul Sheldon sometimes escapes to from New York, to finish his novels. Quirky, weird obsessed fan Annie loves the Misery Chastain character that Paul Sheldon created. She delights in playing Liberace records while reading and re-reading the novels about Misery.

The truth is Annie really is his number one fan, but we find out in short order that she has crossed the line from adoring to insane. The line blurs throughout the play. 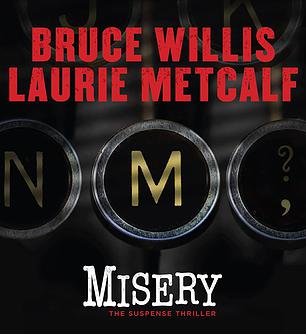 Misery is performed without an intermission, and explores all of the various depths of this relationship quite neatly, thanks to the marvelous Laurie Metcalf, who does all the work in this piece. She is able to carry the nuances, the insane episodes, the gut-wrenching anger, the sweet love, the rhapsody of intense admiration. She is diabolical, nurturing, psychotic, heart-breaking, and sometimes even funny.  In short, Laurie Metcalf does an amazing job.

Okay… Bruce Willis. First, although he is either in bed or in a wheelchair for most of the play, you can tell he is in great shape. He can express wry humor, but that is about it. While Laurie Metcalf exhibits an entire orchestra of emotions, Bruce is pretty much a one note samba.
Making his Broadway debut, he still seems to delight fans in the audience.
Also featured in Misery is Leon Addison Brown as Buster, the town sheriff. 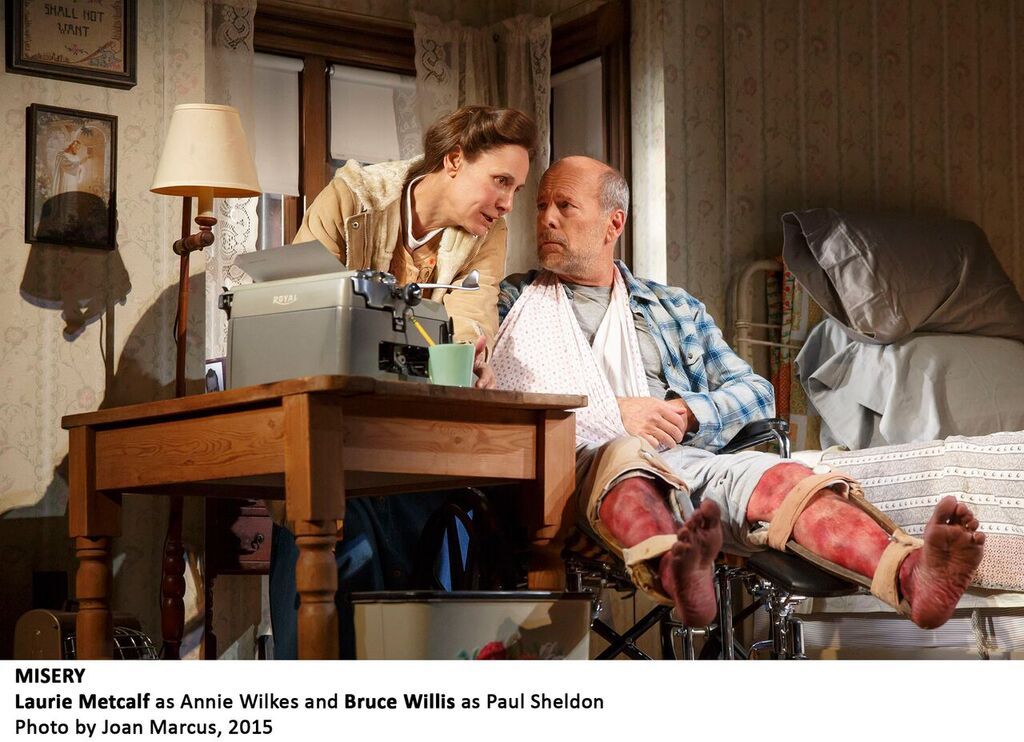 Although the movie delves much deeper into gore and horror, in this stage version, the audience is clearly engaged and on edge, knowing something truly terrible is about to occur.

You hear horrified gasps and even screams when Annie does her bidding to keep Paul in her house. Devilish black humor mixes with suspense and horror. With gorgeous sets by David Korin, Misery is slated to run through Feb 14, 2016.

Segueing from Liberace records in Misery, to a Liberace look-alike, hosting The Illusionists,
we go from suspense and horror to sometimes gory magic, elegant card tricks, amazing shadow puppets, loud music, cross-bow shootings, fire, disappearing acts, and lots and lots of audience interaction. It’s a magic show on Broadway! Does it belong here? That is certainly a point to argue. Much more of a Vegas type experience, yet this extravaganza seems to bring people through the door.

I can tell you the audience reaction was almost as entertaining as the show in this piece as well. The two more than middle aged ladies behind me felt compelled to keep their narrative going throughout the show, and I heard one say “this is crazy” at least 20 times throughout the two hour experience.

There are seven “illusionists,” all of them described by two words, like “The Deceptionist,” “The Daredevil,” and “The Futurist.”

Each illusionist performs his own specialty, either with the aid of a pretty “magician’s assistant,” or a carefully chosen audience member invited on stage, sometimes not English speaking, usually embarrassed.

Although at first I thought the show’s host Jeff Hobson,”The Trickster,” swathed in his Liberace style finery was going to be a cheesy performer, I realized he totally embraced that character and was actually quite entertaining, as he made fun of himself, often at the expense of a hapless audience member.

Some of the acts are truly amazing and unique. One is difficult to watch. Dan Sperry is “The Anti-Conjurer.” Think Marilyn Manson as a magician. His zombie like makeup, skinny body and greasy long spiked hair creates the perception of being anti-everything. However Dan is really good at promotion, social media and merchandising.  With 114,000 followers on Facebook, he is clearly adept at building a fan base, as he is the master of “shock illusion.”

But, the same two ladies behind me were grossed out by his act and couldn’t watch.
Suffice it to say, he swallows razor blades and cuts his arm with a knife, to reveal the coin that he made disappear through his eye socket. Thus the concept of being an anti-conjurer.

I am fascinated by how these tricks are accomplished, but they may be hard to watch for most. The audience was filled with little kids, by the way. I am not sure this is a show I would take children to see.

As the show opens on it’s seven “illusionists”, all male, I found myself wondering, when will we see an equally adept female magician/illusionist doing the tricks, instead of being the one who gets sawed in half, disappears, or gets shot at with an arrow while holding a balloon between her teeth?

For me, the best part of the show was the artful shadow puppetry performed toward the end of the experience by “The Unusualist,” Raymond Crowe, the cool illusions of “The Futurist,” Adam Trent, and the funny improvised comments from host Jeff Hobson. Ultimately, it seems that a magic trick from years ago, is still a magic trick of today.
Cards that come out of unusual places, quarters that show up (albeit in an arm), and people who appear and disappear. It’s just that on Broadway, the stakes are much higher.
The Illusionists, Live on Broadway, runs through January 3.