I had high expectations for two new pieces on Broadway; one a play, the other, a musical.

Let’s begin with the play, Sweat, by the Pulitzer Prize winning Lynn Nottage. Unfortunately, for me, this play (transferred from the Public Theatre) just did not live up to the hype.

Sweat tackles a lot of topics and covers a great deal of ground. I applaud the content, as Ms. Nottage absolutely addresses important and thought provoking topics, especially given our divided country, where job security and dying industries have become the mantra of the current administration and tapped into a groundswell of frustration.

Sweat opens in a jail with two young men discussing a crime that they committed some time ago.

What that crime is and the severity of it does not reveal itself until the end of the play.

And in between, we see a group of friends-factory workers in Reading, Pennsylvania, who assemble in a watering hole, and forge strong bonds there. The dwindling work, inevitable layoffs and picket lines at the factory cause friction between the group. And the despicable crime that was committed by the son’s of two of the women who hang at the bar, takes place because of tragic mis-directed anger. 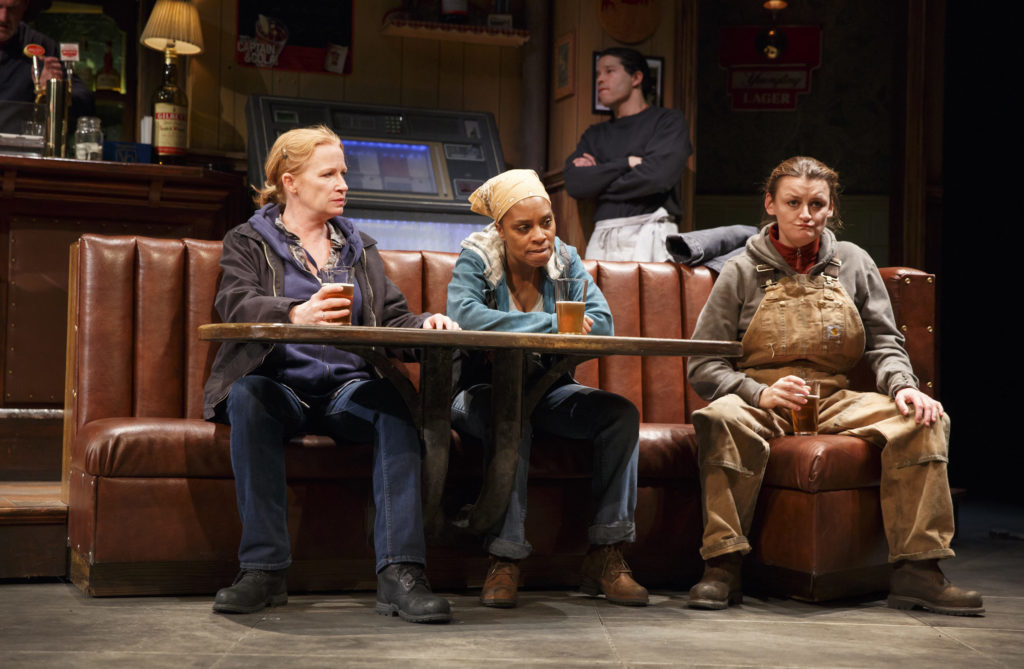 In this searing piece, Lynn Nottage taps into a deep, burning despair, anger and frustration that many people have felt throughout the country. Seeing it unfold on stage, with the backdrop of American politics in 2000 and 2008, when the play takes place, could be a very moving experience. But for me, it missed the mark.

My biggest issue is the length of the play and the repetition of themes and dialogue. With sharp edits, and some cut scenes, I think this could have worked so much better, delivering a much stronger impact. “Tedious” is a word I heard uttered by some audience members when leaving the theatre.

With terrific acting by all in the cast,  the last scenes become poignant, but I just wish I felt much more engaged earlier in the play.

Amélie. Ah, I love the premise here. A quirky, odd little girl becomes a quirky, odd young woman, living and working in Paris. Her solitary life is informed by her cold and odd parents, but she realizes that she can do good in the world by facilitating goodness to others. She observes humanity around her, but spends her nights in her flat, watching American tv dubbed into French.

This could have been a most charming piece, and one that I could fall in love with. But, alas, that was not the case. Like with Sweat (article above) Amélie missed the mark. I wanted to be enchanted and swept away on this young woman’s  journey. But perhaps the always on-the-nose references that are prevalent in the piece (like the ensemble gathering around Amélie with suitcases, bulging with hearts, which they open and close every time she sees the man that intrigues her) just diminish the delicate nature of the story.

Amélie is invested in being alone, staying solitary, observing life, until she realizes that she can effect change for others. But can she, or will she risk disappointment, further abandonment and possible pain if she falls in love? 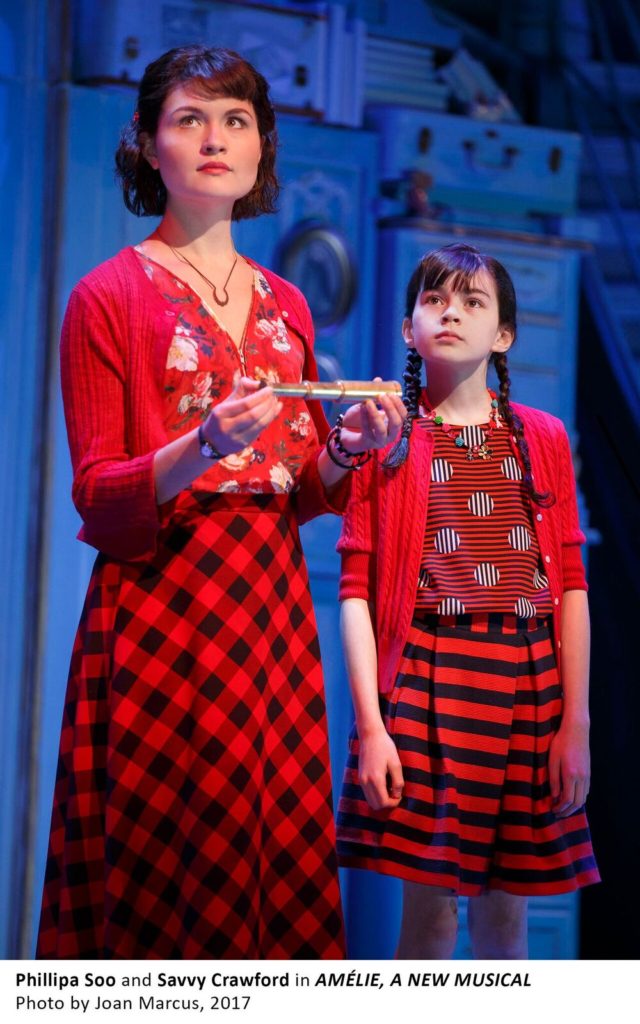 Amélie is played by the young and accomplished Philippa Soo. I loved her in Hamilton. But for this role, I think I would envision more depth of personality. It felt like she was technically performing the role of Amélie beautifully, but I never quite believed it. Nino, the man that Amélie is fascinated by, is performed by a fine Adam Chanler-Berat.

But between the two of them, there is little heat, or that magical stage moment where you believe they can actually fall in love.

Directed by Pam MacKinnon, with book by Craig Lucas, music by Daniel Messé and lyrics by Nathan Tyson and Daniel Messé, Amélie is based on the 2001 French film.

Amélie takes place from 1974 through 1997 and reflects on the Princess Diana era, and her subsequent tragic death. An Elton John impersonator (Randy Blair) makes a dynamic (and very purple) appearance, for an interesting pop in the show.

I wanted to have my heart racing just a little bit, which is always an indication that I am engaged with a piece of theatre, But sadly, for this one, it just didn’t.