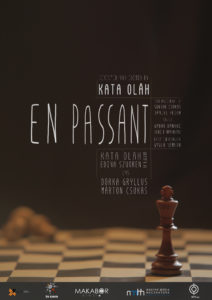 THE NEW YORK CITY FILM SCREENING IS SOLD OUT!

The Three Tomatoes and Merrill’s Girls are  delighted to present the first American screenings of the award-winning Hungarian Short Film “En Passant” written, directed and edited by Kata Olah  starring Hungarian film star Dorka Gryllus  and Marton Csukas .  This beautifully conceived and moving film reveals the often hidden terror of domestic violence. (The film will also be screened in LA on May 26. Click here for info.)

Andor is 13 years old. He has an exceptionally close relationship with his beautiful mum, whose eyes always hold secrets and hint of sadness. To flee from his unstable home and aggressive father, Andor chooses the objective and predictable world of chess. Then suddenly comes the jingle of his mother’s mobile and Andor must face a big decision. Within the shortest period of time the young boy becomes an adult.

Sometimes the stake of the game goes beyond victory.

Shockingly, in the U. S.,  1 out of 3 women are victims of domestic violence! The film will be followed by a panel discussion with the filmmaker, Kata Olah, and experts in domestic violence.

Join us for a powerful evening.

Buy tickets here.  For more information, or to pay by check email: tomato@thethreetomatoes.com

The event will be co-moderated by Cheryl Benton, The Three Tomatoes, and Merrill Stone, Merrill’s Girls.

About The Three Tomatoes Film Series: Our goal is to celebrate women with films featuring, written, produced, and/or directed by women over 40 that entertain, enlighten, and help close the gender gap that now exists in films.