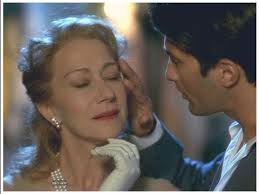 One of my favorite movies is The Roman Spring of Mrs. Stone, from the story by Tennessee Williams —the 1961 original starred Vivian Leigh, Warren Beatty and Lottie Lenya. The 2003 remake starred Helen Mirren, Oliver Martinez and Anne Bancroft.

SUMMARY OF THE FILM:

In Rome, the Contessa Magda Terribili-Gonzales is able to live a lavish lifestyle by foisting her small stable of young gigolos on wealthy and unsuspecting lonely women, or perhaps not so unsuspecting. She has a 50/50 agreement with those gigolos for any moneys received. One of those women is middle aged Broadway actress Karen Stone, who is at an age where she can no longer play the ingénue roles that made her famous. In combination with the recent death of her husband en route to Rome, Karen is feeling insecure in her career and life because of her age. The Contessa’s choice for Karen is Paolo di Leo. Although Karen is wary of Paolo, her loneliness does get the better of her as she embarks on a relationship with Paolo. In her somewhat outward happiness, Karen begins to sever ties with her old friends, who she believes will be judgmental. But Paolo is slightly different than the Contessa’s other gigolos. He in turn has an infatuation with Karen, who doesn’t lavish him with money as do most of the other women. This lack of money places a strain between Paolo and the Contessa, who wants her fair share and will do anything needed to make sure Paolo does his “job,” even at the expense of Karen’s mental state.

If you have not seen this film I recommend you choose a DVD of the remade version. I personally found the remake to be vastly superior. Helen and Oliver bring a dimensionality to their roles that I find lacking in Vivian and Warren. Warren especially, such a pretty boy indeed in this film, alas seems shallow and wooden–no pun intended. His Paulo is just not that interesting.

At one point Karen says to the Contessa, “Beautiful people make their own rules.” My comment: given that beauty does not last forever, beautiful person, try to have something else going for you–like a real personality!

As for the updated version, I agree with this assessment:

This beautifully costumed and photographed update of the 1961 film is vibrant, honest, and wonderfully acted. Helen Mirren’s performance as the aging actress is at times playful, as when she brushes off an old “friend” with a lie about having a tumor, and heart-breaking as when her eyes travel from the perfect body of her lover to her own arms and then breaks down. Unlike most Tennessee Williams’ works, “Stone” relies more on silences than on dialogue. Mirren registers every step in Karen’s journey from humiliated actress to grieving widow to woman in love to woman scorned. Anne Bancroft, as the Countess, is also dead-on. Her arch manipulation of Karen conceals a passionate outrage at her own poverty that pours out with devastating effect in the film’s final moments. Martinez and Santoro as the two young men are also effective.

Why am I telling you this? I recently left match.com and signed on for a month, as a test, with ourtime.com. Since it is widely promoted as an online dating service for those over 50, as in literally “our time,” I was taken aback to immediately y receive several emails, ”flirts” and “likes” from men of 50 and 60. Surprising myself, instead of ignoring them I actually wrote back to two of these men. I asked them if they were aware of my age, and that I did not lie about it, though I know I do look younger than my 74 years. And, if they did see how many years I have on them, why did they respond?

Both came back with cogent answers and said they responded deliberately and do want to explore the possibilities.

Like Karen Stone, I have a lot to offer. But do I want a man who can’t afford my lifestyle? Both men live out of state, both are ruggedly handsome, from their photos anyway, and gainfully employed but of modest means. I do suspect moving to Manhattan is a big enticement. I am a realist if nothing else.

So, being a realist: after three husbands, do I need yet another? At this stage I am most fortunate to have a thriving career, one that will hopefully continue for many years to come, and one that that brings me great joy. I have friends, family and two tiny dogsters I adore. So why am I considering complicating my life at this stage?

Okay wait, that is somewhat disingenuous. Yes, I need to be dating in order to write this column, but I am doing this for me as well. My rabbi friend Adam recently posed this question to me: Who is wise? Then he answered it himself, from the Torah: “He is wise who learns from everyone.” That truly means everyone –people we love, people we work with, people we see or meet on the street. And that is me: I am a sponge; I do learn from everyone. So why not learn from these younger men? I want to understand what motivates them, and especially, what they really want from me.

This is where the strange ending of The Roman Spring of Mrs. Stone comes to mind, again and again, hauntingly. It is the same in both versions. I will NOT spoil the film for you, but do rent or buy it. Then you’ll understand, and perhaps gift me with a comment on your interpretation of that event.

If you have already seen the movie, do share your thoughts.

And if you’ve made a relationship with a much younger person work—I’d love to hear about that too!