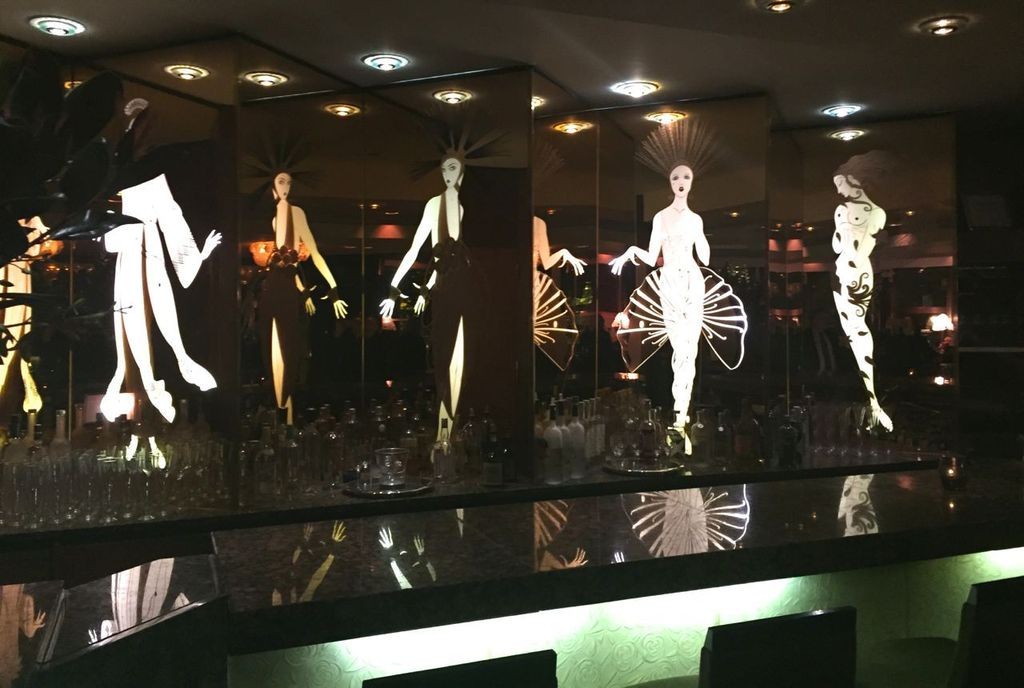 I loved the fantasy of Petrossian in 1984 when the two Petrossian brothers opened it in the handsome, landmark Alwyn Court. The flappers with dogs in Art Deco bronzes on the windowsills fascinated. There was an illuminated marble bar with Erte etchings engraved on the mirror. And suddenly, it seemed the only way to taste caviar was with a 24-karat gold paddle, like the one I’m holding tonight.

I’d not been to Petrossian in decades when the press agent called to say there was a new chef. The Caspian Sea had long ago run out of sturgeon eggs yet, it seemed that globally-raised swimmers now providing their roe were as expensive as ever. 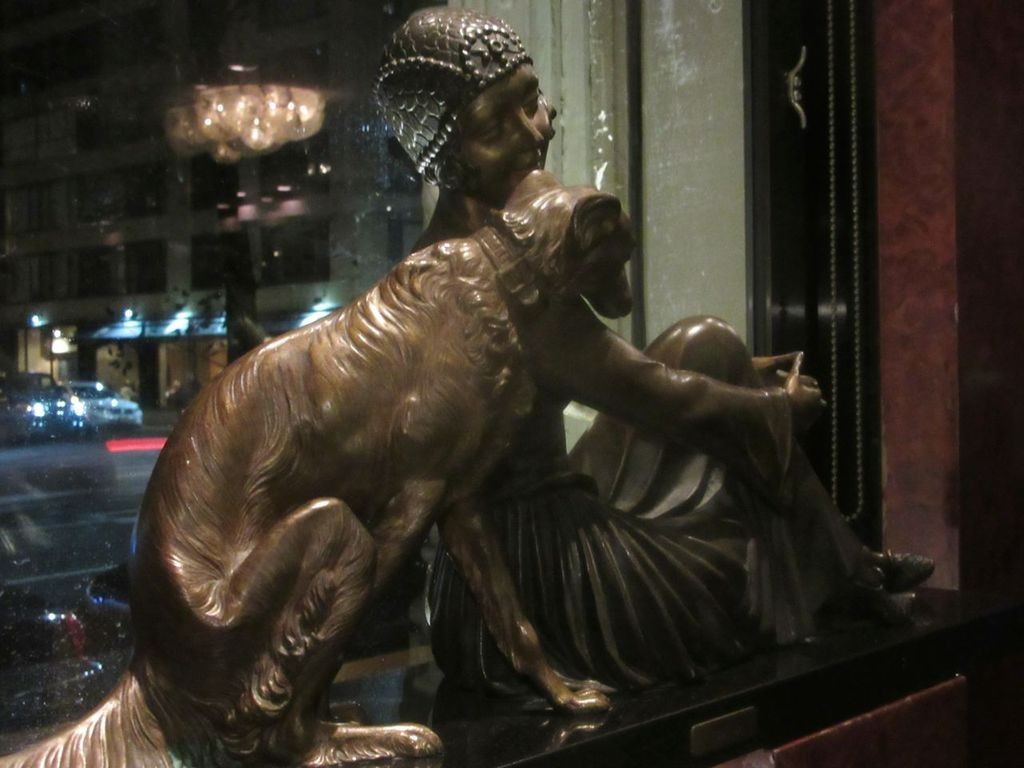 Petrossian’s gorgeous bronzes that I always loved are still here. Too heavy to steal, I guess.

Ironically, four of us arrived at Petrossian the very same day the Dow did its panicked flight. There were only three tables occupied. That was depressing all by itself. I wondered if they were deniers or defiers, too love-smitten to read the news or fully invested in gold. 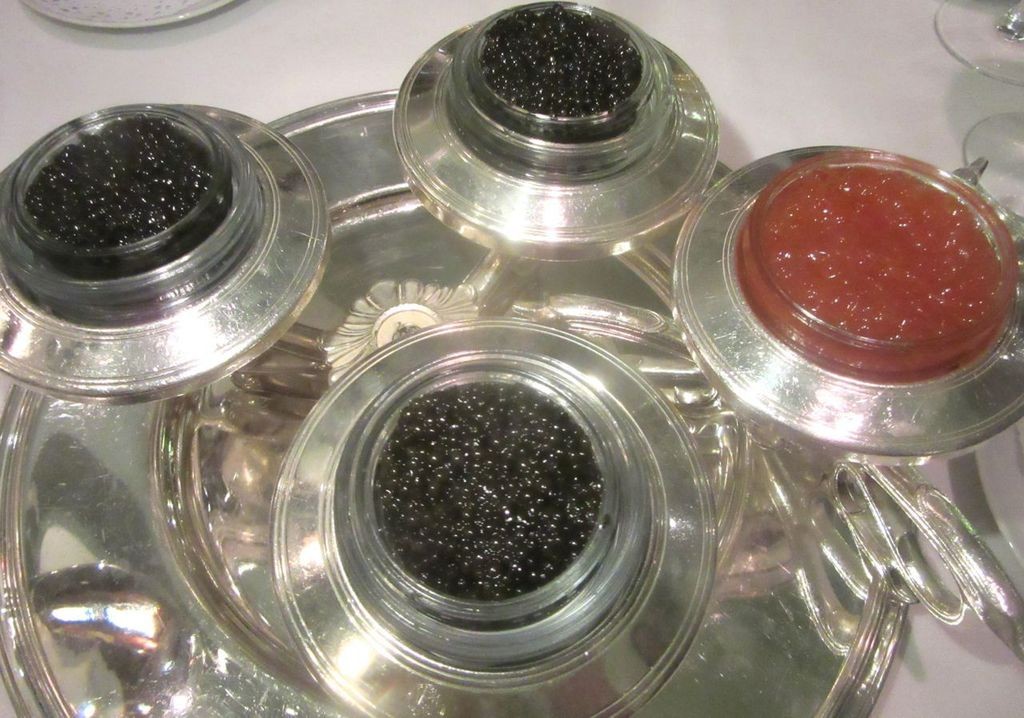 The four of us share 30 grams of the more modest caviars, plus 50 grams of salmon roe.

Even so, Wilfred and our friends were ready for a caviar splurge. Petrossian still has its Art Deco fittings and the golden paddles. We ordered 30 grams each of Transmontanus ($69), Royal Siberian ($91), and Royal Ossetra ($129) — plus 50 grams of salmon roe ($21), just for fun, served on a silver merry-go-round with crème fraîche in little timbales alongside.

Our server said toast and blini would be extra – but the big, soft, warm, tremulous blini and some very pallid toast points did not appear on the bill.  I dropped my portion of each caviar, one by one, on patches of blini, with and without crème fraîche, for comparison. The blini was as luscious as the caviar.

The wait for our starters after the caviar seemed unusually long. Maybe it was our captain’s fault. Maybe, the kitchen’s. My memories of pleasures at Caviar Russe would be tough to follow, even for a veteran like Richard Farnabe, the new chef. (He began his career with ten years under Michelin-starred Jacques Maximin, and worked for Daniel Boulud and Jean-Georges Vongerichten.) But maybe ordering just four dishes didn’t give him his best chance. 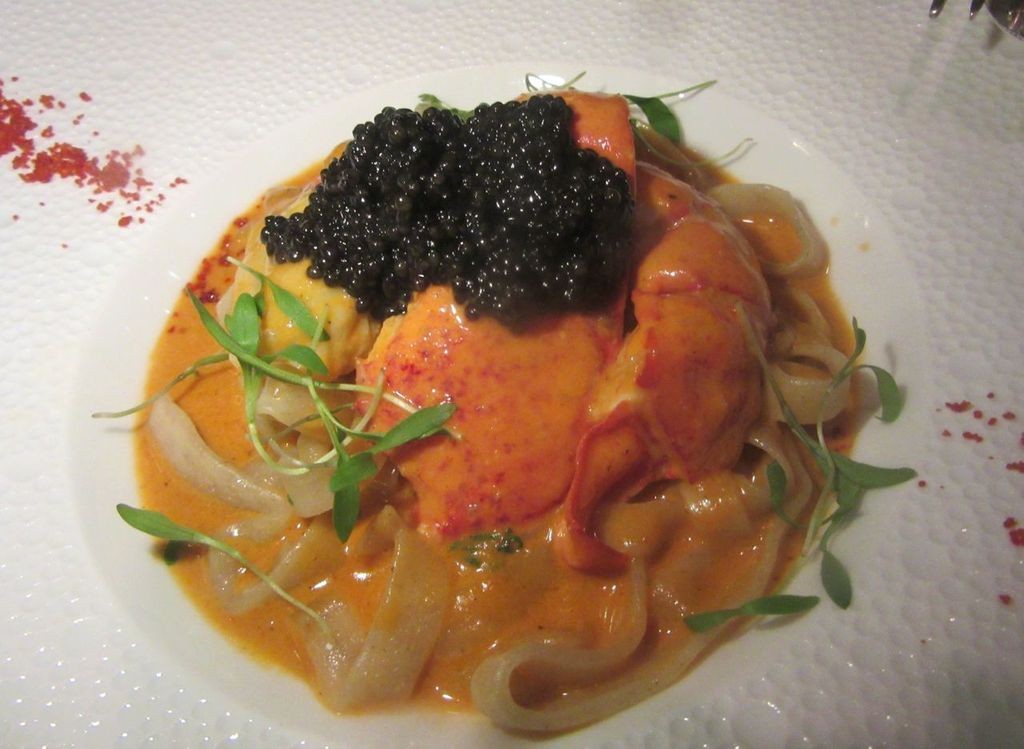 There was not much magic in Tuna Toro with caviar, a tight little cutlet of seared foie gras, and dabs of ponzu sauce.

I was not moved either by Scottish langoustines with very firm balls of pickled peach in a Jurançon broth.
Sea urchin, caviar, and beaucoup lobster. Of course, we’ll have the lobster tagliatelle.

No way our team could resist lobster tagliatelle with sea urchin and caviar. I might have liked more tagliatelle, but not those slightly tough noodles. For some reason, the claw and the small torso of lobster were impossible to cut with the knife.

My good mood was restored by the dry aged New York strip served with pomme soufflé and a wonderful tower of beef marrow and sunchokes under a crisp potato disc.  It occurred to me we might have ordered another two or three dishes. But my friends said they’d eaten enough.

I would not have chosen the milk chocolate ball infused with apple wood escorted by wood ice cream.  I only guessed I would hate wood in my dessert as much as snipped herbs.  The rich hazelnut Napoleon made up for that gaffe. And though the giant pink macaron looked somewhat primitive, combined with perfect raspberries and lychee rose water it was a pleasing finale. Total tab per person, $224.99.