Natasha, Pierre and the Great Comet of 1812.

If you can’t get in to Hamilton, and most likely you can’t, how about another historical Broadway musical with a duel?

For something very unique, inventive and immersive, the show to see is Natasha, Pierre and the Great Comet of 1812. It ran off-Broadway at a couple of different locations two years ago, and back then, received a lot of positive buzz. Now on Broadway at the Imperial Theatre, retro fitted to create a Russian salon, when you step beyond the lobby, you will feel as if you are stepping into a Russian time warp, complete with a myriad of period paintings hanging all around the theatre, beautiful crystal and bronze chandeliers, and plush, red  appointments all around. That’s the actual theatre. But getting there is another story. The producers want you to walk past drab, gray walls with Soviet posters and peeling paint. It is to get you into the mood of a different time and culture. Some of the audience members are directed a certain way to walk through this maze, on to the stage and then down into the cafe tables that are set up, surely an elaborate entrance for those seated in that particular area.

Once settled in, you will look around and realize you are in for a very different Broadway experience.
A spirited and enthusiastic cast of many (most of whom are making their Broadway debut) come out at the top of the show to engage with the audience, reminding theatre goers not to take photos, to turn cell phones off, and to not block the space around them because actors need to utilize all areas. If you are lucky, you will have a cute little package, which houses a fresh pierogie, thrown to you, (provided by the Russian Samovar Restaurant, as noted in the program.) 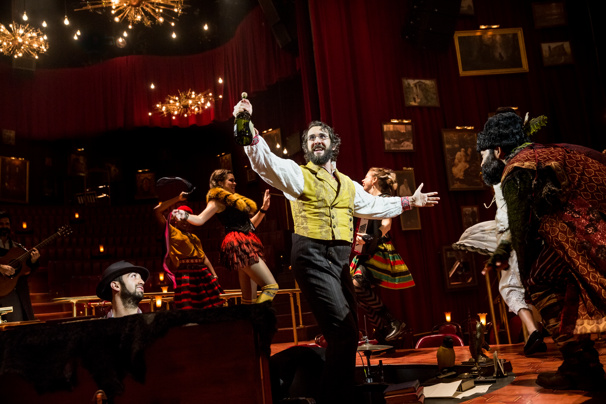 It was a comforting interactivity with the cast members, and that bond with the audience remained throughout the show. Now, what is this show about?

There is a comprehensive explanation in the Playbill complete with a family tree flow chart, if needed, but it is probably best to just follow the action, and the lyrics, because it really is an easier way to go.
(I did notice, however, that some people kept the page to the family tree chart open, to follow the who’s who of the show.)

Natasha, Pierre and the Great Comet of 1812 stars Josh Groban, but the night I was to go, Mr. Groban had fallen ill, and so we went to see the show minus Josh, but featuring Scott Stangland. I loved his performance and felt that he was perfect for the part. I couldn’t imagine Mr. Groban playing this character, quite honestly, because I liked Mr. Stangland (his stand-by) so much. However, I have read and heard rave reviews about Josh Groban, and hope to return to see him play this part of dark Pierre who is the moral conscience of the piece.  Pierre spends his day, reading, drinking and thinking about his wasteful life, and is the one who is Natasha’s champion.

Also starring in this piece is the luminous  Denée Benton as Natasha, who literally lights up the stage. She is fresh, beautiful, and has a lovely voice.  Lucas Steele, is Anatole, who steals the heart of Natasha, who is betrothed to Andrey, for whom she is waiting to return from the war. Additional stand outs are Brittain Ashford as Sonya and Amber Gray as Helene.  This pop opera, which centers around a small portion of the epic literary novel War and Peace, is about love and a triangle, passion, war, family, unrequited love, and kismet. Basically all of humanity’s issues are there for your enjoyment. 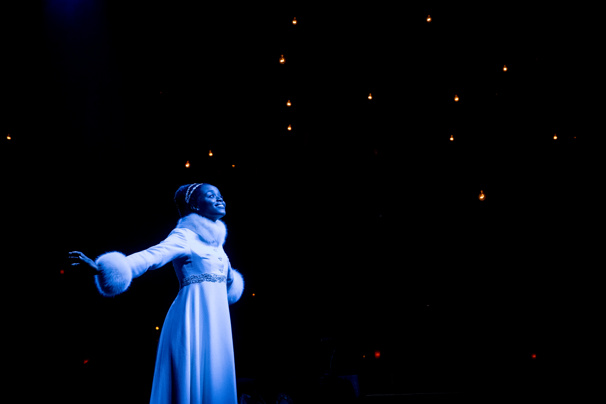 As I watched this musical/opera I thought about the talent it takes to create this piece. Dave Malloy wrote the story, music and lyrics. How insanely talented is this individual?

Lovingly directed by Rachel Chavkin, with choreography by Sam Pinkleton, the action of the show is dizzying, yet well executed. The awesome set design is by Mimi Lien. Be sure to look everywhere in the theatre, as you will be delighted with the attention paid to detail, which is all part of the design.

Natasha, Pierre and The Great Comet of 1812 is immersive, fun, moving, poignant and the music is really good. I highly recommend it.  A highlight of the Fall Broadway season.
http://greatcometbroadway.com/