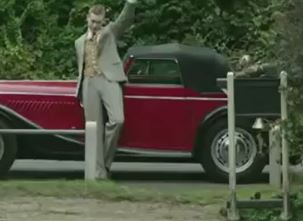 Even if you don’t remember the children’s gleeful screams, joyous after Hitler bombed their school in John Boorman’s Hope and Glory, you’re in for a treat. It’s 9 years later, and Boorman’s semi-autobiographical character is now 18 in Queen and Country, the writer/director’s delightful sequel.

This wholesome celebration of testosterone follows the lads during another war as they prepare to ship off to Korea. A handful of favorites (David Thewlis, Richard E. Grant, Sinéad Cusack and Brian F. O’Byrne) make up the cast, along with a crop of talented young actors, most notably Callum Turner as Bill Rohan.
It’s a leisurely, home-spun yarn of friendship and betrayal, where high jinks ensue with admonishments of venereal disease and a plotline tip-of-the-hat to Mr. Roberts. Beautifully shot and designed, its elegance is a befitting tribute to Boorman’s prolific career.