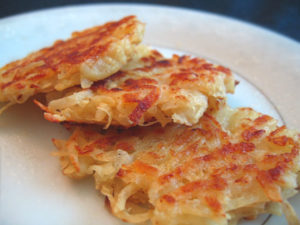 Night and Day. I am not the Arthur Schwartz that wrote that tune, but I am the Arthur Schwartz who has been singing it frequently lately. As in, Night and Day, that’s the difference between latkes made from fresh potatoes and onions and ones made from a dry mix. In the call of duty – it’s a hard job, but someone has to do it — I tried both the Streit’s and Manischewitz mixes. You add 2 eggs and water, let the batter stand until thickened, fry it in spoonfuls, and you get something resembling latkes. As someone who might even enjoy well-fried cardboard, I have to admit they are fun to eat. They are fried, which is of course in the spirit of Chanukah, when we celebrate the miracle of some holy oil lasting a week and not a day, as it should have. But they are not potato latkes. They don’t taste of potato. If you tasted them side by side with a real latke, as I did, you would also be singing that Arthur Schwartz song.

By the way, the Streit’s mix had an edge over the Manischewitz. The Steit’s had a slightly more fresh-like texture and a tiny bit more flavor. It could be that it just had a little more salt. I felt the directions on the box of Manischewitz were incorrect, too. It calls for one quarter cup more water than Streit’s and half the resting time. Even standing longer, the Manischewitz batter was too thin. Streit’s hedges on the water, calling for one quarter cup less but telling you that it may be necessary to add more. It wasn’t. Its proportion of water and standing time were perfect. For some reason, however, even bought in the same store, the Streit’s cost $2.99 while the Manischewitz cost $1.99. So which would I buy? I wouldn’t buy either.

To make the small amount of fresh latke batter that the mixes provide – about one pound of potato’s worth — is not much trouble, actually. With a food processor it’s pretty quick and easy. Latkes only get to be an ordeal if you have to make five pounds of potatoes or more and have to stand and fry the latkes for two hours while everyone else is enjoying them out of the pan and you are still at the stove frying them. I have been doing that on Chanukah for many years, when all my cousins gather. This year, however, it is just the immediate family and I am looking forward to making just a small batch while we are gathered in the kitchen. No big deal. I get to eat them out of the pan, too. Then we can sit down and eat other stuff. Not fried.

There are two basic schools of thought on potato pancakes. Either the potatoes are grated very fine on a box grater (or chopped fine with the metal blade of the food processor) and result in pancakes that are thin and crisp-edged. Or, the potatoes are grated on the coarsest side of a box grater (or with the grating blade of the processor) and turn out a thicker pancake that is crisp all over. My family goes for the former style. I can make those without any starch filler, or with either flour or matzoh meal. There is a recipe in Arthur Schwartz’s New York City Food that is nearly identical to the way I make them. It’s from my friend Steve Gold, who won a citywide latke contest with it and now markets it as “Ruthie and Gussie’s,” a frozen product, all ready to spoon out and fry. Steve adds baking powder and doesn’t bother to peel his potatoes. We both use a little starch – I like matzoh meal – because it promotes browning and crispness. But, so you don’t have to use too much starch, use russets (the dry-fleshed baking potato), not all-purpose or boiling type potatoes, and drain them well once grated. I find a little matzoh meal also makes a pancake that reheats better. I used to be against reheating latkes, but I know many people would gladly compromise slightly on the quality of their latkes for the sake of being able to sit down with the family. As I get older, I understand these things better. To reheat, put the pancakes on a rack in pan in a 425-degree oven for about 3 minutes.

Peel the onion and cut it in eighths.

Peel the potatoes and keep them in a bowl of cold water.

In a medium mixing bowl, beat the eggs together to mix well.

In the bowl of a food processor, fitted with the steel blade, pulse the onions, scraping them down a few times, until very finely chopped, almost a puree. Pour the onions into the beaten eggs and stir.

Chunk up the potatoes and, in the same processor bowl (no need to clean it), pulse the potatoes until very fine, but still with some texture. Pour the potatoes into a strainer placed over a bowl and press out excess water with a spatula. Put the potatoes into the egg-onion mixture. Add the matzoh meal, salt and pepper. Stir well and let stand while the oil is heating.

In a large skillet, over medium-high heat, heat about 1/8 inch of vegetable oil. Spoon out the batter, using a half a utility spoonful for each. The batter should sizzle, but not wildly, as soon as it hits the oil. If the edges of the batter separate, the oil is too hot. If there are just slight bubbles when the batter touches the oil, the oil is not yet hot enough. The first round of latkes is inevitably less good than later batches. Consider the first tries a “chef’s share.”

Fry the latkes for about 4 minutes on the first side, slightly less time on the second. They should be well-browned before turning them. Drain on absorbent paper or on a rack. Serve immediately.