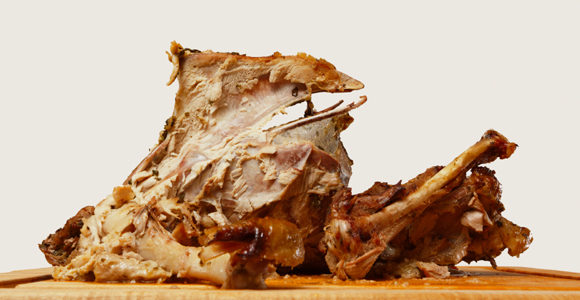 I truly could not care less about the turkey. There are too many other good things to eat on the Thanksgiving table. My position is: Now that turkey has become America’s diet food – all protein, hardly any fat (except from the skin) – it has lost all its special, festive connotations.

At any rate, that’s my rationalization for stuffing myself on stuffing and potatoes, not to mention my sister’s inevitably over-abundant appetizer table. There is plenty of time to eat the turkey after the feast. Like late tonight or tomorrow when you have that urge for the white bread or rye and mayonnaise that goes so very, very well with your freshly roasted bird.

I like turkey hash. And creamy casseroles. I even look forward to a soup made with the turkey carcass.

Here’s one old and one new (to me) turkey leftover recipe for the season.

The old one I call Peter’s Turkey Hash. My friend Peter’s mother, whose simple concoction it actually is, called it by a Yiddish name, but that name is not suitable for food literature or mixed company. This Yiddishe mamma did not cook. She overcooked. In this case, however, burned onions became one of the essential flavor elements of the dish. It is excellent as is, but I can also see it mixed with tiny cubes of potatoes, which I would fry separately, then blend in with the turkey and onions for the last few minutes of the cooking.

The second recipe, Impossible Turkey Pie, is from a collection of “Impossible Pie” recipes developed by the makers of Bisquick. I am supposing that everyone in America but me knew about Impossible Pies before last week when I discovered a cache of recipes that Bisquick sent me years ago. At least the millions who make Bisquick an essential in their pantry. No one who is Gastronomically Correct – in other words, a food elitist – would be caught dead with Bisquick in their cupboard, and I have to admit that although I do keep it on hand, it often goes rancid before I’ve used up the box. With a fresh supply, however, I managed to make the most delicious leftover recipe. Impossible Pies are almost anything you want them to be, a filling of meat, poultry, vegetable, fish, cheese … you name it … topped with a thin batter of Bisquick, eggs, and milk. The baked pie has a texture somewhere between custard and mashed potatoes. It’s sort of quiche-y, sort of like a moist biscuit. If you love your stuffing and dressing, you will love an Impossible Pie.

In this particular case, you take a couple of cups of shredded or cubed leftover turkey, fresh scallions, frozen peas and – Ecco! – you’ve got an amazingly comforting turkey leftover dish.

My friend’s Yiddishe mamma would not have used butter. Butter and turkey cannot be combined in a kosher kitchen. Maybe she used chicken fat. If you keep kosher, you could use all oil, or oil and margarine. The turkey skin is essential to the flavor. If you have extra, beyond what is attached to the portion of bird being used for the recipe, use it.

In a large skillet, heat the butter and oil together. Sauté onions over medium heat until beginning to brown.

Sprinkle on paprika and add garlic and turkey meat and skin. Continue to sauté until onions are very well browned. Some of them should be blackened.

Add the tomatoes, season to taste with salt and pepper and stir well. Cook 3 to 4 more minutes. Serve immediately with boiled rice or potatoes, as desired.

Instead of peas, you may want to use some leftover vegetables – stringbeans, broccoli or broccoli rabe, Brussels sprouts, etc. Indeed, instead of turkey, you could use allvegetables. Another idea: I had a small can of creamed corn in the cupboard, so I also made an Impossible Pie using the corn instead of some of the milk: I liquified the corn in the blender, then added enough milk (about 3/4 cup) to make up the liquid difference. It was fabulous with the taste of the corn framing the savor of the turkey and cheese. Another hint: If you toss the cheese with the turkey on the bottom of the pie, instead of layering the turkey on the bottom and the cheese on top of it, you’ll end up with a slightly more custardy layer on the bottom.

Sprinkle turkey, peas, onions, salt, and cheese into pie plate. Layer the ingredients or toss them together, as desired.

Beat milk, Bisquick and eggs for 15 seconds in a blender on high speed or for 1 minute with hand beater until smooth. Pour into pie plate.

Bake on the center rack of the oven until golden brown and a knife inserted halfway between center and edge comes out clean, about 30 to 35 minutes. Let stand at least 5 minutes before cutting. Refrigerate any remaining pie. It reheats well.