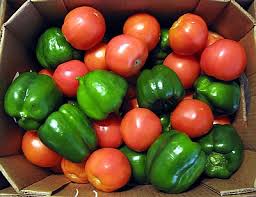 Fresh local tomatoes and peppers are in abundance and reasonably priced, so it’s a perfect time to whip up Arthur Schwartz’s recipes for homemade tomato sauce and a little Peperonata as an antipasto. 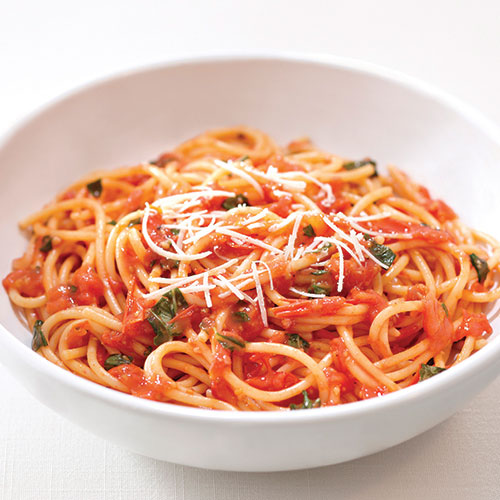 Makes enough sauce for 1 pound of spaghetti or macaroni

This is one of my favorite summer recipes. Use it when the tomatoes are really abundant and inexpensive, and when you’ve tired of eating them in salads, sandwiches and for their own sake. The only problem with this as a summer recipe is that you must have the oven on for at least two hours. So bake the tomatoes in the cool of morning. I’ve even tossed them with the spaghetti early in the day, then eaten the dish at room temperature in the evening. If you’re Italian, you may cringe at the thought of tepid pasta, but if you grew up, as I did, eating leftover sauced macaroni direct from the refrigerator, then this won’t seem strange at all. 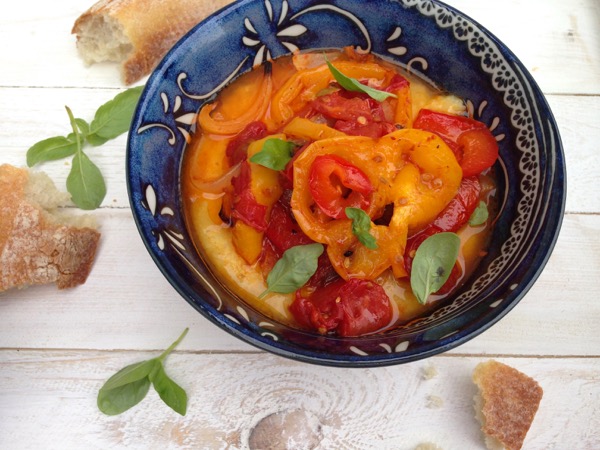 Serve Peperonata as an antipasto — with bread to mop up the juices — on toasted bread as a bruschetta topping, as a side dish to meat, poultry, fish or scrambled eggs, on macaroni as a sauce, or with cheese and other vegetables as a vegetarian meal.

Peel onions. Cut in half through the root end and slice thinly crosswise.

In a large pot with a cover, combine the onions and olive oil. Cook the onions over medium heat, stirring occasionally, until they are soft but not colored.

Meanwhile, prepare the peppers: Wash them. With a paring knife, cut them in half, then remove the cores, ribs and seeds. With a large knife, cut them lengthwise into 1/4-inch- to 1/2-inch-wide strips. You don’t have to be exact.

By the time the peppers are prepared, the onions should be soft. Add the peppers and mix well with the onions. Cook the peppers while preparing the tomatoes, about 5 minutes or so, stirring them a couple of times.

Add the tomatoes to the onions and peppers. Season with salt. Cover the pot and let simmer at a perky pace for about 20 minutes, stirring a couple of times with a wooden spoon.

When done, the peppers should be wilted but still with a tiny snap. Taste to check. They’ll continue to soften as they cool.

If necessary, because there is too much liquid, uncover the pot for the second half of the cooking time. The peperonata should not be too soupy. The liquid should have a saucy consistency.

Stir in basil for last 2 or 3 minutes of cooking. Season to taste with freshly ground pepper – a few turns of the peppermill should be enough.

Serve hot, at room temperature, or cool, but not cold.

Note: It is not necessary to peel the tomatoes for this recipe – that is, if you don’t mind tomato skins. Some people feel they are unsightly or indigestible. To peel a tomato, place in boiling water for 60 seconds. Remove and let cool enough to handle. Cut a slit in skin near core. Skin should pull right off. If it doesn’t, forget it and don’t worry about it.