What could be more American than the Fourth of July (besides guns and monster trucks)?

During my trip to Greenville, South Carolina, it wasn’t surprising to discover they had a minor league team (a farm team for the Boston Red Sox). What I didn’t know until I perused my hotel’s What to Do In Greenville magazine, was that Pickens County was the home of Shoeless Joe Jackson.

Baseball…Chicago connection…I felt charged with the mission of visiting his modest home, now a folksy sort of mini-museum, re-located to rest across the street from where The Drive play in a replica of Fenway Park; Green Monster left field wall and all.

They offered free tours of the house given by a volunteer docent; a very fit septuagenarian with a great memory for facts and an even greater appreciation for the extraordinary life and character of Greenville’s favorite son.

Walking up the few steps, then through the doorway, of this modest home, I was quickly bathed in cool, air-conditioned air. Beyond being a repository for memorabilia and a retail outlet for Shoeless Joe tees, coffee mugs and baseball caps, the tiny residence served as a welcome refuge on this muggy June afternoon.

The docent greeted visitors and asked where we were from. Then he pointed out Joe as a young player from a selection of team photos that hung on a nearby wall.

He handed us tri-fold cream colored brochures that captured most of the factoids, but I couldn’t take my attention away from him. His words spilled out like a testimonial from a faithful friend.

I knew that Joe Jackson, who, we were told, hated the nickname Shoeless Joe, was supposed to have remarkable baseball skills, but he sounded positively Paul Bunyan-esque.

From a poor, rural family, he went to work for a local mill, sweeping the cotton dust off the floor at six. By 13, he was playing baseball for their company team and was such a noticeable talent, his brothers used to try collecting tips from people who came to watch him play.

From his position in left field, he could throw the ball 400 feet to home plate where the runner could be tagged OUT — without a single bounce.

He batted .408 his rookie year (1911), the highest batting average claimed by a rookie. He finished his short-lived career with a batting average of .356, the third highest in baseball history.

Our guide set a little backdrop for the story of the 1919 scandal, the year Chicago’s south side team was called the Black Sox.

The sport of baseball was slanted a lot to benefit the owners. Many took advantage of their players. Owner of the White Sox, Charles Comiskey, was known to be especially cheap.

According to our guide, some of Joe’s teammates wanted to enlist Joe in a scam to throw the World Series, for which they were heavy favorites, so that they could make some money from bookies.

That star players could make more money from this scheme than they could from their salaries or endorsements reflects the huge change in the economics of sports.

The docent’s voice was unwavering as he told the rest of the story; how Joe Jackson refused to be in on the scheme, how his performance for the series was not one that reflects anything but a desire to win; how Joe Jackson and seven of his teammates were banished from baseball to send a no-tolerance message.

Standing in his parlor, in front of his favorite bat, Black Betsy, and radio, I felt his presence. I felt that he was at peace. He defended himself. He spoke his truth and the sons of his neighbors still think of him as a kind man and incredible athlete.

I think that somehow he was redeemed by the faith of Greenville.

I’ve been thinking about this encounter with the spirit of Joe Jackson.

I’ve been thinking that our national celebration is as much about the possibility for Redemption as it is about independence.

It seems important to Americans to remember the spirit of unsurpassed potential this country was born with and, not withstanding our many failings, embrace our potential as our guide in moving forward.

Believing that you can live up to your promise is no small (American) thing. 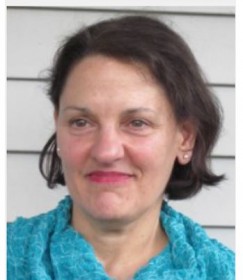 Deborah Hawkins has been blogging on gratitude and mindfulness for over a decade, posting over 500 essays. In December of 2019, she brought out two books, The Best of No Small Thing — Mindful Meditations, a collection of favorite blogs, and Practice Gratitude: Transform Your Life — Making the Uplifting Experience of Gratitude Intentional, a workbook on her process. Through her books, classes, and coaching, she teaches people how to identify things to be grateful for in everyday experiences.