Relationships and Humor: Books We Recommend

We’re avid readers, and one of the perks of publishing The Three Tomatoes is we get books –  lots and lots of books.  And the ones we enjoy, and think you will too, we personally review here.  Here’s a diverse trio today – a very humorous book, and two books about relationships – a memoir and a book of short stories.

What Words Should Mean 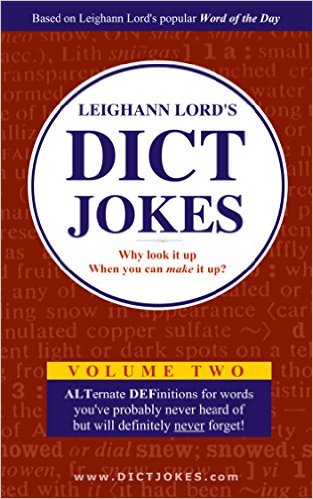 We’re huge fans of comedian Leighann Lord. You may have seen her on ABC’s The View, Comedy Central, Lifetime, ABC, and HBO. She has performed for audiences around the world at colleges, comedy clubs, theaters, and war zones. She’s funny.  Smart funny which is the best kind.  And her book, Dict Jokes, ALTernate DEFinitions for Words You’ve Probably Never Heard of But Will Definitely Never Forget is funny and smart.  In Dict Jokes, she creates new definitions for words based on what they sound like.  For example, “winsome” – something you sometimes do in Las Vegas.  And “FORTE” –  the average age of a mid-life crisis.  Based on her popular Word of the Day (WOTD) Leighann gives you a word, its real definition, and then her alternate definition (#ALTDEF). This is what a stand-up comedian, writer, and degree-holding English major does for fun. The words in “Dict Jokes” will get you grinning, giggling, and guffawing! You will truly laugh out loud and want to read these definitions out loud to your friends too.   This is a great gift book . Get the paperback version here.  Available in Kindle format at Amazon.

An Uncomfortable Book About Relationships 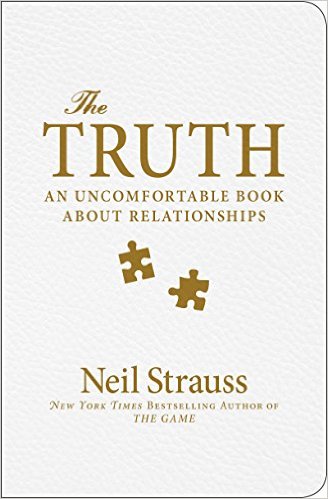 I’ll admit it.  Before reading The Truth, An Uncomfortable Book About Relationships, I had never heard of the author Neil Strauss, a Rolling Stone editor, and author of several books, including the bestseller, ‘The Game” where he shares how he went from being a shy loser in the dating game, to a master at picking up women.  But now, after reading his latest memoir, I know just about everything there is to know about Neil Strauss, whether I wanted to or not.  But I must say, I found his book riveting, infuriating, funny, witty, and dare I say “educational”?

When the book starts, Neil is in rehab for sexual addiction.  Seems he finally met a woman he really cares about and had been in a relationship with her for a while, but there’s one little problem –  he keeps cheating on her and she finds out.  If you ever wanted to know what sex rehab is like, let’s put it this way –  it ain’t pretty – you’ll feel every pain with Neil as he uncovers some truths about his childhood that have contributed to his intimacy problems.  But his stint in rehab really makes him question if monogamy is even a natural state, and aren’t there other ways to find intimacy but also have sexual freedom.

Thus starts his quest, which leads him to exploring all kinds of relationships in sexual subcultures that were a revelation to us.  Like free love cults, and then his really very humorous attempt to have a “harem” which fails miserably, and then what seems like the “ideal” relationship with a woman who is his female counterpart in wanting “sexual” freedom, which suddenly doesn’t feel so ideal when she explores hers.  All of which leads him back into therapy –  lots of it –  as he learns the uncomfortable truths about himself.  Oh, and there is a happy ending.  Get the book at Amazon. 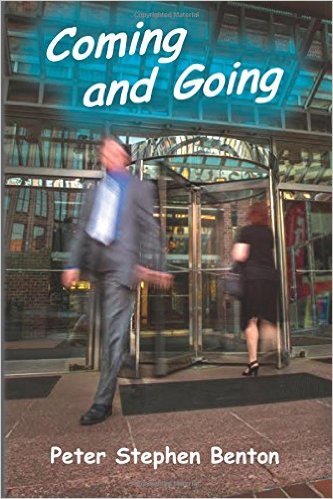 The short story is truly an art form unto itself.  It’s not easy to create fully formed characters and plot lines with a beginning, middle and end in the course of just a few thousand words, but in Coming and Going, Peter Stephen Benton has created five exceedingly entertaining and exciting stories that explore relationships between men and women; each tale spiced with varying flavors of mystery, intrigue, and passion. In “The Village,” the narrator, accompanied by his wife, visits a living museum depicting an early nineteenth century New England town where he encounters an old, but certainly not forgotten lover. “Room 24” finds happily married Brian Winslow unknowingly transported to the Battle of Concord in April of 1775 where he is inexplicably attracted to the affections of a hauntingly familiar woman. A fond reminiscence of neighborhood and childhood experiences in “Ties” is the backdrop for Joe Bradford’s emotional reunion with a cherished friend, Molly Buckley. “Wallpaper” brings out the best, and worse in the confusing juxtaposition of wife and old flame for Tom Arnett who gets a dose of the old adage, “Be careful what you wish for.” Finally, author Blake Sheppard has the voyage of his life in “Novelist,” when reality and the world and people he has created, particularly his imagined perfect lover, become intertwined in a thriller involving danger, desire, and a fatalistic future aboard the Queen Mary II.

This is perfect book for bedtime readers, but caution: you may not be able to stop at just one story a night.  Get the book now at Amazon.