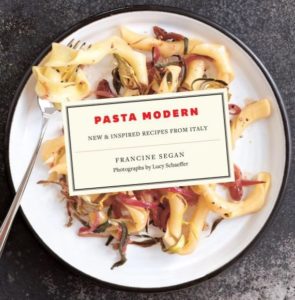 I spent a delightful day in Piedmont, outside the town of Turin, with chef Davide Scabin whose two Michelin star restaurant Combal.Zero http://www.combal.org/ is called “life changing” by Food and Wine Magazine. He shared several intriguing recipes that are popular in Italy today, like using pasta instead of rice for Pasta Sushi! 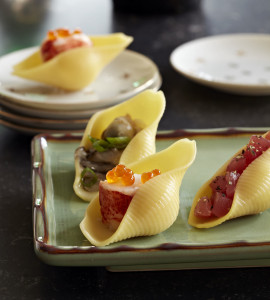 Chef Scabin introduced me to what is now one of my favorite pastas–Felicetti Monograno http://www.monogranofelicetti.com/en that is made with whole grain flours including kamut, farro and spelt. Chef Scabin recounted the funny story about how he himself first discovered the pasta just a few years ago. 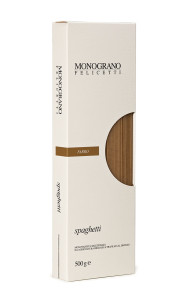 A guest came to his restaurant’s famed 10-course tasting, thoroughly enjoyed the meal, but asked Scabin why there wasn’t a pasta dish on the tasting menu. “Because pasta is banal,” answered Scabin. The guest nodded and made a reservation to come back the next month.  When the guest returned, he handed Scabin a box of squid ink pasta, asking him to “debanalify” it. The guest, unbeknownst to Chef Scabin, was Riccardo Felicetti, owner of one of Italy’s most renowned pasta companies.

That day sparked a long creative relationship between Felicetti and Chef Scabin resulting in many innovative recipes. One of my favorites is Scabin’s recipe Spaghetti Pizza, (recipe below) spaghetti laid out straight in quirky alternating strips of black squid ink and white pasta. Scabin calls it “pizza” because the dish has all the flavors of traditional Neapolitan pizza, but with pasta in a totally wild format. The little touch of anchovy usually found on pizza is replaced with Felicetti’s fabulous briny squid ink pasta. 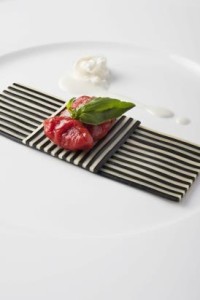 Toss the tomatoes with 3 tablespoons of olive oil, salt and sugar and bake at for 1 hour. Remove from the oven and keep warm. Remove the skins, if you like: they’ll slide off easily once cooked.

Meanwhile combine the cream and burrata cheese in a bowl, let rest at room temperature for 1 hour. (If using mozzarella, which is firmer than burrata, pulse the mixture in a food processor to combine.)

Bring about 2 inches of salted water to a boil in two separate frying pans. Cut both types of spaghetti in half and cook each in its own pan until al dente, then drain. Put each type of pasta in its own bowl, toss with a tablespoon of oil and add some cold water so it doesn’t stick as you assemble.

Coat each serving plate lightly with oil. Place the pasta strands onto each plate one by one, alternating black and white strands, laid out straight, until you have a pasta “plank” about 3 inches wide (you can make it larger if you like, just scale your ingredients). Lightly spray with olive oil. (If you’d like, to create a top section as shown in the picture, just cut the pasta into shorter strands and then alternate strands on top at a right angle.) You can do this ahead of time, and leave the plates, covered in wax paper, at room temperature, until ready to serve.

To serve, top the spaghetti with the warm tomatoes and garnish with basil leaves. Drizzle the burrata cream on the side of the plate, drizzling it with a touch of olive oil.

Chef Scabin seasons the shells with a splash of rice vinegar and few drops of mirin, a sweet Japanese rice wine, then lets his imagination rip, filling the shells with any sort of seafood, cooked or raw, garnished in myriad ways. Try combos—like poached lobster topped with caviar, diced tuna, or a raw oyster—or create your own. You can fill them all the same, or make an assortment, just calculate about 4 pasta shells per serving and a heaping tablespoon of filling for each.

Chef Scabin loves the idea because it showcases how versatile Italian pasta is and how easily it crosses over into other cuisines. I love it because now I can make my own Italian-style sushi at home in minutes!

Suggestions for the filling

Suggestions for the garnish :

Boil the pasta shells in salted water until al dente. Drain and toss with a splash, to taste, of lemon and Marsala. Spread out onto a plate and let cool to room temperature.

Fill each shell with a tablespoon of filling. Garnish and season, as you like.