What do you get when you combine a full orchestra playing classical music morphing into classic rock, over 25 choir members, a massive stage with background projections, some super talented singers who can sing rock and classical, and put them all on stage at the Broadway Theatre? You get Rocktopia, which is basically a concert with a very specific formula; classical music vs classic rock, one song after the other.

As the orchestra plays, and the singers sing full out, the overall presentation in Rocktopia is very big and dramatic. As an example, Mairead Nesbitt, the wonderful featured violinist, plays her violin at a jaunty angle, her legs firmly planted on the stage, her long platinum hair thrown about, as she vigorously plays her violin during almost every song. I kept wondering how she keeps her arms up for so long.

There is no question that the talent of the star singers run deep, especially the exquisite Alyson Cambridge, the stunning opera singer in the bunch who is simply spectacular. But the formula got old pretty quickly, and I did not agree with some of the rock selections. If I never hear Another Brick in The Wall or Kashmir again, I could be perfectly happily.

And I kept looking around the theatre, up at the ceiling, at the lights, because I was feeling rather bored during most of the first part of the show. Yes, there is an intermission.

However, there are some very, very bright moments. The last song performed before the end of the first act (for lack of a better description), is the gorgeous and moving aria, Nessun Dorma. When all the singers assembled on the stage to sing it together, it was magical. And I was on my feet for that. And for me, Nessun Dorma is the reason to see the show. I actually enjoyed the classical music selections much more than the classic rock. I was probably in the minority.

But here’s what is really curious.

No words were uttered by any of the performers until almost 3/4 of the way through the show. That’s when Rob Evan, one of the creators, as well as one of the performers, welcomes the audience.  Yes, it was nearing the the end of the show when he talked about how classical composers like Mozart and Beethoven were considered rock stars in their time.

He was charming and it was great to hear someone actually speak. I just wish we had heard from him way, way sooner.

The second “act” of Rocktopia did improve for me, with better selections, and better blending, like Rhapsody in Blue paired with Bohemian Rhapsody, which was just great. 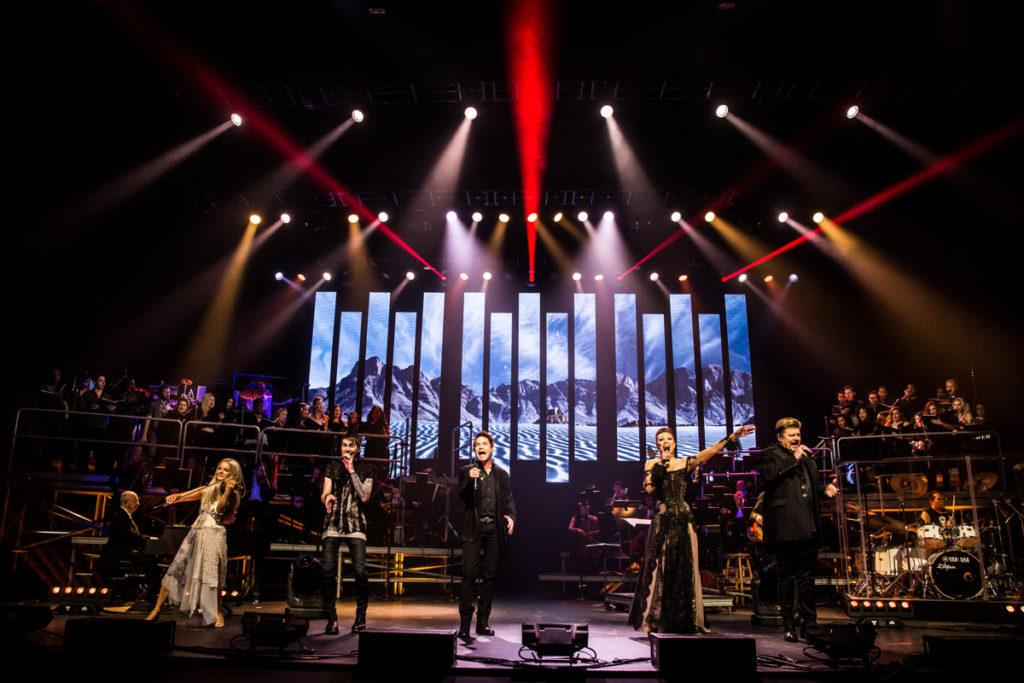 The images projected during the second half actually have a point of view too. As I started getting into the Rocktopia groove, I enjoyed the music more and wanted to refer to my program to remind myself about the different symphonies and songs I had just heard. But, sadly, for some unknown reason, there is no listing of the music in the show. I was very disappointed because I wanted to reflect on the various selections. I guess I’ll have to purchase the sound track from the show to do so.

The night I saw Rocktopia, Pat Monahan from Train was a featured guest performer, making his Broadway debut. Dee Snider takes over on April 9 and Robin Zander of Cheap Trick on April 23.

Along with the engaging Rob Evan, the conductor, Maestro Randall Craig Fleischer conceived of this show.

Look, it surely was interesting hearing the genres mixed, matched and mashed up, and enjoying the incredible voices of the featured singers: Rob Evan, Chloe Lowery, Tony Vincent, Kimberly Nichole, Alyson Cambridge and guest performer Pat Monahan, as well as the impressive New York Contemporary Choir, the New York Contemporary Symphony Orchestra  and fabulous featured musicians: Mairead Nesbitt, Tony Bruno, Henry Aronson, Mat Fieldes and Alex Alexander. But I really would have liked a little bit of commentary, narration or dialogue from the performers. Some words about the music, the musicians, why they created this “classical revolution.” Just something providing a framework.  https://rocktopia.com/