Saffron Burrows in JACKIE UNVEILED at The Wallis 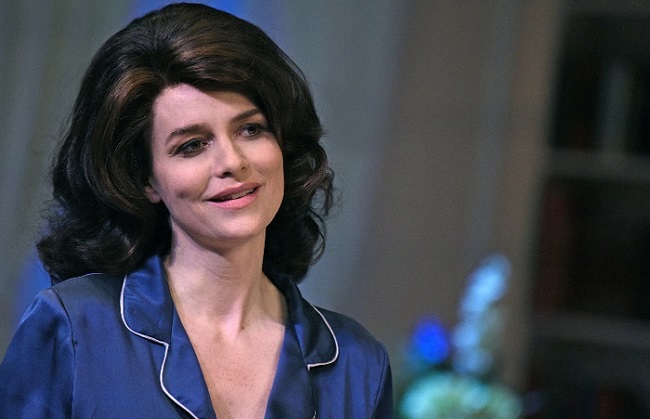 The fascination with Jacqueline Kennedy Onassis continues in Tom Dugan’s new solo play Jackie Unveiled, now playing at the Wallis Annenberg Center for the Performing Arts. Directed by Jenny Sullivan and starring Mozart in the Jungle’s Saffron Burrows, the play takes place at two different times in the former first lady’s life: the night her brother-in-law (and secret lover) Bobby Kennedy was assassinated and, 26 years later, on the day she waits to hear if her cancer has returned.

Bobby and Jackie’s not-so-secret affair is one of the most shocking things she talks about in the play, although if you’ve read C. David Heymann’s Bobby and Jackie: A Love Story, you’re ahead of the game. According to the book, Bobby was her one true love and the man who shielded her from a world giddy to invade her privacy.

As she contemplates suicide, a distraught Jackie asks the audience to be her confessor. What follows is a series of heartbreaking stories about meeting Jack and his powerful family, losing her virginity, her own dysfunctional family, and how she felt about her husband’s numerous affairs. Though humiliated, she never left him saying, “Would you give up your front row seat to history?”

In Act II, we see a happier Jackie who has seemingly made peace with her demons. We keep her company while she waits for her doctor’s phone call and, to pass the time, she relates more stories that reveal her unfortunate knack for attracting difficulty. Among them, why she really lost three children, how she was humiliated by Aristotle Onassis, and what happened the day Jack was shot.

Though it is currently a scattershot journey and the writing doesn’t yet make it clear what the play’s purpose is, Burrows’ performance is worth a trip to the theater. The tall lissome actress invests everything she has into bringing one of the most admired women in America to life.

For a window into her world, before and after Camelot, Jackie Unveiled is a ladies night out at the theatre that will leave you with much to discuss on the ride home.

Jackie Unveiled currently runs through March 18th at The Wallis in Beverly Hills. Go early and enjoy one of their divine specialty cocktails in the airy lobby bar before the show. Tickets and more information: www.thewallis.org