I was once myself a dedicated summer-person-in-residence somewhere between Wainscott and Amagansett every year. And later, I evolved into a reasonably well-behaved houseguest. Till other people’s adored grandchildren multiplied. In recent summers I fade into urban shadow. But early this July, my friend, Dan’s Papers senior editor Stacy Dermont, invited me to Dan’s “Taste of Two Forks.” Stacy’s husband is the organist at Christ Episcopal Church and they live next door. She found that the Reverend Karen Campbell and her husband Graham were willing to put me up in their guest room for the weekend.  Mornings she came by with just-picked raspberries for my cereal.

“I can eat farm to table from my own backyard,” Stacy boasted as she and the Campbells gardened with a fierce calling in their expanding field of dreams. I did my usual. I ate. I already had an unexpected invitation to spend the rest of the week with a grandchild-free friend just settled in East Hampton. When I moved on, I carried a basket with raspberry rhubarb jam and sweet zucchini pickles, harvested and brewed that afternoon by Stacy.

I got off the Jitney from Manhattan Thursday afternoon in Bridgehampton and persuaded Stacy to join me for lunch at my favorite Hampton orientation spot — Bay Burger on the Sag-Bridgehampton Turnpike. With its beef ground daily, home baked buns and sandwiches layered to custom order, its homemade ice cream and jazz jam sessions, Bay Burger would spoil anyone for most fast food. I debated a fishwich versus a burger but I’d never tasted the falafel sandwich, so I did this time. With its crisp fried chickpea fritters, tahini sauce, and lettuce and tomato in a burly wrap, I was reminded of sharing a similarly Falstaffian oblation at L’As du Fallafel in the Marais of Paris with my guy Steven.1742 Sag Harbor Turnpke. 631 899 3915. 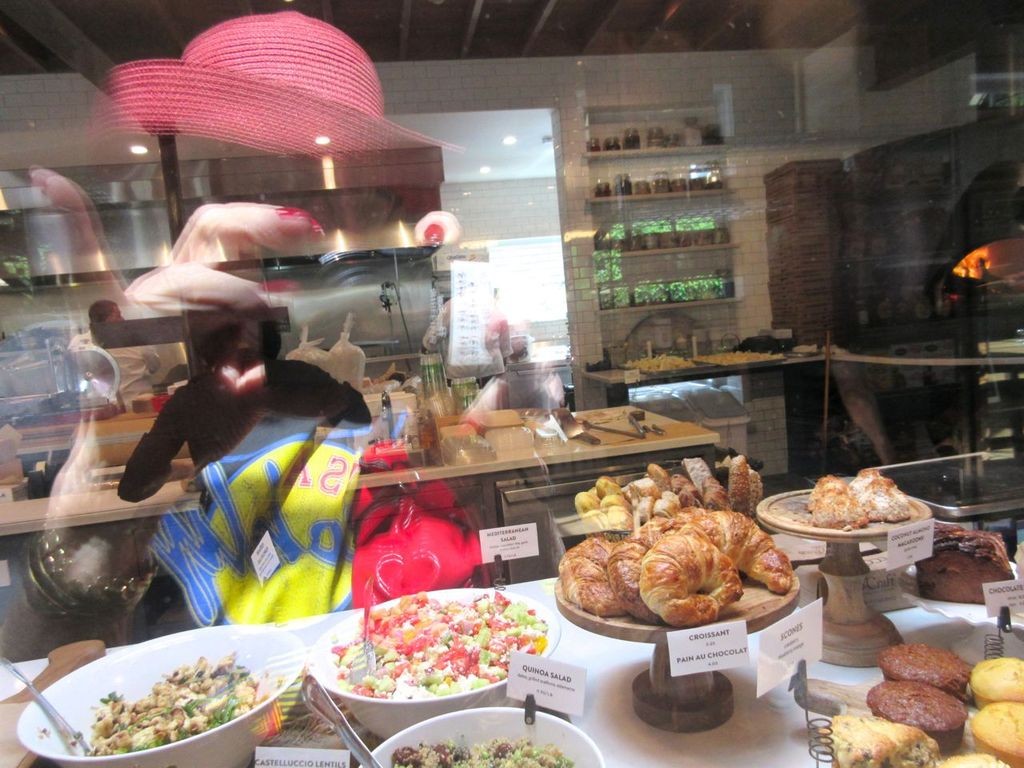 Steven’s idea of lunch was the Italian salumi hero at Espresso Italian Market in Sag Harbor. I would usually have a tuna salad sandwich on too much bread. Sadly Steven is gone so he needn’t discover that is gone too. In its place on the corner of Division and Henry is the good-looking Harbor Market and Kitchen, committed to local, healthy, farm-to-table, the current usuals. There are sandwiches, pastries, fresh juices, and carryout salads, and even dinner-to-go. Stuffed tomatoes. Quinoa salad. Lobster roll. Vegan tomato soup.

Alas, there are not enough places to sit, just a few tables, a scarcity of chairs. A gallant gentleman spied my consternation and pretended to be finished with his lunch. That forced his wife to stand up too. I was able to set up a container of cole slaw and another of Brussels sprouts along with my tuna sandwich. And my friend’s son Bo, who had been wrestling mulch in the garden all morning, could focus on his own personal mulch: a reasonably good vegetarian pizza. 184 Division Street. Sag Harbor 631 725 4433.

***
Sag Harbor I Hardly Know You 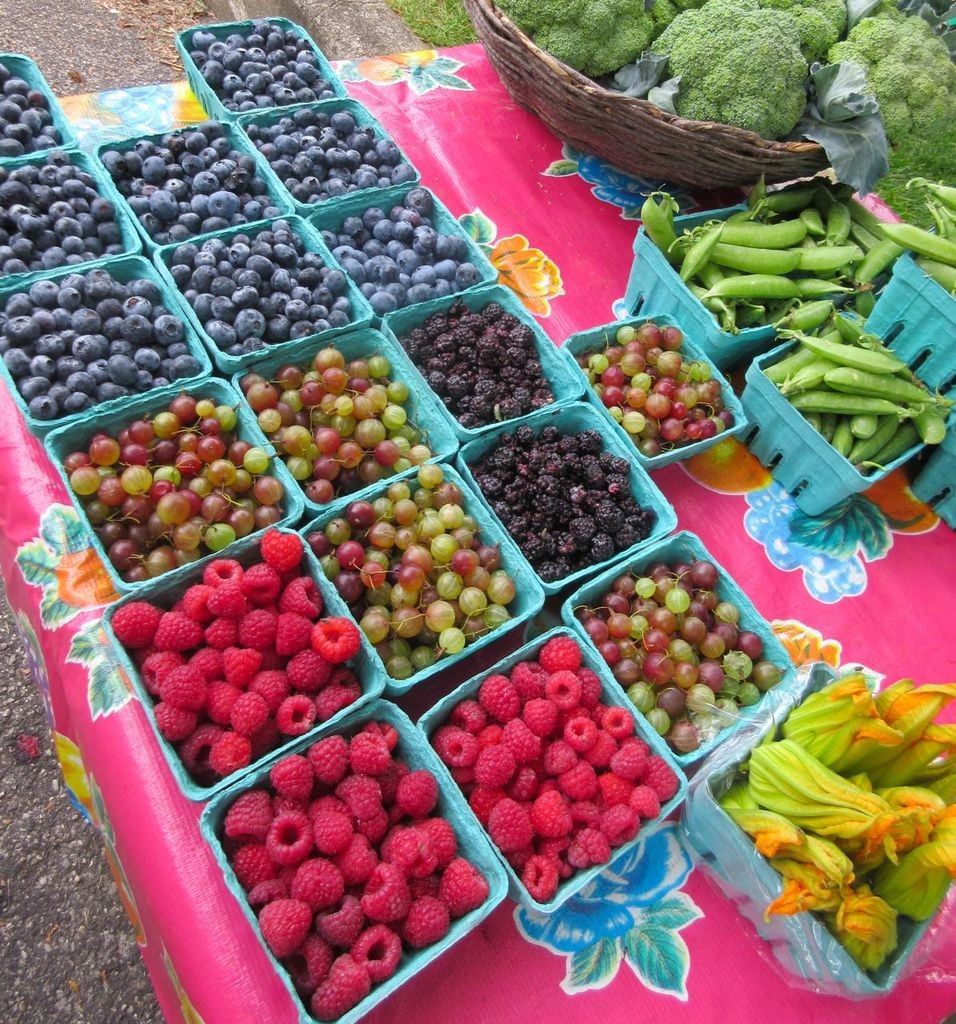 Stacy and I decided to try the new Wolffer Kitchen in Sag Harbor after a 4 o’clock movie in East Hampton. I sat on a wooden bench watching the parade of passersby, while she parked the car. A smart-looking couple in matching Brooks Brothers shirtsleeves peered into the Wolffer window and shrugged. The winery’s trumpeted new seedling was closed. Two men, walking a little girl in a tiara between them, stopped to discuss the mishap. The princess stamped her foot.

“I guess when they told Dan’s Papers they were open seven days a week, they didn’t mean Monday,” my pal said.  “Want to go to the American Hotel?”

“Take me somewhere I’ve never been,” I said.

“Everyone loves Sen,” she offered.

This is not the Sag Harbor we used to know. Well, the dusty old movie theater is still there and the variety store, but the stationery store is gone. Gradually, upscale clothing stores with multiple outlets and eateries are taking over. The Paradise where we used to share a whopping burger before the movie is now Doppio East, with branches in Manhattan, Greenwich, and Huntington. Fertile clans with eager progeny stampede LTBurger. The old Bulova Watch factory has been converted into multi-million dollar condos that are selling fast.

***
To Think That I Saw It on Main Street 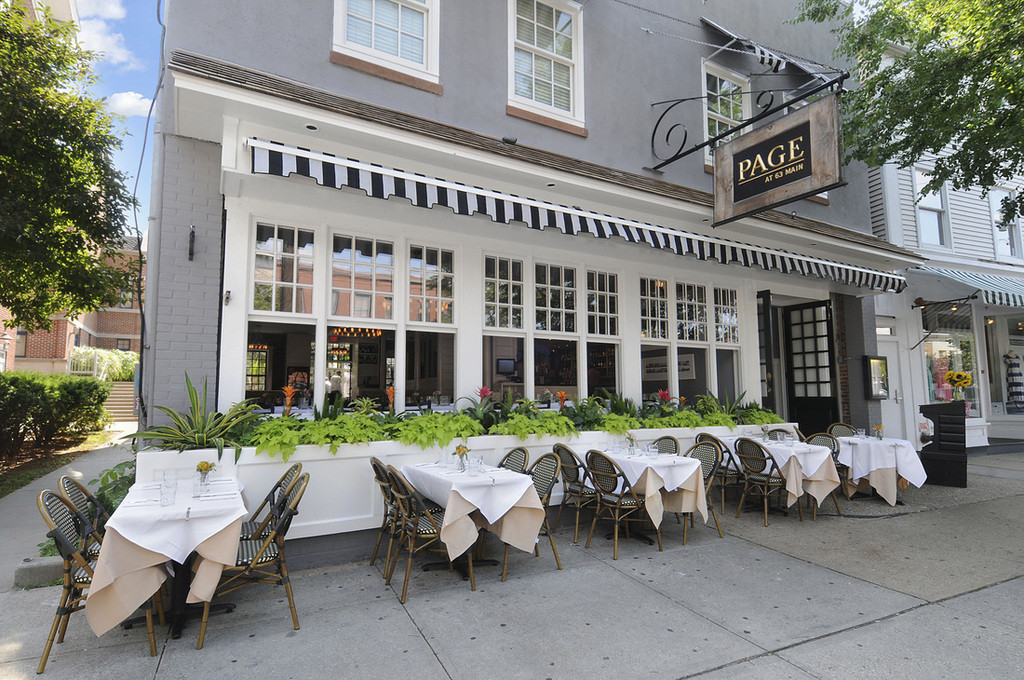 Page with its unique hydroponic garden is at 63 Main Street in one of Sag Harbor’s oldest buildings.

I was drawn to Page at 63 Main Street, with its smart striped awning over crowded sidewalk tables. It was daringly unique, with a hydroponic garden. A statuesque blond hostess in a black evening gown with one leg bare settled us at a corner table overlooking the street. Stacy led me back to the garden room where vines climbed the walls between a trio of fish tanks. It was air conditioned, beautiful, and fully occupied.

“They use the fish doo-doo to fertilize the hydroponic garden,” she confided.

A waiter dropped two big squares of whole wheat focaccia and a little dish of olive oil on every table, then dashed away when we hadn’t decided what to order. We had to flag him down as tables filled in his vast turf.  I couldn’t help but think about fish doo-doo when my corn soup arrived with a scattering of micro greens. It was very cold and lacked a fresh sweet corn intensity. Stacy seemed content with her endive, arugula and golden beet salad but then she is an editor, a diplomat, not a critic.

The crispy calamari with batter sliding off thick sticks of zucchini was not bad, not good, just run of the mill, though a not-very-heated chipotle aioli helped. We each had one half of the heapingly stuffed lobster BLT with avocado and surprisingly good fries. We agreed that excellent bacon almost made up for a certain fatigue of the mashed lobster.

We studied desserts. I always do, but I was annoyed that there was nothing on the sweets list — lemon pot de crème, classic tiramasu, sticky toffee date cake — that you couldn’t have in the dead of winter, except strawberry-rhubarb and black berry sorbets. (I see this too often in the brief weeks of great stone fruits.) 63 Main Street 631 725 1810 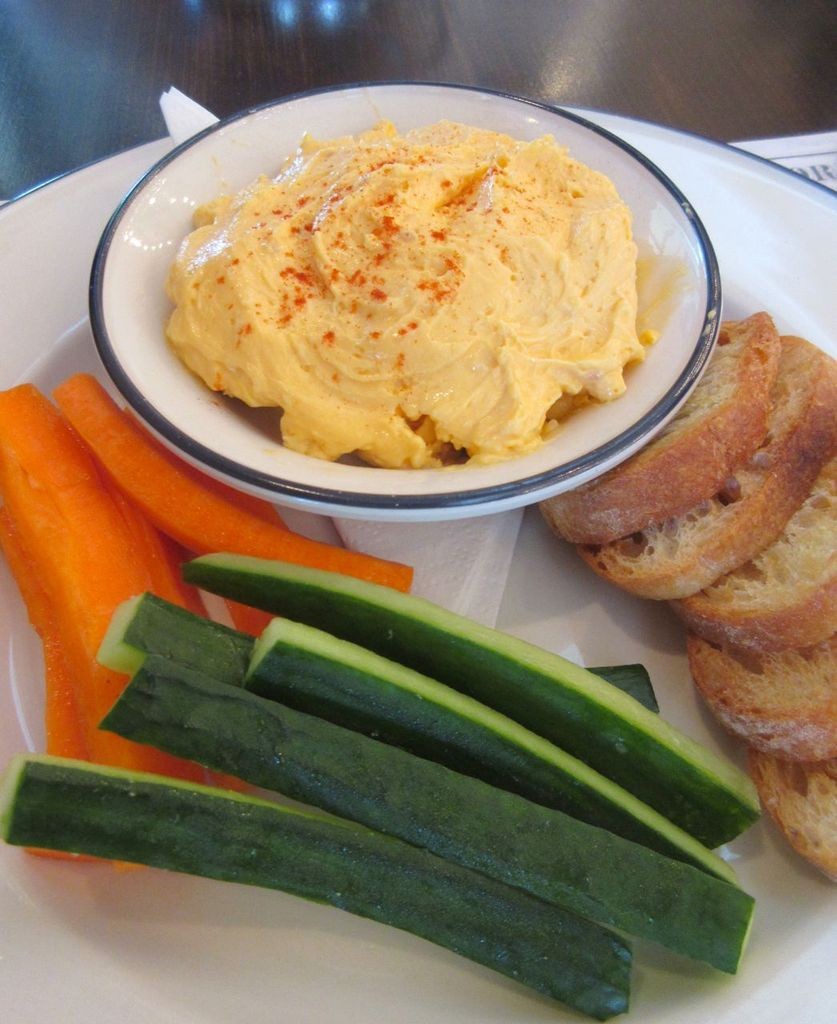 Take one look at this cheese spread with carrots and cucumber strips and decide if it’s for you.

I’m not sure what got into me. Maybe I thought I could revive some innocent childhood joy by ordering the cheese plate — bright orange cheese spread with carrots, cucumber strips and tight little ovals of dried-out bread to dip in it. It was childhood without joy. My friends were not amused. The menu didn’t promise bacon. But a blue cheese iceberg wedge without bacon is deeply disappointing — like the blind date that doesn’t show.

The halibut fishwich was tough and dry, and one spoonful of the watered down Sag Harbor fish stew suggested the chef could not possibly be in the kitchen. Clearly, he’d left the dishwasher to do lunch.  Still, my almost-rare burger with a confetti of bacon cubes planted in gruyere melt on a decent roll was totally respectable. And I couldn’t stop eating the fries. I promised to try again in the evening when a full team would be at the range.

The flags in Sag Harbor were flying at half-mast that night in tribute to Ed Doctorow, who had lived with his wife and family on John Street for many decades. A valet took the car and we rode the elevator upstairs.

It’s a smart-looking dining room, discreetly nautical, although crowded and a little warm when full, as it was Thursday. Looking at the harbor and the sunset might distract from the food but there is no view from the back of the room. 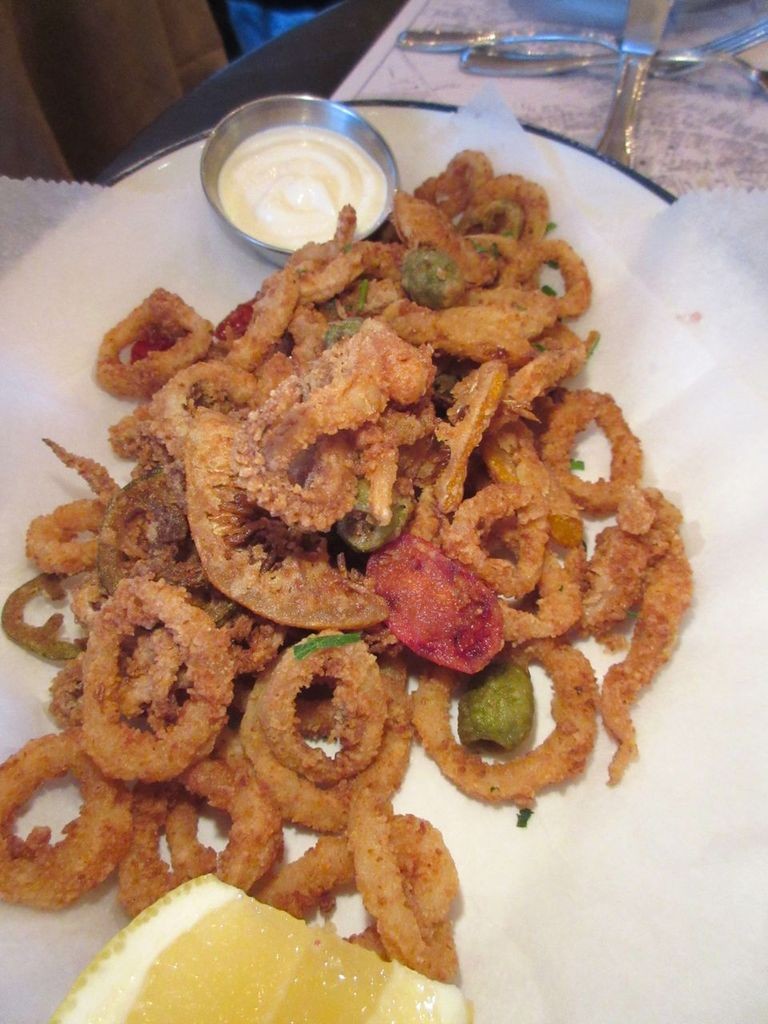 Crispy Point Judith calamari with olives and confit lemon is a better choice than the fried Buffalo oysters.

Granted, the fish stew had more oomph, perceptible, though barely. I’d never had soggy fried oysters  before though their blue-cheese dressing helped frost the Parker House rolls that grew stale as they cooled. I liked the addition of olives, preserved lemon and chiles to the crispy calamari  — it quickly disappeared.

Nothing was truly awful. The rare duck breast on a mound of black cherry quinoa pilaf, the overcooked spice-rubbed sea bass, both were just okay. I didn’t want to share the corn, grilled fennel and pepper toss alongside. I wanted it all for myself, along with the very good coleslaw. The seared Block Island scallops, though more cooked than I prefer, were fine. We didn’t try a steak. Maybe we should have.

We longed to get a check and hit the ice cream shop on the wharf. But then the dessert menu arrived offering berry crisp, a hot fudge sundae and berry pound cake. Yes. Yes. Yes. A taste of summer. But what a disappointment. I would have preferred the berry crisp without granola. There were exactly three blackberries on the toasted wedge of cake. The fudge sundae was sadly sedate, with no fudgey runover in the bottom of the dish. Why did I expect anything more? 31 West Water Street, Sag Harbor. 844 227 6672
***