I liked Saint Joan. A lot. The classic play by George Bernard Shaw is multi-layered, providing for moments of dark humor, poignancy, and even inspiration.

We all know about young Joan, who took on the monarchy and soldiers, based on the voices and visions she heard and saw from God. We know how the church was threatened by her, the tribunal sentencing her to a horrid death, with ultimately, a concession years later by the church, that she did indeed communicate with a higher power.
So much so, that she became canonized. Talk about a turnaround.

I felt this play was oddly timely, given the current passionate conversation about the  patriarchal power base entrenched in society throughout the centuries, now on the verge of being toppled. Sure poor Joan had her believers in some of the powerful men of the time, but they did little to keep her safe.

This production of Saint Joan (the 8th revival, since the original opened on Broadway in 1923) is sharp, swift, funny, sad, engaging and totally kept my attention, thanks to a stellar cast of supporting actors including  Patrick Page (Robert de Baudricourt), John Glover (Archbishop of Rheims), Adam Chanler-Berat (The Dauphin, Charles VII), Daniel Sunjata (Dunois), Jack Davenport (Earl of Warwick), and Walter Bobbie (Bishop of Beauvais, Cauchon).

And then there is Condola Rashad as Saint Joan. Her performance (for which she has received a Tony nomination) is clear, simple, straight-forward and believable. 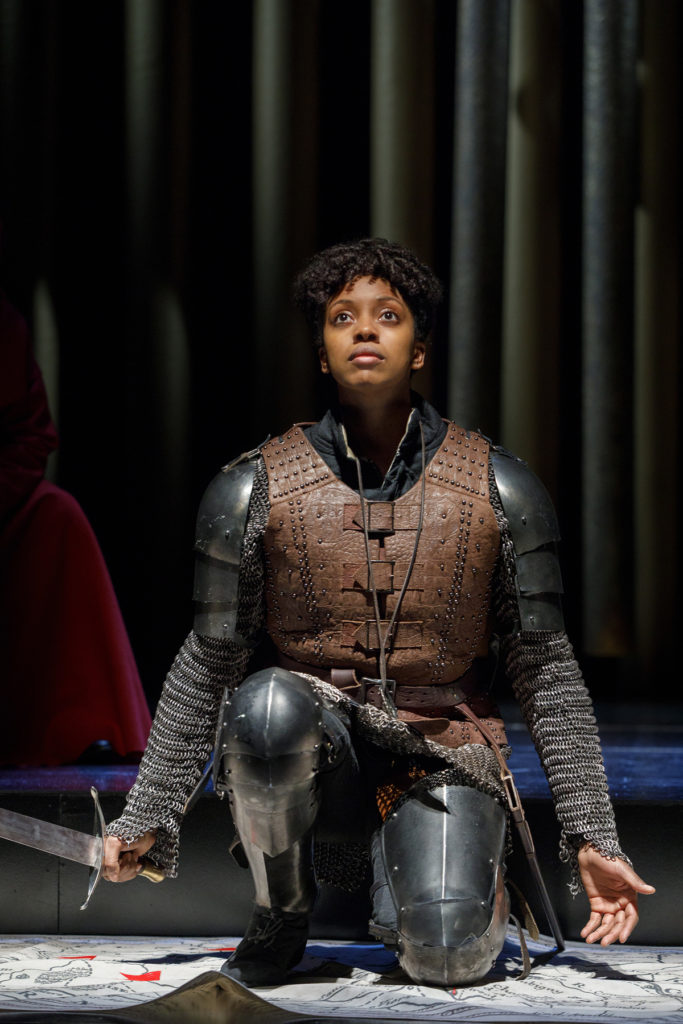 She plays a young girl with the innocence necessary, but with a stalwart strength that comes from an extraordinary figure. I found her totally compelling.

Directed by Daniel Sullivan, with efficient and stunning scenic design by Scott Pask, this Saint Joan is another fine production of the Manhattan Theatre Club organization.