John A. Parks: In New York

With astute observation and a wry wit, the dynamics of New York City’s denizens, streets and landmarks come to life in British artist John A. Park’s new exhibition. It is a joyful celebration of his adopted city.

Parks, who studied at London’s Royal College of Art has been the recipient of both Fulbright and National Endowment for the Arts grants. Since 1979 he has been a faculty member at the School of Visual Arts. Familiar with its streets for decades, he still sees the City through an outsider’s eyes. “ I felt I wanted to try to paint the inhabitants using the city. – to capture both people and place. And to paint people in New York you have to paint a lot of them; it is a place above all of crowds, mobs and throngs. Whether you are food shopping or lining up for a restaurant or teaching a class, you are generally doing it in company of quite a few others.” 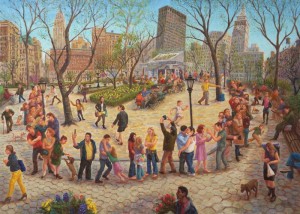 He is particularly taken with the physical and social characteristics of everyday tasks and entertainments. Like the paintings of Brueghel the Elder, he is attuned to the gestures that typify a person’s character or type of life. The absurdly long queue for a hip, fast-food meal in “Shake Shack Line, Madison Square Park” turns a humorous eye on the privations of teeming city life; people making the most of waiting times taking selfies and photographs, catching up with friends or sharing amorous moments. There are discerning vignettes encircling them, people reading on the park benches, an elderly man with a cane uncertainly putting one foot in front of the other, another man in the foreground with an armful of flowers. 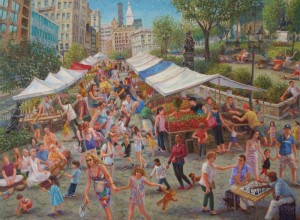 The paint is thick and rich, with short brushstrokes. Colors are often unblended, a pointillist effect bringing out the varying qualities of light. Forms are askew and tilted. All add to the sense of constant movement.

In “Union Square” we have a vision of abundance; flora and food piled up on stands in lusciously brilliant colors, as far as the eye can see. The walkway is benignly shared by shoppers, chess players, and a group of Hari Krishna followers. There is the power and excitement of a dense, bustling, multicultural society. The white awnings create strong diagonal lines that lengthen sight down the entire street. Besides a perspective viewed from above which lets us see more of the surrounding park, we see fragments of figures as they leave the picture plane, extending the space even more. 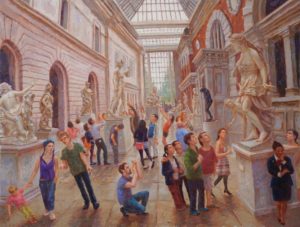 “Metropolitan Museum” affectionately captures a range of reactions to the classical art at a hallowed institution: awed visitors, and excited youths, the impatient child pulling his mother, and the bored Museum guard who has seen it all. But in the soft light coming through hundreds of glazed windows, Parks is also showing us the long human history of many of the gestures themselves, as the poses of the statues are reflected in the more temporary guests. 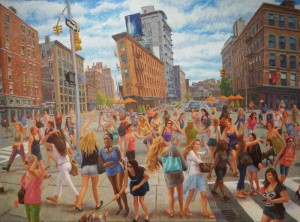 For 50 years Isabel Bishop’s studio overlooked Union Square. From that vantage point she found the primary subject of her paintings, the everyday life of a new breed of women—working girls she would see from her windows and mingle with on the streets. Parks’ homage updates this with studies of their emboldened contemporary counterparts. These girls are more exuberant in their physical movements and freer in modes of dress, they have a fierce confidence about where they are going. Whether hurrying back from lunch or errands, greeting friends or in focused engagement with technology, each woman is intently absorbed in her own world. 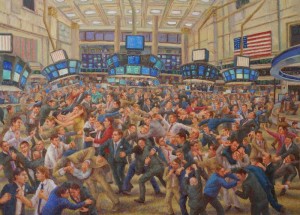 Parks shows sensitivity and respect towards the figures he has chosen to paint, within each crowded composition they are always fully realized individuals. However there is one painting that contains rather more mischief than the others. The crowd scene in “Stock Exchange” seems absolutely chaotic. Greed and aggression have turned the room into an arena of feverish agitation. Perhaps a suspicion of the breakdown and degeneration of those who pull the strings behind the world of finance or showing an artist’s sense of equalitarianism, it has the roguishness of an almost cinematically humorous barroom brawl.

Animated and dazzling, engaged with the spirit and manners of daily life, Parks has created a series of genre painting experienced from the always fascinating spectacle of New York City streets. He has found the life force of the city itself.

JOHN A. PARKS: In New York