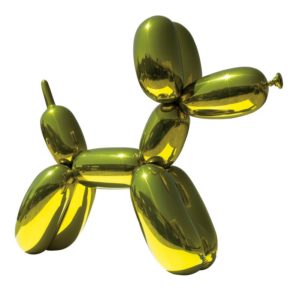 There was no shortage of superlatives at a recent preview of the Whitney’s final exhibit at the Marcel Breuer building on Madison Avenue. “Jeff Koons: A Retrospective,” with its kitschy collection of some 150 works by the artist that so many love to hate (but also to love), ensures that the institution will leave with a bang and carry its mission forward when it re-opens downtown next spring.

Billed as the first comprehensive retrospective in New York of this New Yorker’s oeuvre, the show is the first to occupy the entirety of the Breuer building’s special exhibition galleries—the second through fourth floors, the lobby gallery, and the sculpture court on Madison.

The speakers at the preview were unsparing in their praise of Jeff Koons and the show—“historic”, “iconic”, “landmark”, “the defining artist of our time.” The weeks leading up to the exhibit were rife with stories about the logistical challenges—and the expense—of mounting the artist’s works, some of which are positively gargantuan and one of which (“Gorilla”, made of granite) weighs 15,000 pounds.

For starters, the New York Times reported, the museum’s doors and transom had to be removed for the first time to accommodate “Play Doh” and “Gorilla” (another in a long list of “firsts” that mark this show), and a special team from Otis Elevator had to use chain hoists to lift the elevator with “Gorilla” inside it, because the mammoth sculpture exceeded the elevator’s capacity. And so on.

Why not just wait until the Whitney settles into its new, 200,000-sq.-ft., Renzo Piano-designed digs in the Meatpacking District? Why risk damaging the artworks on the way in? Koons (b. 1955), it seems, has a sentimental attachment to the old Whitney. Born in York, Pennsylvania, he was just 19 when he saw the work of Chicago-based artist Jim Nutt at the museum in 1974, and the experience was nothing short of transformative. He moved to Chicago to attend the School of the Art Institute, where he met Nutt and found his mentor, Ed Paschke.

Thirteen years later, in 1987, Koons returned to the Whitney—not as a bystander, but as an exhibiting artist in the Biennial with “One Ball Total Equilibrium Tank” (1985), “Two Balls 50/50 Tank” (1985) and “Rabbit” (1986). Two years after that, the Biennial showcased more of his work. And he has been featured numerous times since. 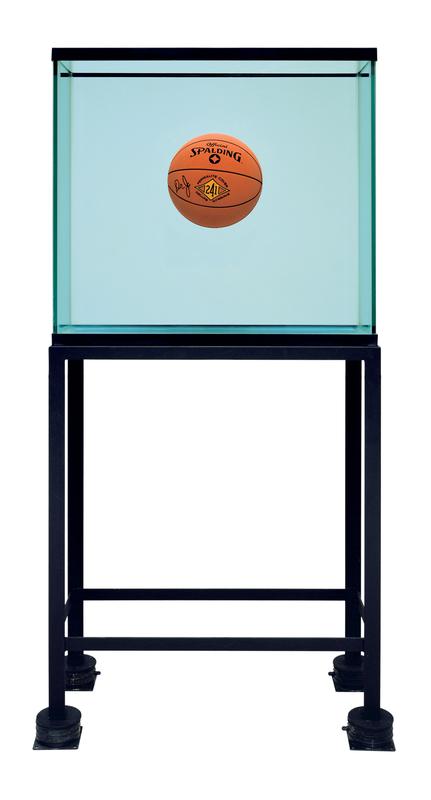 So it is only fitting that Koons would return one more time and pay his final respects to the Breuer building, where it all began. For one thing, he likes the juxtaposition of his shiny, polished figures with the rough stone and concrete surfaces of Whitney uptown.

Koons clearly owes a debt to Marcel Duchamp and the Pop artists of the sixties, Andy Warhol especially. Like his predecessors, he revels in pop cultural artifacts and transforms ordinary objects into extraordinary objects—and objects of reverence. He takes everyday, readymade items—sponges, inflatable flowers, housewares, lawn chairs, a train set, balloons and tchotchkes galore—and re-invents them. He looks back at historical precedents but he also bows to the present and the recent past and gives each figure and object a new gloss, a new meaning and a new audience, while aiming for strict verisimilitude.

His tastes are wide-ranging and quite democratic. He’s interested in Bob Hope and Louis XIV, the Belvedere Torso (famously on view at the Vatican museums and an inspiration to Michelangelo) and Hummel figurines. He remakes the Farnese Hercules—and Popeye (in black granite).

Some of the exuberant works on display, like “Balloon Dog (Yellow)” (1994-2000), “Rabbit” (1986) and “Michael Jackson and Bubbles” (1988), are quite familiar. But some are brand new, like “Play Doh” (1994-2014), a 27-piece showstopper in a room full of showstoppers, making its debut on the fourth floor after a 20-year gestation. Piled 10-feet high and made from spray-painted aluminum, “Play Doh” is part of the “Celebration” series. It’s big, brassy and on steroids, riddled with stretch marks, cracks and crevices to mimic the real thing.

Situated directly across from Koons’s monumental “Balloon Dog,” the hyper-real “Play Doh” pretty much sucks the air out of the room. On a recent afternoon, people were furiously photographing it and taking selfies. Even Koons himself got in on the fun, showing up unannounced on the fourth floor during the media preview and posing for the cameras in front of his giant, Kool-Aid-colored heap.

Yes, I was this close to Jeff Koons. I have the photo to prove it. 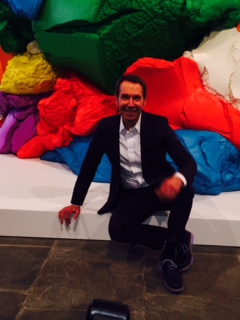