Our next stop as we travel the world are the Scandinavian countries of Denmark, Finland, Iceland, Norway, and Sweden.  Here are some of our Scandinavia in NYC finds. As we start on Park Ave in NYC, you will come across the Scandinavia House at 38th street. 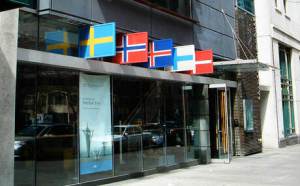 Scandinavia House is the headquarters of the American-Scandinavian Foundation and it’s a combination cultural center, concert venue, restaurant and more. They have a fabulous shop filled with all kinds of wonderful Scandinavian crafts such as blankets, clothing, sweaters, jewelry and children’s toys and books. The center offers diverse exhibitions and film series, as well as concerts and other performances, readings, lectures, symposia, language courses, and children’s activities surrounding Scandinavian culture. The current exhibit features Danish Paintings from the Golden Age to the Modern Breakthrough. Finally, their amazing restaurant Smorgas Chef, is top rated, serving up house-cured gravlaks salmon with mustard sauce and the traditional Scandinavian vanilla waffles. 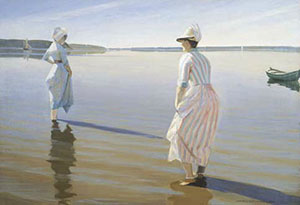 Throughout the 1900’s, Bay Ridge, Brooklyn was a Scandinavian neighborhood. Throughout the 90’s it thrived as the place to go for a great authentic dinner, annual parades and various cultural events. The population has since moved on just as other neighborhoods have shifted and so have the many restaurants and food shops. As the Scandinavian population has spread their wings and moved across Brooklyn and Manhattan, so has their influence on the food we experience today. Many great eats such as smorgasbord (been to Brooklyn’s weekly Smorgasburg yet?), herring, swedish pancakes and all sorts of buttery cookies have made it to our hearts. Many may have had their first taste experience with the iconic Swedish Meatball as the Swedish Superstore IKEA moved into Brooklyn. 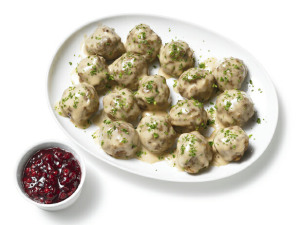 Swedish Meatballs from the Food Network

Just up the street is Aquavit on 55 St and Park which is a fabulous restaurant on my list of “must eats in NYC’. The décor is simple and elegant and the authentic Nordic cuisine is delish. Marcus Samuelsson, an Ethiopian adopted by a Swedish family, made his mark on NYC as their executive chef and became the youngest ever to receive a three-star restaurant review from The New York Times. He started cooking with his Swedish Grandma and then attended culinary school which was followed up by apprenticeships across Austria, Switzerland and NYC. He has since moved on to open his own restaurant in Harlem, The Red Rooster, but more about that in a future posting.

In addition to great Scandinavian restaurants, New York is rich in Scandinavian design. In the 1960’s and 70’s, Swedish design and crafts were all over NYC. Everyone had a Rya rug in the 60s and 70s, a traditional Scandinavian wool rug. Georg Jensen, Dansk, and Marimekko are still around with their classic home furnishing designs but of course IKEA has changed the way many people buy furniture today. 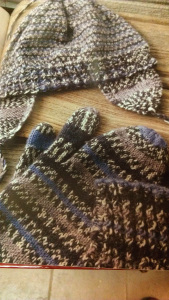 Scandinavian Knitting with a distinctive combination of colors

As you may or may not know I am also an avid knitter and there certainly is a lot of Scandinavian influences in knitting. You can find the influences both in the fabulous yarn and great designs.

I hope you have enjoyed the trip through Scandinavia within NYC! If you want to explore the food some more check out some of these other fabulous Scandinavian restaurants:

Aska: Try one of their 2 tasting menus

Fika: With several locations throughout Manhattan, they feature delicious coffee, pastries and sandwiches

Konditori: Try their great coffee and the “cocoa ball”

Now that your tummies are full I will see you next week somewhere around the world!