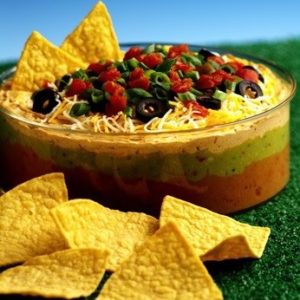 Is it Super Bowl, or Superbowl, one word or two? You can see, I don’t know much about football. However, I do know that the following Tex-Mex dip will be the most eaten dish in the country on Super Bowl Sunday. I was told this several years ago by a Houston food editor who knows about such things. She tried to track down the origins of this recipe, too, but finally came to the conclusion that it is what we call a grass roots recipe. In other words, some home cook somewhere made it up and it just got around. I don’t know. I still think it must have been created by a home economist in a food company’s test kitchen. You know, the mandate was to create recipes with canned refried beans, or with taco seasoning mix, or maybe things to go with corn chips. There are many versions of it that make the rounds, and it goes by various names. It even got into the latest, totally revised edition of the Joy of Cooking. That certainly makes it a classic.

Some people make this entirely with convenience products – canned refried beans, frozen guacamole, canned tomatoes. And some people build the dip in a baking dish so they can put it under the broiler briefly and melt the cheese. I prefer it when at least a couple of the layers are fresh – like the avocado and the tomatoes – and I hate it when it is put under the broiler because the melted cheese cools quickly and becomes far less appealing than unmelted shredded cheese. Do whatever … Obviously, you don’t have to take the proportions too seriously either. Super Bowl watchers don’t notice anything but the game anyway.

Spread the refried beans on the bottom of a glass serving dish (so you can see the layers) or a deep platter.

Peel and pit the avocados, then, with a table fork, in a mixing bowl, mash them with the lime or lemon juice into a slightly coarse paste. Spread the paste over the beans.

Mix the sour cream with the taco seasoning and spread it over the avocado.

Distribute the chiles over the sour cream, then the olives, then the tomatoes.

Make a top layer of cheese, then sprinkle with the scallions and cilantro.

Serve with corn chips for dipping.