Do you have a question about sex, love, or romance? Dr. Ruth’s got the answers.

Q. My husband and I would love to introduce some sex toys into our sex life, but we’re not sure where to begin.  We’ve looked at toys online, but we don’t even know how to use some of them!   We’re both in our early 40s, but new to sex toys. What do you suggest we start with?

Dr. Ruth.  What if you came from some far off land where there wasn’t any ice cream and you asked me which flavor to try? My answer would be to try as many as possible and see which ones became your favorites. My answer to your question is the same. And don’t worry about knowing how to use a sex toy. Learning is part of the fun. My only serious advice here is that if one partner decides at some point that he or she doesn’t like a particular sex toy, it gets tossed out of the bedroom. Sex toys are for mutual pleasure so if there are some that don’t fit that description, they don’t belong in your toy chest. But other than that, use them as directed or make up your own uses for them. As long as they bring you extra pleasure, then great. There are no sex toy police so the only thing that matters is that you both find their use pleasurable

Is my vagina blocked?

Q. I’ve been a widow for the past 3 years and just began a relationship with a wonderful man. I’m 57 and he’s 60. The first time we had sex it hurt. I was very much aroused and wet. He was only able to go so far in me but it seemed like there was a barrier that couldn’t be broken! The second time was a little better but the barrier was still there. Is this normal? Does the saying “practice makes perfect” mean just that in my case? Do you have any solutions?

Dr. Ruth.  First of all, you might have thought you were as lubricated as in the past, but weren’t, at least not sufficiently so to allow for penetration. So the first thing you should do is get some lubricant and see if that does the trick.

If it doesn’t, then the problem may be that you are a bit nervous about having sex, or maybe guilty because you still feel loyal to your deceased husband, and so are unconsciously tightening your vaginal muscles. But since the lubricant might help with that also, try using a lubricant and see what happens. If you’re still having difficulties after a week or so of trying with the lubricant, then you should make an appointment to see a sex therapist.

Why Doesn’t He Want to Have Intercourse?

Q. I am dating a wonderful man who is 20+ years my senior. I am a 49-year-old woman. We have been dating for 3 years. In the beginning, there was a great interest in the physical relationship. Now he does not have intercourse with me. There are no physical problems on his end. I have mentioned it to him, but he said he has a lot of stress. He sold his business and made a great deal of money so i would think the stress has diminished. What could it be?

Dr. Ruth. Stress takes many forms. Maybe the fact that he doesn’t have a business could be making him feel like he’s not useful any more, that his life is pretty much over and that could be very stressful. Or maybe he’s worried about his former employees. Or maybe the stress has nothing to do with his business and he’s noticed that he has developed some erectile difficulty and is trying to hide it by not having sex with you. 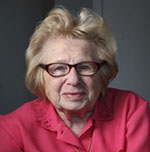 Dr. Ruth Westheimer is a psychosexual therapist who pioneered speaking frankly about sexual matters on radio with her program, Sexually Speaking. It began in September of 1980 as a fifteen minute, taped show that aired Sundays after midnight on WYNY-FM (NBC) in New York. One year later it became a live, one-hour show airing at 10 PM on which Dr. Ruth, as she became known, answered call-in questions from listeners. Soon it became part of a communications network to distribute Dr. Westheimer's expertise which has included television, books, newspapers, games, home video, computer software and her own website, www.drruth.com