Eggs and ducks and peeps oh my! Easter and April Fools – well as they say, something for everyone this weekend, check it out below. Did you ever think you would see the words lipstick and fried chicken together – me neither, but you can experience this in the mission. Two creative tomatoes launched a new company this month focusing on mentoring women re-entering the work force as well as mentoring teenage gals. We want to keep Tomatoes growing. And my fav funny gal has been spotted in Napa…new movie coming –  Hooray! 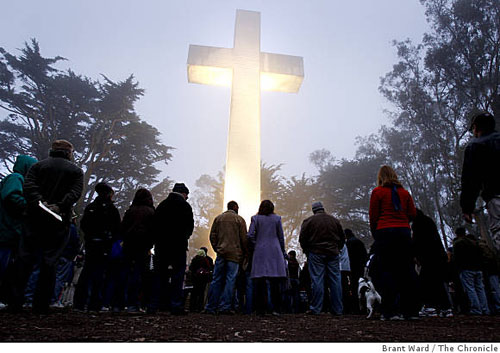 For those who celebrate the glory of Easter, you might want to set your alarm super early and head to Mt. Davidson for the 96th annual Easter Sunrise Service at 7 a.m. on Sunday. Thousands of locals and visitors gather at the cross for a lovely non-denominational service at the highest point in San Francisco. 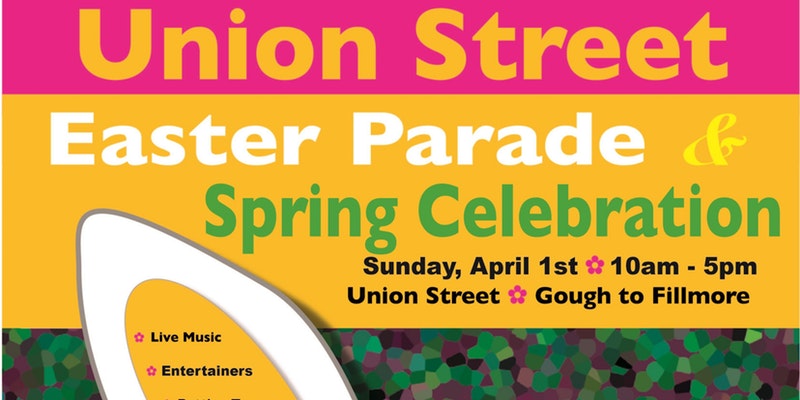 If you lean more toward Easter Bonnets and a parade, the Union Street Spring Celebration and Easter Parade will make you smile, especially some of the not so elegant bonnets that adorn our colorful residents. The parade begins at 2 p.m. on Union Street between Gough and Filmore in the Marina. 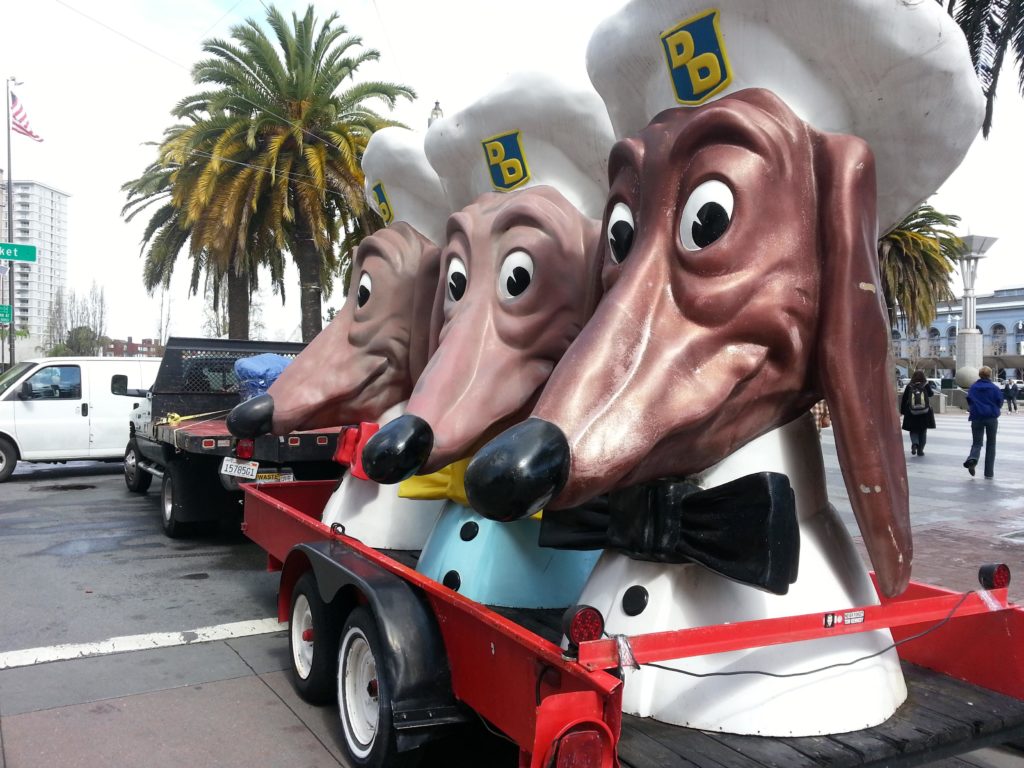 AND then there is the 40th annual St. Stupid’s Day Parade from 1 – 3 on Sunday beginning at the Transamerica Pyramid. Starting at noon the colorful crowd will dance, hop and skip up Columbus Ave to Joe DiMaggio Playground, for the traditional talent show, and unavoidable rituals by the first church of the last laugh. There is a sock exchange, in case you have solo socks lying around, you can trade with a fellow parade goer. Then you bring pennies for the blessing of the banker’s heart and the day ends with a two and half minute talent show. Apparently, viewers are not only entertained and delighted, but they are also perplexed. Sounds like a hilarious way to ring in April. Free and fun for all ages. 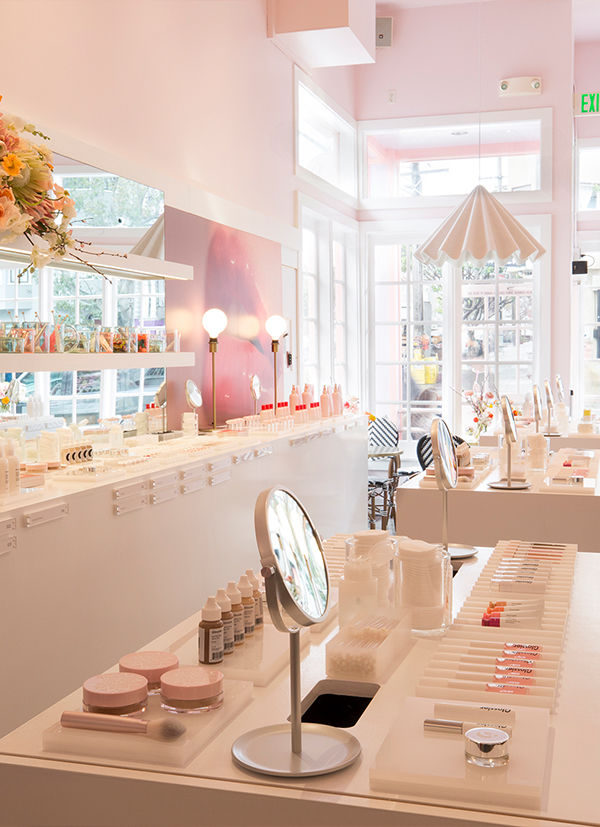 Tomatoes, I ask you, who would of thought it, thunk it, or even dreamt it—but ladies, yes, it’s here. Glossier and Rhea’s Cafe in the Mission have teamed together to bring the world of beauty and food into one realm. In 1991, James Choi’s (The now owner of Rhea’s) father bought Rhea’s—a tiny market and liquor store named after the original owner—at 19th St. and Valencia. 25 years later, James decided to take over the corner store and start a sandwich shop inside it.

The cafe has seen new hype with its homage to pop-culture and its ways of keeping up with current and relevant trends. Enter Glossier, and in collaboration with Rhea’s they launched a visual redesign with an enticing color palette that seamlessly celebrates both beauty and food. They have a curated limited menu, including their famous buttermilk fried chicken served with a side of lip gloss? Well, it’s worth a visit I say. Who doesn’t need another lipstick? Hurry in before it goes away. Get the details. 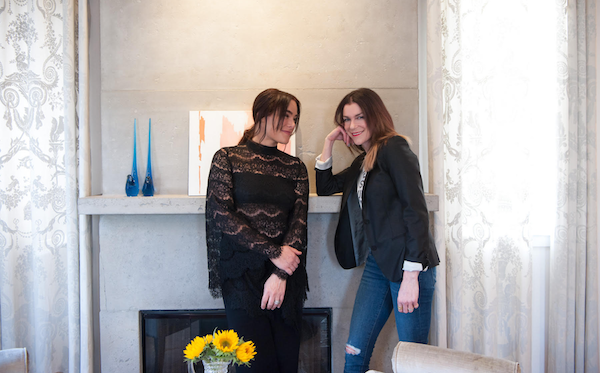 I recently stumbled upon a very cool creative duo, Adrienne Arieff and Lauri Levenfeld . They have joined forces to launch Project Mentor  as a way to help women grow professionally and become leaders by connecting them with mentors. The program is focusing specifically on ladies in creative fields, an area particularly lacking female leadership.

Arieff and Levenfeld both have a history of supporting other women: Arieff, with a background in communications, is author of the young women’s guidebook Fairytale Success: A Guide to Entrepreneurial Magic; Levenfeld, a photographer founded The Project for Women, which connects girls and women through content and photography. They bonded over their fundamental belief that mentorship is one of the best ways to support the next generation of female leaders and the fact that it’s often really difficult for women who are just entering a field or are in the process of re-entering the workplace, after having kids or otherwise. They offer free programs and will soon offer free and paid workshops, talks with industry leaders and networking events. 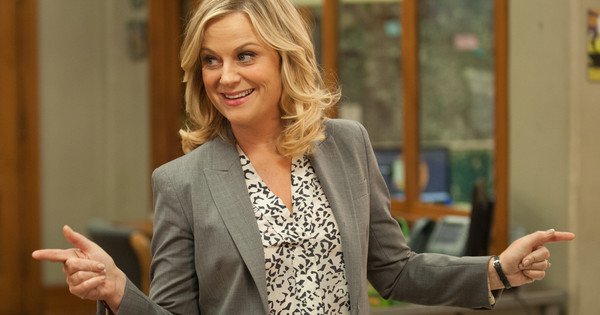 Oh my pals, one of my favorite tomatoes has been spotted around town – well Napa town that is. Amy Poehler is about to direct her first feature film, Wine Country, which will take place in — you guessed it — Napa Valley. Poehler will star in this Netflix movie, which starts filming soon with some of the actress and director’s closest comedienne pals.

The premise is a tale as old as time: A crew of female friends flock to the country’s most famous wine region for a wine-soaked 50th birthday party. This is a true tomato tale for a great gal pal night out. As always happens, the group will ride around the valley, visiting wineries and stirring up hilarious trouble. All our fav funny gals will be featured! Stay tuned.