Summer is not over yet, so bring a wrap and head to one of our local parks for the latest version of a drive-in movie. Instead of a quick lunch on the go head to the Rotunda in City Hall at noon for an ongoing series of free dance performances. Two women create amazing works of art from solid color vinyl, creating art using drug store tape – intriguing. If it’s been a while since you visited the Cal Academy of Science, try their Thursday night events, a unique way to head into the weekend.

Film Night in The Park 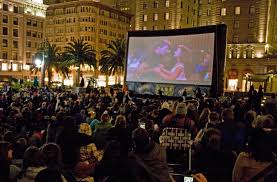 BYOP – Bring your own popcorn to SF’s version of a drive-in.  Giant outdoor screens along with picnics and blankets make up The San Francisco outdoor film series presented in 3 local parks. Presented by The San Francisco Neighborhood Theatre Foundation and various underwriters, on August 27th in Washington Square Park you can sit back and enjoy “Lost in Translation.” Pack a picnic, take public transportation or uber, (the easiest way to ensure you get there on time!) and grab a seat on the ground.

Chairs are discouraged, so maybe bring several blankets for padding and comfort! One of my favorite films of all time, “The Devil Wears Prada” is up on September 10th at Union Square and Star Wars Fans will feel they are in the movie “The Force Awakens” as they lounge under the stars on September 24th at Dolores Park. All shows begin at dusk. Get the scoop. 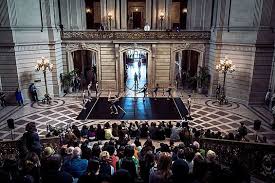 This dance series is in its 6th year and I am so happy to have discovered it. Free once a month dance performances set the rotunda at City Hall on fire with glimpses into movement and musical traditions from around the world. On September 2nd at noon, the all-female dance company Mix’d Ingrdnts performs In Between the Seams, which aims to push boundaries and broaden understanding of the importance of human connection.

This all female dance company makes a powerful statement in each of their performances The Company is multi-ethnic and is comprised of women of all ages (hello tomatoes!). The company exists to empower women to express themselves and help others speak up for the greater good. Get the details. 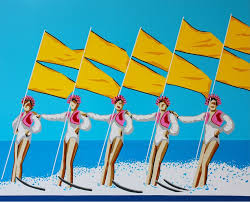 I know it sounds like “record” art, since those of us who are tomatoes think of vinyl as record albums. However the type of vinyl art that artist duo t.w.five creates employs colorful vinyl tape – you know the kind you can get at Ace Hardware!  Vibrant works arise when Pernilla Andersson a painter originally from Sweden, joins forces with Paul Perreira a Brazilian photographer. Both artists have “day jobs” and meet after work to create these large-scale installations.

I don’t have nearly enough space to go into detail about these amazing women and their creative talents. However, each work of art is created with hand-cut vinyl tape and applied to images that they project onto an all-white panel. Nothing is drawn or painted. Every image is made only with adhesive tape. You can view two of their series, “landscape” and “Polaroid” at the new State Gallery in the Mission this month. Then they take residence at the De Young in September – October where you can learn how to create your own cut vinyl pieces. I encourage you to seek them out! State Gallery – 1295 Alabama Street. Get more information on the duo. 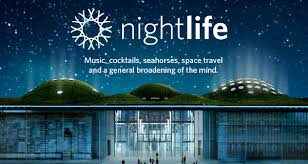 Relatively new to our favorite science museum is NightLife. Each Thursday night you can find a new way to explore the museum. On September 1st, Fermented NightLife is the feature. Experts will break down the science of fermentation (for those of us who were liberal arts majors)! We know fermented foods are good for us, now learn why and how.

You will learn the science of fermentation of beer and cheese and everything in between. Events begin at 6 p.m. and you get the opportunity to explore other exhibits without the usual crowds. From 6 – 7: 45 you can visit a lush, four-story rainforest and from 6 – 10 discover the Twilight Zone where you can marvel at rarely seen fish and learn about Academy scientists who travel to mysterious underwater depths. Food and drink for purchase as well so make a night of it. And here I thought the Academy was only for field trips! Get more info.