Famous Tomato Mariska Hargitay, you know Lieutenant Olivia Benson from Law & Order, comes to City arts and Lectures next month to share her story and give us a peek into her new documentary. Most Tomatoes know someone who has Alzheimer’s and The Other Place, is a riveting portrayal of a neurologist tomato battling the disease. Love to try new restaurants, well here is your chance to sample many delicious bites in one place as Eat, Drink SF returns to Fort Mason. And, if you are looking for a new place to shop, wander and munch then head to the latest revitalized area in the Mission.

Tomatoes, I’m sure we can all relate to this theatrical piece, The Other Place, about a successful female neurologist battling the onset of Alzheimer’s. Most likely we all know someone who has or is related to a family member who suffers from this disease. This poignant portrayal will move you. The play revolves around a brilliant scientist, a biophysicist studying the causes of dementia. And one day, mid-Power Point, she can’t recall what she is supposed to say when the next slide comes up. Eventually she learns that the disease she is studying is now the disease she has.

Powerfully portrayed by Stacy Ross we watch as her character Julian’s life seems to be coming unhinged piece by piece. The play examines the very definition of reality as Juliana’s truth boils to the surface. Now through August 13 at Live Oak Theater 1301 Shattuck Avenue in Berkeley. Get tickets.

Of course, all of you Tomatoes are ultra-hip to what’s happening in the Mission District, right?  Well just in case …did you know that in addition to being the creative hub of the city, this neighborhood hosts the city’s largest collection of shops and studios showcasing handcrafted works?  Instead of heading to Union Street for your shopping with or without out of town guests, I highly suggest heading to the Mission. Delicious food and creative arts abound.

A few fabulous finds are Gracias Madre – an absolutely delicious vegan restaurant – and you would never know that the dishes were meatless or served with cashew crema!  For home goods, Acacia holds the key to Japanese and Scandinavian style – both clean and minimalist. www.acaciasf.com.  If you need a little restlet, head to a parklet. What began as a clever experiment to convert metered parking spaces into small-scale models of creative design, has blossomed all over the city.

The Mission hosts the city’s largest assortment of outdoor art and resting spots. The newest is in front of one of my fav tea/snack spots Samovar. www.samovartea.com. After exploring all day, heading to Farmhouse Kitchen might be the key to help you unwind. Check out their Kickboxing bowl, a rice-wine spiked punch. (Gluten free – but sure packs a punch!) www.farmhousesf.com

Are you ready to eat your way through the best restaurants that our city has to offer? Here it is, the annual Eat Drink SF celebration. The premier annual food, wine, and spirits festival for the city was founded in 2009 to celebrate the Bay Area’s world-class restaurant community. Held over four days, tastings, demonstrations, and signature events such as Taco Knockdown and Grand Tasting sessions allow chefs to connect directly with more than 8,500 food lovers. Tomatoes are you ready? Sommeliers, brewers, and top mixologists are on-hand as well to complement delicious dishes and satisfy taste buds.

The fun and irreverent Taco Knockdown kicks off the festival on August 24th with more than 15 restaurants competing with their interpretation of “fold-able food that pays homage to the legacy of the taco” rules. Guests get to try every taco and vote for the People’s Choice Winner, with a panel of experts selecting their own. Knockdown is held at The Pearl  – 601 19th Street, All of the other Grand Tastings will be consumed at Fort Mason’s Festival Pavilion Friday through Sunday August 25 – 27th. For tickets: eatdrink-sf.com 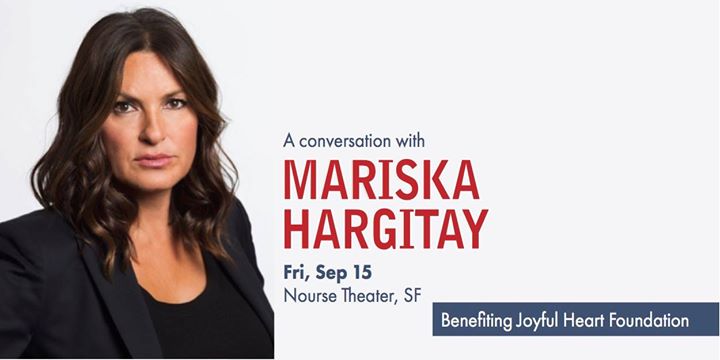 Even if you have only seen re-runs of Law & Order SVU, most of us know the beautiful and talented tomato Mariska Hargitay. She has been on the show since 1999!  How many of us can say we have been in one job that long! Fun fact, she has also appeared in numerous music videos including Taylor Swift’s video for her single “Bad Blood”.  Of course, this lovely woman gives back to the community and in ’04 she started the foundation Joyful Heart, which supports survivors of sexual assault, domestic violence and child abuse.

Most recently, Hargitay produced the HBO documentary I am Evidence, which investigates the national crisis of untested rape kits, an issue that Hargitay has been interested in through her Law & Order role, for which she trained as a rape crisis counselor. The event at the Nourse Theatre on September 15th is a benefit for the Joyful Heart Foundation. Get ticket info.

Tags: SF Lifethings to do in SF