Singing the Blues in BLUES IN THE NIGHT 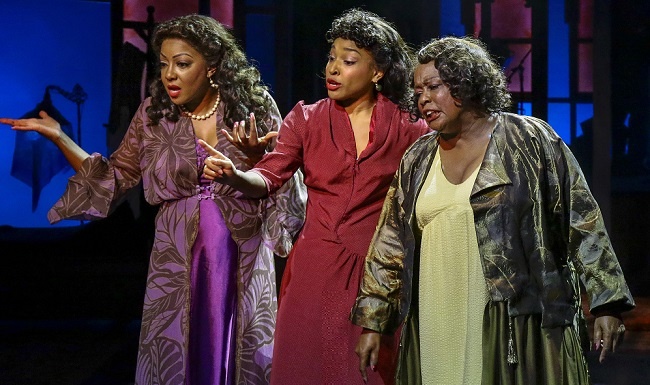 Somewhere in a cheap hotel in Chicago, circa late 1930s, three women are singing the blues. Two have been around the block and seen it all. One is woefully wise beyond her years. All have been burned by the flames of desire and lovers who have done them wrong.

This is the set-up for Blues in the Night, a musical revue conceived and directed by Sheldon Epps, playing through May 20th at The Wallis. Epps first directed it in 1980 at Playhouse 46 in New York where it was intended to be a late-night companion piece to a jazz play the theatre was producing. A brief run on Broadway followed in 1982, which scored it a Tony nomination for Best Musical.

Gregory Hines originally assisted with the choreography and, for the L.A. production, it is Jeffrey Polk who adds his unique flair to Epps’ sleek staging. It isn’t a dancy show but the two have found a simple yet extremely effective way of physically communicating humor and innuendo. With no dialogue or plot to speak of, the show rests on the singers’ ability to sell a song. Lord know the blues ain’t easy. You need life experience and a voice that can deliver a universe of pain, passion, and pride in a single note. If you don’t feel it, you can’t sing it, and these three leading ladies have got the goods.

Each embodies a particular type. Yvette Cason is the aging Lady from the Road, a performer living on memories stashed in her steamer trunk along with old show costumes. She’s loaded with personality and is as adept at comedy (“Take Me For A Buggy Ride” and “Kitchen Man” will have you shaking your head) as she is in bringing out the sorrow in a song like Bessie Smith’s devastating “Wasted Life Blues.”

Paulette Ivory’s stylish Woman of the World is a looker whose appetite for romance and liquor has left her constantly disappointed. She has a luscious, creamy voice, and she can bend a note and pull it back from the air like the sound is bridging worlds. Her “Lush Life” is a rich dish served elegantly steamy and “Nobody Knows You When You’re Down And Out” is a vulnerable acknowledgment of the illusory life she’s created that could be a whole musical by itself.

Bryce Charles is the sweet, sad-eyed Girl with the Date, too young to already be so misused by love. She’s two parts sunshine, one part baby doll, with a sparkling voice that is delicate one moment and sassy the next. She’s young but her career will be one to watch.

When the three of them sing in harmony, it is divine. And, while they may be singing the blues, there is as much joy, fun, and fortitude in Blues in the Night as there is suffering. It’s a decadently rich musical experience built on some of the best early jazz and blues standards you’ll ever hear. Guaranteed to satisfy a lover of great songs, in my book, it’s two hours of musical heaven.

Blues in the Night runs through May 27, 2018 at the Wallis Annenberg Center for the Performing Arts, 9390 N. Santa Monica Blvd, Beverly Hills, CA, 90210. Tickets: www.thewallis.org