What is this Café Altro Paradiso?  “Why are we here?” my companions at dinner ask. My friends, the Goldwins, are mellow. They’ve each sipped a shot of Ketel One on a large rock. Now, she’s furling her bright scarlet carpaccio onto a fork, amused to uncover the fried potato crisps underneath. He is offering me a slice of his salami and a chunk of Parmesan. 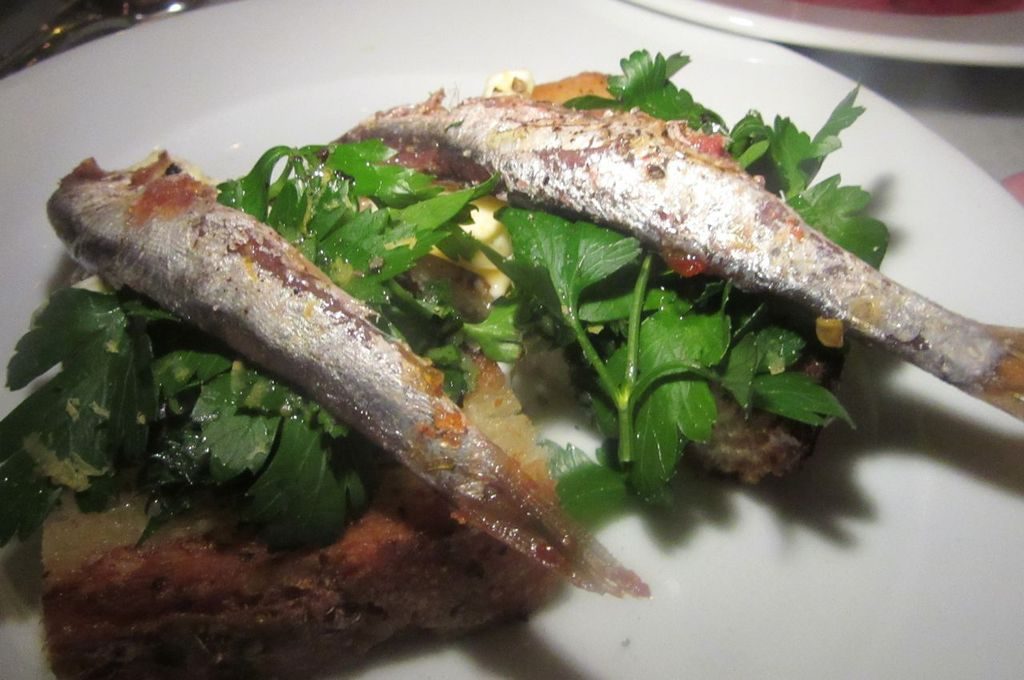 A pair of fresh anchovies is set like jewels with Italian parsley on buttered bruschetta.

My pal Barry’s duo of anchovies with spicy crumbs on thickly buttered toast is remarkably photogenic. The spindly critters nest on bright green sprigs of Italian parsley. The butter is a bit aggressive. I take an inch of the fish so I can observe how good it is. Or not. Yes, it’s good. I’m certainly relieved the menu is mostly not bizarre or challenging. 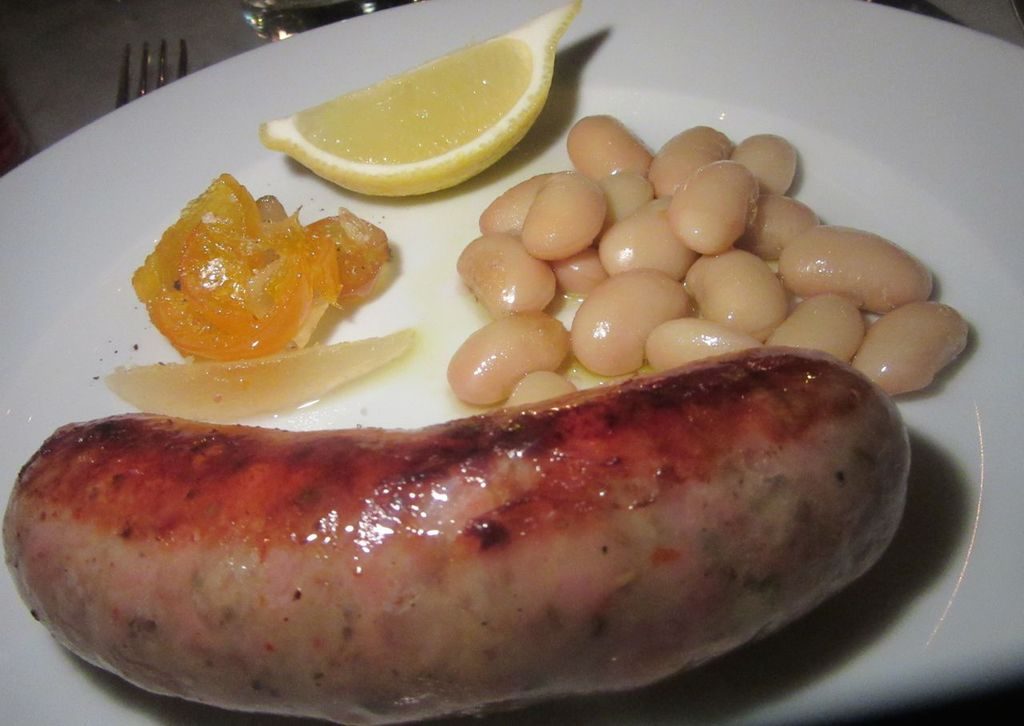 We choose four starters. Mine is a fat sausage with mostarda di Cremona and butter beans.

I can’t fault the big fat sausage, with its hill of butter beans and mustard, that I am chewing then passing the plate along to Polly, but is there anything to write home about? It’s a sausage. It’s a delicious sausage. I’d take another bite if I wasn’t intent on tasting the carpaccio…but it’s just a sausage. 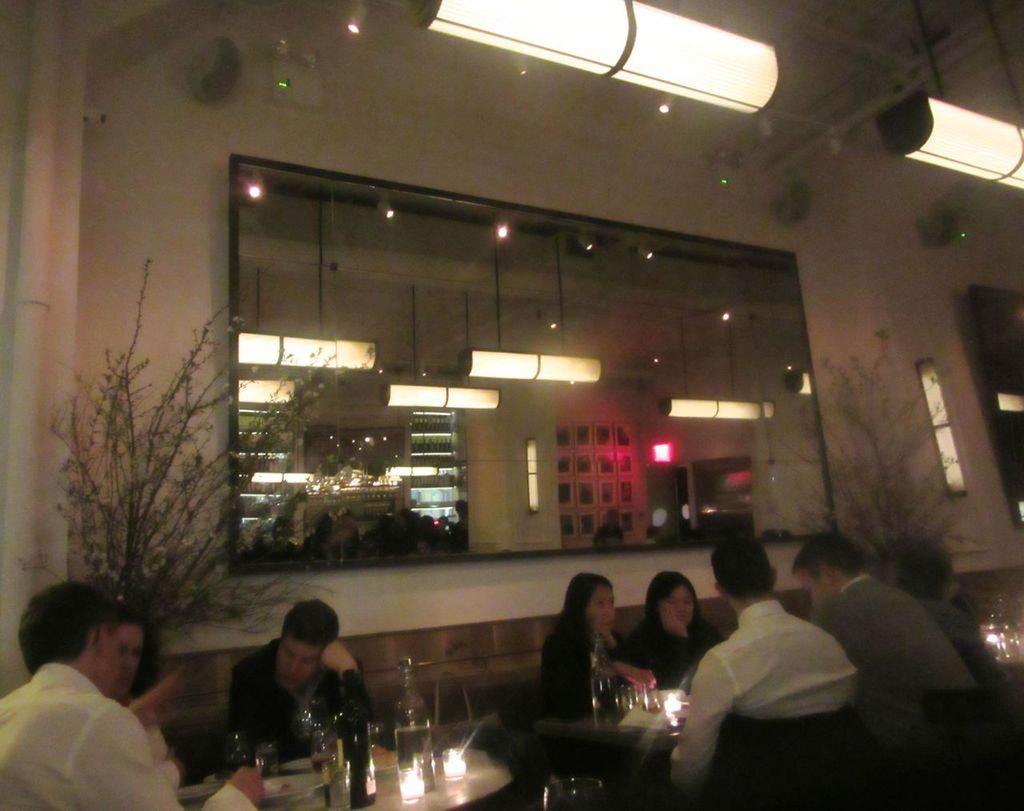 The room gets dark after sunset and smart fixtures and tilted mirrors add some drama.

Café Altro Paradiso is hot. It was already hard to get a primetime reservation before Eater posted it on the NYC Heat Map. I should explain for my few less-than-hip readers that the blaze ignited quickly because it’s the new Italian restaurant from Ignacio Mattos and Thomas Carter, the team behind the small and popular Estela on Houston Street.

I never made any effort to explore the reported weirdness of Mattos’ food at Isa in Williamsburg. And nothing I read about Estela encouraged my curiosity — not landing at number 90 on the “50 Best Restaurants” list (actually the 50 Best comes with the Next 50 Best attached). I wasn’t tempted even after the Obamas dropped by for dinner. But all that has surely fed the fever at Café Altro Paradiso. I try to reserve anonymously, of course, but I reject the only option. I’m not interested in dinner at 5:30 pm.

A friend reports with obvious triumph that he has secured a table for 4 at 7:30 in ten days. Would I like to join him and friends? The day before our date, he is devastated to fall victim to the flu. But he’s not insulted at all, when I ask him not to cancel the table. “I’ll find a fourth and join your friends.” This no-primetime-table contagion is serious.

My taxi drops me in the middle of the block on Spring. Paradiso is nowhere to be seen. I ask a couple of young women idling in a doorway if they’ve ever heard of Altro Paradiso.  Go to the end of the block and turn right, they instruct. Well, at least it isn’t snowing. The fact that the entrance to 234 Spring Street is not on Spring Street will surely only add to the mystique of the place for some. 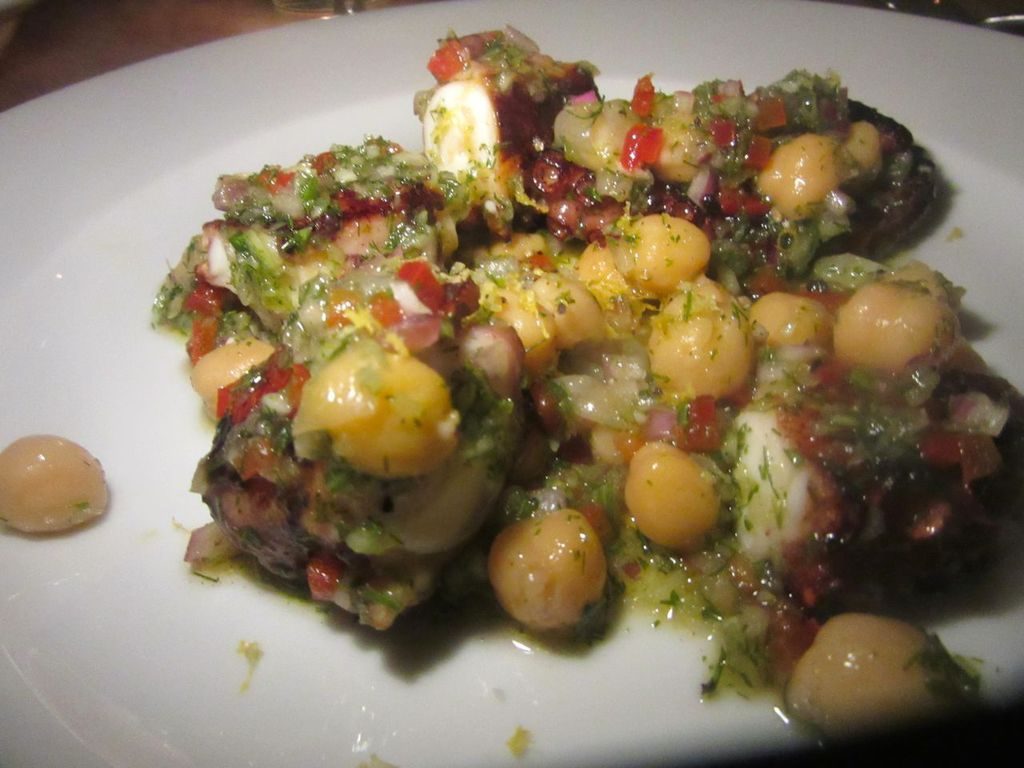 Are you old enough to remember when octopus was not found on almost every menu in town?

I am already grumpy, but the friendly welcome at the hostess stand makes my pout less defensible, especially when they offer to seat me at once even though I am the first to arrive. The table set aside for us is small and intimate, perfect for a romantic twosome. “I don’t think our four will fit here,” I say. “We don’t all even know each other.” She doesn’t stamp her foot or roll her eyes, as one might expect. She leads me to another table, perfectly reasonable for a foursome. 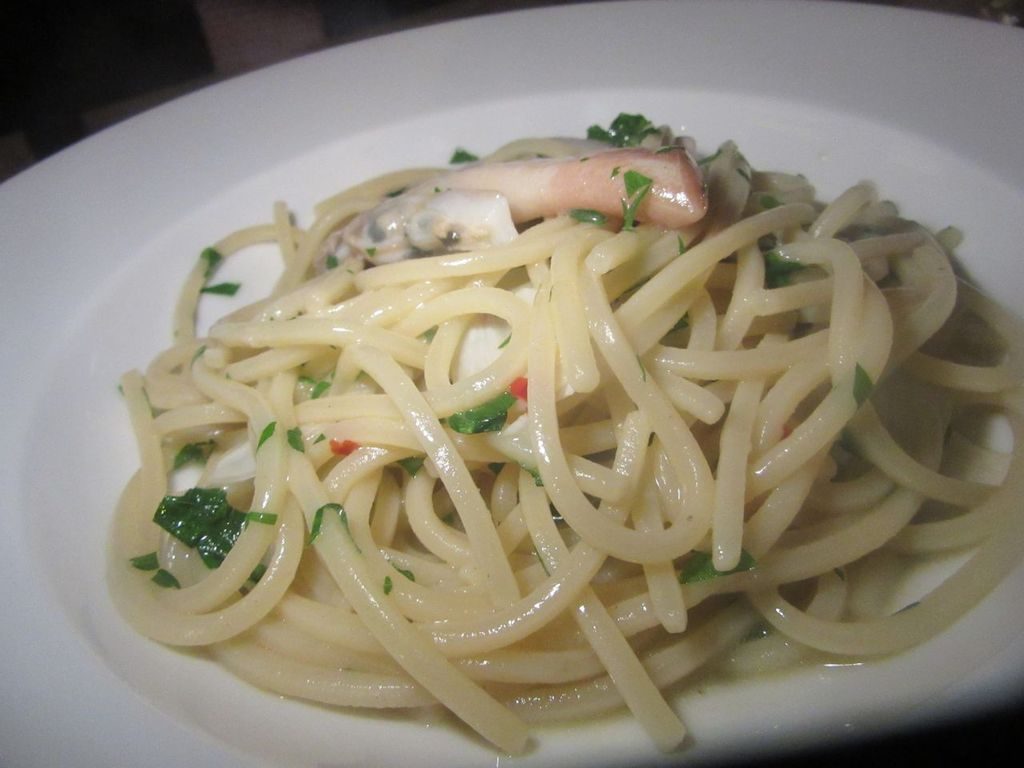 I’d like to see a few more razor clams on Ignacio Mattos’ spaghetti with lardo.

We’re settling in, friends of the fallen first-nighter, making introductions, passing business cards. I scan the wine list in my usual manner, looking for bargains. I ask the sommelier to help me chose an inexpensive red. “How about this Carmelitano Aglianico?” I ask, not knowing the label, but liking the modest cost and pointing to the $44 price so he gets my drift. 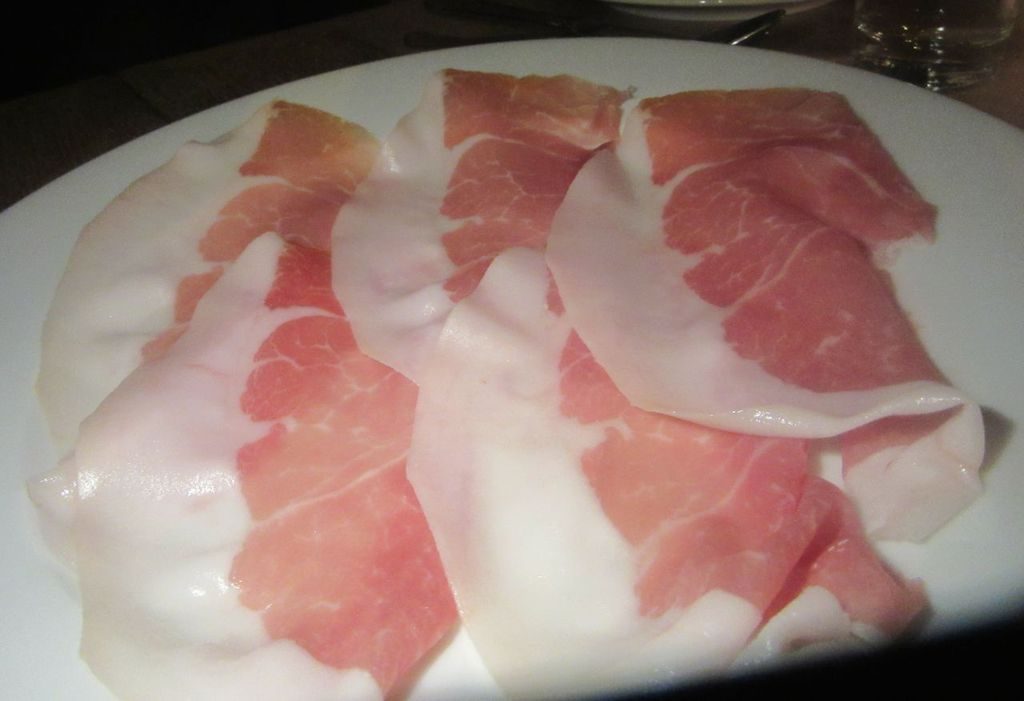 “It’s wonderful,” he responds. I’m feeling better already. The house sends out thin slices of prosciutto. Both the fennel salad and the insalata di funghi are very white, good enough. Raw mushrooms are tossed with pine nuts and Parmigiana atop a slathering of mayonnaise. The fennel is thinly grated, slivered and studded with just a few bright green Castelvetrano olive slices and shaved provolone.

My friend Belle, who can be counted on to always order octopus, is pleased by these tender chunks dished up with chickpeas in a salsa verde. The beef carpaccio, a chic vermillion, is draped over broken potato crisps. The house is filling quickly. I watch floorwalkers stepping up the speed.

Three of us have chosen pasta, smallish portions, priced from $20 to $24, as a main course. Spaghetti tossed with not enough razor clams and lardo. Morels, asparagus and mint dotting wide bands of lasagnette with serrated edges. “Paccheri di Grano Arso” (burnt grain), sauced with a chicken and olive ragù.

The Milanese di maiale, its thick, crisp crunch wrapping the pounded pork, is definitely the evening favorite. It comes with a bundle of chicory salad alongside. The room is dark now, smart ceiling fixtures and sconces reflected in the tilted mirrors. Andrew, facing the bar, spies Todd English and goes off to say hello. 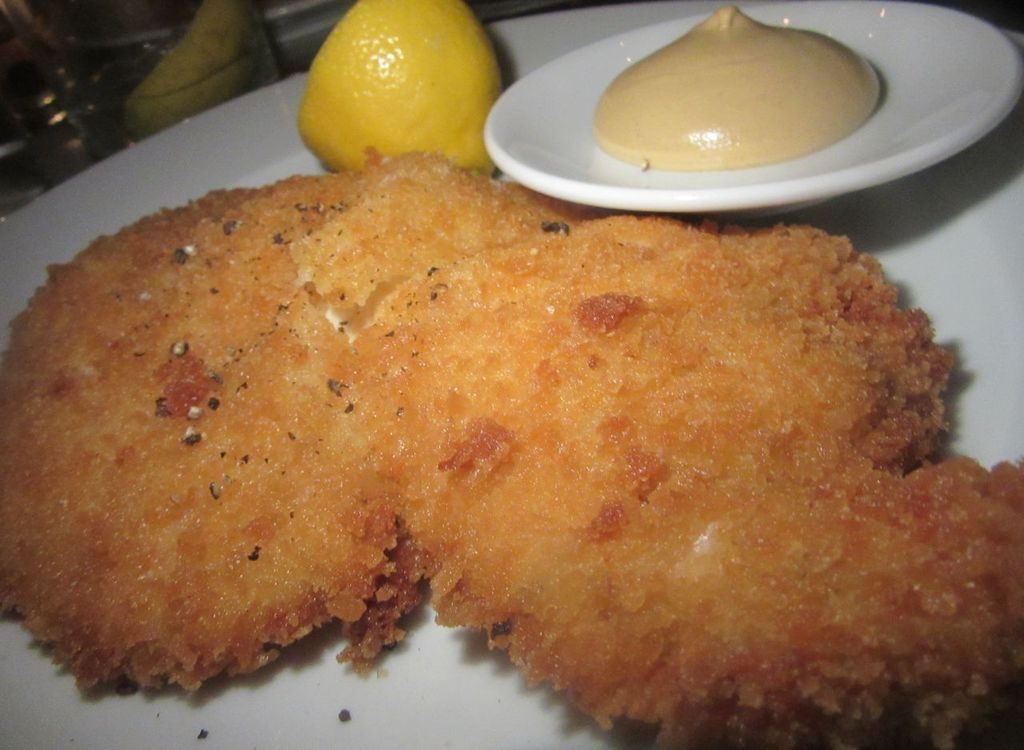 Breaded and fried to a nice crunch, the pork Milanese quickly disappears at our table.

“What’s going on here?” English asks him. “Is this place hot for some reason?” It seems he and a friend were just walking by and decided to stop for a drink. Andrew shrugs. In the fierce hyper-multiplication of  new eateries, a place is hot till it’s not.

As a finale, the four of us divide the “seasonal” lemon crostata and Campari-and-orange sorbetto, before exiting against the crush of stylish long-legged nomads arrivals. It’s new. It’s hot. I covered it, I’m thinking as I head home. I’m not feeling any need to return. But a few weeks later, I have a dinner date with my friends Polly and Will. “Do you know that place Paradiso-something?” she asks. 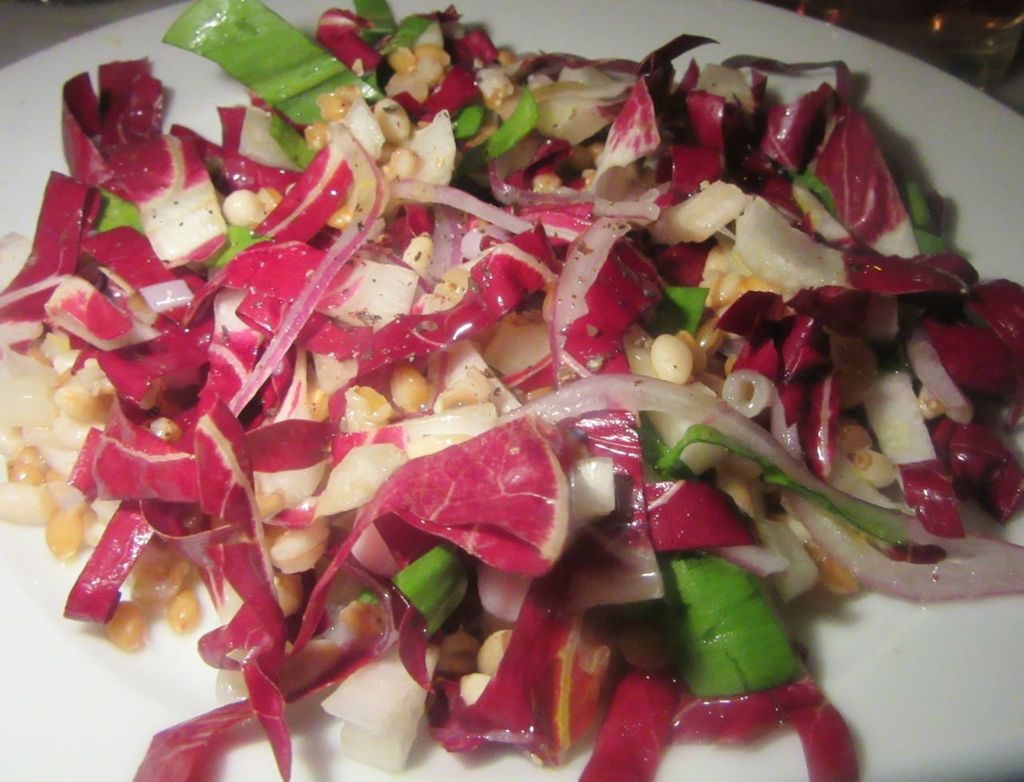 A salad of radicchio tossed with faro, ramps and pine nuts comes alongside chicken Milanese.

Well, I do. And they seemed to kind of know me. I have a card one of the floorwalkers pressed into my hand as we left. That’s how our new foursome settles in, delighted to be in a place that it’s impossible to get into.  I’ll taste more dishes, I think. Maybe I’ll discover the soul of this place. The daily specials listed on the menu that were promised two weeks ago are in rotation now: Seared lamb with braised fennel and greens on Monday, ossobuco on Tuesday, bistecca Fiorentina with gigante beans on Thursday, bollito misto with vegetables and condiments on Sunday.

Barry is excited to find calf’s liver on the menu. Almost no one offers calf’s liver anymore. He’d like it more rare and maybe thicker, but, nevermind, it’s still calf’s liver. We exchange memories of unforgettable liver steaks in the past.

Again, the crunchy coating of the Milanese, chicken this time, adds heft to a dish from the hit parade. A bright toss of salad — radicchio, farro, ramps and pine nuts – comes on a separate plate. My gnocchi dressed with cavolo nero, sausage and pecorino is okay, but nothing to moan about.  I look around. Is anyone transported?  How can you tell? That’s the moment one of my companion asks: “Why are we here?”
Yes, I know cavalo nero is the dreaded kale, but happily it didn’t overwhelm the gnocchi with sausage.

Paradiso is distinctly Altro now, more crowded than ever. It looks three deep at the bar, sipping, eyes darting, hoping for tables. The kitchen sends out panna cotta under a dark puddle of Amarena cherries and syrup, and pours sweet wine so we can dunk very good biscotti. 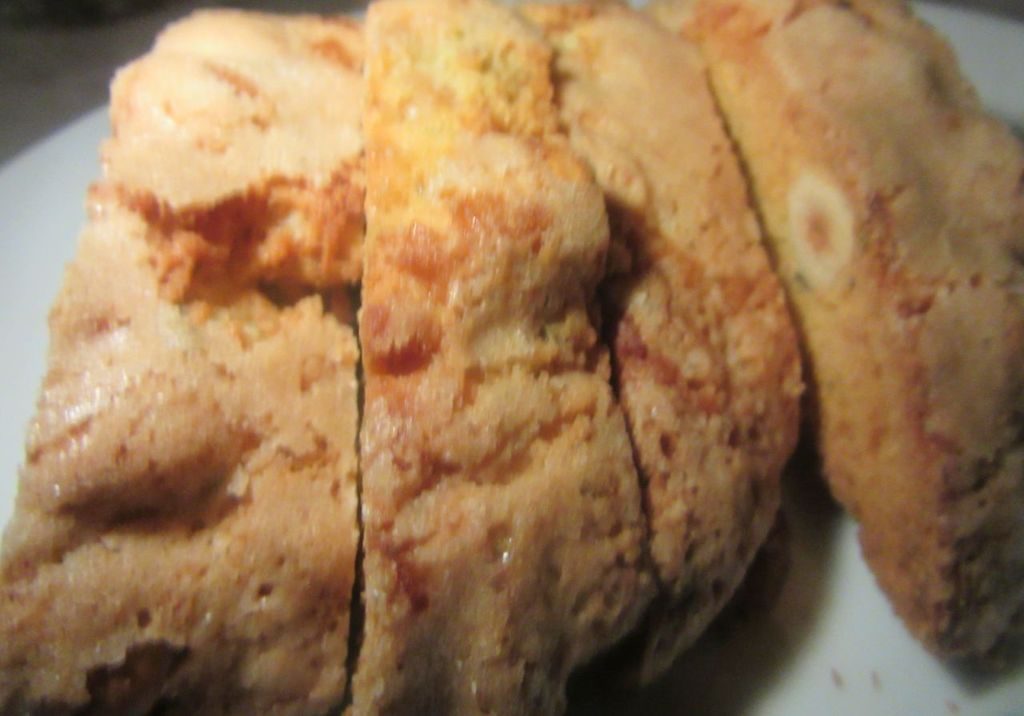 We decide to choose just one dessert: biscotti, big and nutty. The house pours sweet wine for dipping.

Photos may not be used without permission of Gael Greene. Copyright 2016. All rights reserved.