Something Rotten and The Visit

POW! Like a sucker punch to the jaw, Something Rotten opens the show out of the box with high energy, clever lyrics and crisp dance routines, so much so that in the first 2 minutes you know you are in for something special. And you are.

You will be smiling nonstop for the entire length of this musical. Clever. Funny. Energetic.

Something Rotten is a pure delight. It’s another show about show business, only this takes place in an earlier place and time. Two brothers, Nick and Nigel are desperate to write a hit play, but they happen to live during the reign of Shakespeare when he dominated the theatre world. What to do? When a local clairvoyant prods them to be ahead of the curve and pen a new genre (something that will most certainly happen in the future) they embark upon writing the world’s first musical, when singing and theatre take place at the same time! Plenty of theatre jokes, and nods to current musicals occur in a mash up of song, dance, Shakespeare, family dynamics and so much more. All that, and Puritans too. You definitely get your money’s worth during this night of nonstop laughter. 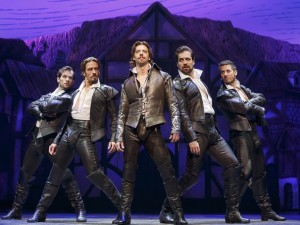 The cast is ridiculously talented: from the brothers played by Brian D’Arcy James and John Cariani to the dynamic Christian Borle (who was born to play the part of The Bard like a rock star) to the hilarious Heidi Blickenstaff to the equally hilarious Brooks Ashmanskas, Brad Oscar and Gerry Vichi, to the lovely Kate Reinders and finally to the dazzling minstrel who sets the scene for us all, Michael James Scott.

Now get this, the creative team is not your typical Broadway group.

Grammy winner Wayne Kirkpatrick (who has penned dozens of hits including Eric Clapton’s “Change the World”) is the composer along with Karey Kirkpatrick (who also has a most impressive bio). Book is by Karey and John O’Farrell, a well known author in the UK. Casey Nicholaw directs and choreographs this musical gem.

I’ll say it again, clever, funny, energetic. I want to see it again.

Now, from that glowing commentary…to The Visit. 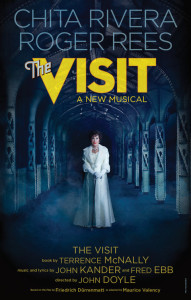 The good news is that this new musical is only 100 minutes. But during those 100 minutes I found myself rubbing my face, which is usually not a good sign. It is bizarre, not that bizarre is a problem. I like bizarre (like Hand to God is bizarre but in a good weird way) this bizarre is in like “why?”

Okay, so The Visit. The team is amazing. You have the final work from Kander and Ebb, who wrote the brilliant and legendary musicals Chicago and Cabaret, you have the award winning playwright Terrence McNally and award winning director John Doyle.

Now let me say, I like the story. I think it is heart wrenching, mystical and suspenseful. However, I think reading the story in your own living room is one thing. Seeing it performed in a musical is another.

It is just dark and somewhat creepy, but again in a way that makes you say, why?

The Visit (based on a play by Friedrich Durrenmatt, adapted by Maurice Valency) tackles the human issues of eternal love, greed and revenge. It is about the often widowed richest woman in the world who returns back to the town of her childhood to buy it…at a very big price. I will leave it at that.

There is some odd beauty in this piece though. Although the one set where all the action takes place is drab and overgrown and indicates a ragged town in complete disrepair, two young beautiful lovers dance passionately through the piece and witness the story unfolding, a reminder of the depth of love between Claire and Anton (Rivera and Rees.) Graciela Daniele’s choreography is indeed gorgeous.

Thank goodness for those two dancers to bring some light into this piece.