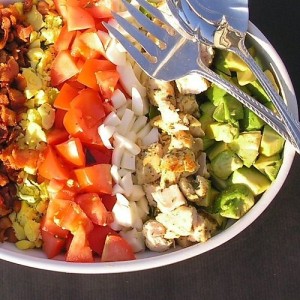 I know this from my own cooking, and all good cooks will identify: It is most often the dish you slap-dash together out of desperate necessity (and usually leftovers) that is the biggest triumph. How many times have I berated myself for not writing down exactly what I did when throwing dinner together from what’s lurking in the back of the refrigerator and cupboard? (On the other hand, I have, indeed, written many down and they are collected in “What To Cook When You Think There’s Nothing in the House To Eat,” to be re-published by HarperPerennial in February.)
Which brings me to Cobb Salad: One of the most famous dishes in American culinary history was created on the spur of the moment.

“One night in 1937, Bob Cobb, then owner of The Brown Derby, prowled hungrily in his restaurant’s kitchen for a snack. Opening the huge refrigerator, he pulled out this and that: a head of lettuce, an avocado, some romaine, watercress, tomatoes, some cold breast of chicken, a hard-boiled egg, chives, cheese and some old-fashioned French dressing. He started chopping. Added some crisp bacon — swiped from a busy chef.

“The Cobb salad was born. It was so good, Sid Grauman (Grauman’s Chinese Theatre), who was with Cobb that midnight, asked the next day for a ‘Cobb Salad.’ It was so good that it was put on the menu.

“Cobb’s midnight invention became an overnight sensation with Derby customers, people like movie mogul Jack Warner, who regularly dispatched his chauffeur to pick up a carton of the mouth-watering salad.”

Since 1937, more than 4 million Cobb salads have been sold at Brown Derby restaurants, according to the Brown Derby Restaurant Group, which, now that the two original Hollywood restaurants have closed, is what the company calls itself. It licenses the restaurant name for merchandise (including bottled Cobb salad dressing), as well as to Disney, which opened a reproduction of the original Brown Derby in Orlando, Florida, in 1989 and, in 1990. signed a 20-year agreement for Brown Derby restaurants in Tokyo, Paris and Anaheim, California. You can read all about The Brown Derby and its glamorous customers in The Brown Derby Restaurant: A Hollywood Legend, which includes many of the Derby’s recipes
.
Footnote: There’s also a legend about how the Brown Derby got its name: One night, Herbert Somborn, an ex-husband of Gloria Swanson, remarked — speaking of the mood of Hollywood in the roaring 20s — that “You could open a restaurant in an alley and call it anything. If the food and service were good, the patrons would just come flocking. It could be called something as ridiculous as the Brown Derby.” Hence, a restaurant shaped like a hat opened near Hollywood and Vine in 1926.

Cut lettuce, half the watercress, chicory and romaine in fine pieces and arrange in a large salad bowl.

Cut tomatoes, bacon, chicken, eggs, and avocado in small pieces and arrange, along with the crumbled Roquefort cheese, in strips on the greens.
Sprinkle finely cut chives over the Cobb salad and garnish with the remaining watercress. Just before serving mix the salad with the Cobb salad dressing.

Blend all ingredients together, except oils. Add olive and salad oils. Mix well.
Blend well again before mixing with salad.

A note from the Brown Derby: “The water is optional, depending upon the degree of oiliness desired in the dressing.”