The Fall: A Chilling Thriller 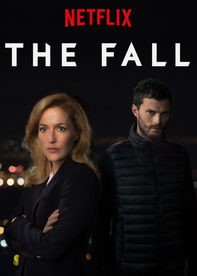 Don’t panic, I’m not talking about broken bones tomatoes. Gillian Anderson stars as Detective Superintendent Stella Gibson, who’s brought in to help the Belfast police investigate a series of murders. Gillian Anderson may not look 46 but she is a tomato and her performance in Netflix’s original drama “The Fall” is magnificent and so’s the series. Season 2 just premiered and what I love about Gillian’s character is that it is very complex, flawed but powerful with an unapologetic true sense of self. I highly recommend tomatoes check out “The Fall”. I just love it when a woman is the boss.

Netflix is knocking it out of the park so I’m hoping “The Fall” doesn’t get lost in the mix of their other original dramas because it is remarkable in every way.

If the lead sinister guy looks familiar well Jamie Dornan also happens to play Christian Grey in none other than the “50 Shades of Grey” film. I can’t believe I haven’t even read the book yet. It’s probably the only time I’ll ever be in the 1% club. He gives a stunning performance in “The Fall” as well. He’s got the acting chops and he is on par with Gillian Anderson’s brilliance.

When the Belfast police hit nothing but dead ends in their investigation of a series of murders, London-based Detective Superintendent Stella Gibson is sent to take over the case in this suspenseful and unsettling crime series. As she navigates her way through bureaucratic and personal entanglements, Gibson soon discovers that her serial killer prey is a far more complicated foe than she ever imagined — and he’s not about to give up easily.