“The Father”: An Important Play for Adults Caring for Parents

I miss the insistent ringing of my phone that would invariably occur two, three, maybe four times a day at the most inopportune times. Mornings, lunchtime and evening, the phone would ring, and it was my dad. He was looking to say hello, check in on me, or talk about a piece of music that was in his head and he suddenly, obsessively wanted to hear, asking me if I could get it for him.  And, without skipping a beat, with each and every phone call, dad would  complain that his cell phone wasn’t working again, and that “it was a piece of junk.”

Sometimes, he would say it would buzz and not ring. “That’s because you have to increase the volume, dad,” I would reply. Once, when he was in a rehab facility, and he was particularly vocal about his “piece of junk phone,” I had a melt down. I explained he had to increase the volume on the side, once, twice, three times. It didn’t matter. He kept complaining, and so my voice got louder and louder until I was screaming into the phone, “Dad! You have to put up the volume on the side of the phone. “ I screamed over and over like a madwoman, until I couldn’t breathe. And in his frustration of trying to grasp what to do, he was on the verge of crying. No matter how I explained, in his elderly innocence,  he still didn’t understand at all.

“The Father,” written by French novelist and playwright Florian Zeller (named one of the hottest literary talents in France by “The Independent”) covers the landscape of an elderly parent and adult child caretaker, and all the numerous feelings that are navigated by both parties, as well as the fallout that occurs for those in relationship around them.

Frustration, anger, pity, sadness, guilt, are just some of the mixed up emotions that any family member undergoing this experience can recognize. As wrenching as it is, it is also so good to see a play tackle this topic and watch it dramatized on stage. All of it. The full gamut.

“The Father” stars the robust and still handsome Frank Langella as Andre, and Law and Order: SVU’s Kathryn Erbe as his loving, yet conflicted daughter and primary caretaker, Anne. In each scene, Anne does her best to keep her dad safe, provide a home, food and care for him. But Andre will have none of it. He doesn’t understand why he needs any help, and persists in being contentious. Anne just wants him to be okay.

Andre is a stately, healthy looking man living in an apartment in Paris. We don’t quite know what is reality or his perception as numerous scene changes show different characters coming in and out of Andre’s life.  As the scenes shift, the stage goes dark, lights flash around the perimeter, and changes in the scenery occur.  A brilliant convention, which helps us to actually see his perception of what his truth is.

Andre looks healthy,  but his mental capacity is diminished. He angers any helpers who attend to him, and loses everything, blaming the missing items on people stealing from him. He never knows what is going on, and complains that no one tells him anything. He even rails that he is going to call a lawyer. Damn, if my father didn’t say the same exact things. He even told me once he had a conversation with an attorney to represent him. (Never happened.)

The one constant for Andre is his daughter, Anne, the one he clearly likes the least of his two daughters. Anne is trying valiantly to keep him with her at home at all costs.  After a particularly tough dinner, an angry outburst by her live in boyfriend prompts her to realize their relationship is being sacrificed for her father, who has no real appreciation for what she does for him.

Anne can no longer handle her father, and she takes in that heartbreaking realization. 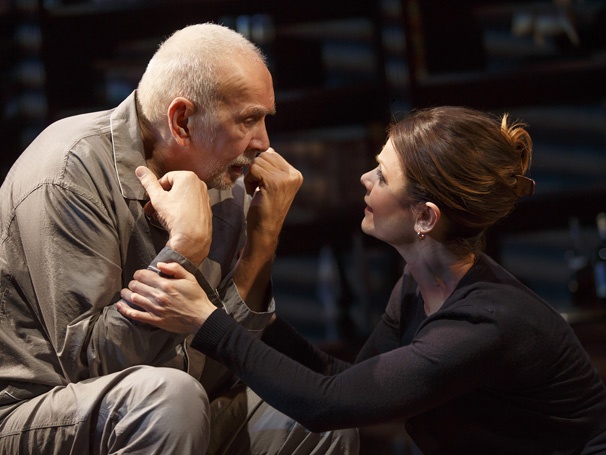 What’s interesting is that on the dementia spectrum, my father was on the mild side. He did believe people stole everything, so he hoarded his Irish Spring soap, he did lose everything constantly, and stated that he planned to go to court. He was always confused by time of day (for him, day was night and night was day.) But other than that, he was pretty clear.  My mother, on the other hand, is worse. She goes in and out of stories of her life from her past that she stitches along with words she reads on material in front of her (like newspaper headlines) the dubious present and her imagination. A conversation with her is akin to having a dialogue with the author of a fable. You just try to get the big picture and not get lost in the details. Just like with Andre, as his reality is based on a patchwork quilt of memories, dimmed comprehension and his feeble attempt to fill in the blanks.

That’s why the way “The Father” is presented is brilliant. We, the audience, see the story through Andre’s confusion and his staunch belief in what he thinks is his reality.

Directed by Doug Hughes,”The Father” is an important play to see for any adult dealing with a parent who can no longer care for themselves. Watching the 90 minute piece unfold that night, re-living my own complicated feelings, I calculated that it was exactly 6 months to the day since my own father passed.

When she would address her father, Anne (Kathryn Erbe)  even sounded a little like me when she said, “Dad” in a pleading, sympathetic, yet frustrated way.  I realized I missed hearing those words come out of my mouth, and it dawned on me that I would never say that word, “dad” again.

As much as I used to complain about him calling me constantly, I wish I could hear his ring one more time.