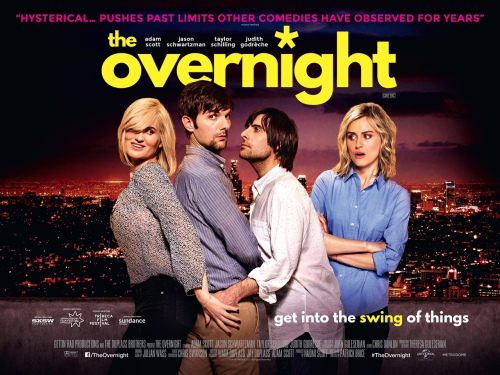 When a married couple with child moves from Seattle to Los Angeles, they’re hoping to make new friends. And after the father of a child their son is playing with in the park approaches them, it certainly seems they’re about to. Only we know from the encounter, and the subsequent dinner invitation, it’s going to be quirky.
Alex (Adam Scott) and Emily (Taylor Schilling) bring their youngster over to Charlotte (Judith Godréche) and Kurt’s (Jason Schwartzman) house for pizza night. At their new friends’ insistence, they agree to stay after the boys get sent off to sleep. Like a modern Bob & Carol & Ted & Alice with satirical twists and turns, we could almost dismiss or dislike these characters. Except we can’t.

They’re infused with so much whimsy, courage and vulnerability, it’s impossible not to like them. The Overnight succeeds at being wickedly funny poking fun (at many things) without being clichéd or the least bit mean-spirited. Director/Writer Patrick Brice (Creep) will be one to keep an eye on. And don’t miss watching the end credits.