If you are into biting humor, frenetic energy and complicated relationships, The Spoils, written by and starring Jesse Eisenberg is for you.

Ben (Eisenberg) is a guy who is completely inappropriate with everything he says and does. A “film maker” he has been kicked out of grad school with no apparent income, but still manages to live in a great apartment funded by his parents. 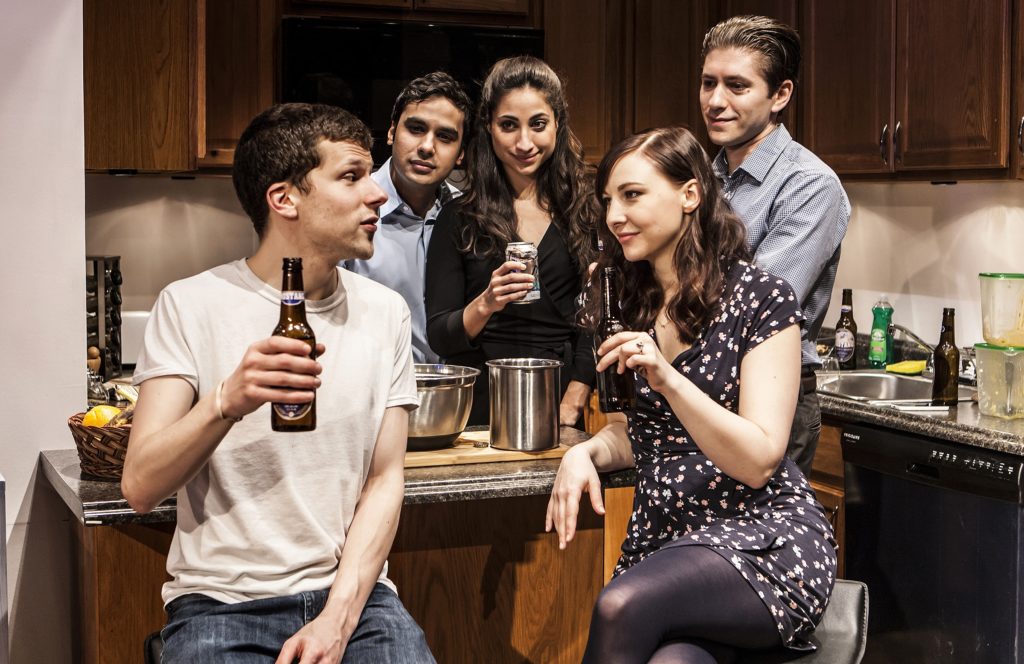 The cast of The Spoils, by Jesse Eisenberg Photo credit: Monique Carboni

Ben takes in Kalyan, a buddy from NYU, who is a very nice, earnest and hard working immigrant from Nepal. Kalyan’s main quirky trait is using PowerPoint presentations to explain things. Ben seemingly adores and admires Kalyan, and wants him in the apartment, but also finds opportunities to tear him down, his bullying culminating in a nasty and mean act. Kalyan is courting an Indian-American doctor, Reshma, who barely tolerates Ben.

As the piece progresses, Ben finds out that a woman who he had a serious crush on in grade school, Sarah, is marrying another school mate, Ted, who became a rather boring banker.  Ben is on a mission to get her back.

The engaged couple take a liking to Kalyan and Reshma and spend time with them. Ben, always feels like the odd man out, and he is indeed very, very odd.

He shares a most bizarre and disturbing fantasy about Sarah that he experienced when he was young.

Dialogue flies fast and irreverently in this Scott Elliott directed play. All the actors are well cast: Kunal Nayyar as Kalyan (you know him from “The Big Bang Theory,”) Annapurna Sriram as Reshma, Erin Drake as Sarah, and Michael Zegen as Ted complement the tic ridden and hopped up central character. As writer and actor, Mr. Eisenberg lives and breathes this un likeable and yet strangely compelling Ben. Although he is one hot mess, you kind of can’t wait to hear his next bizarre statement or life’s observation. (Could it be that Ben embodies the extreme dark side of all of us?)

The most intriguing relationship is the one between Ben and Kalyan. Why does Ben have a love-hate relationship with Kalyan showing him love and respect one moment, and disdain the next? Why does Kalyan stay? On some level, they are co-dependent. They both need each other. 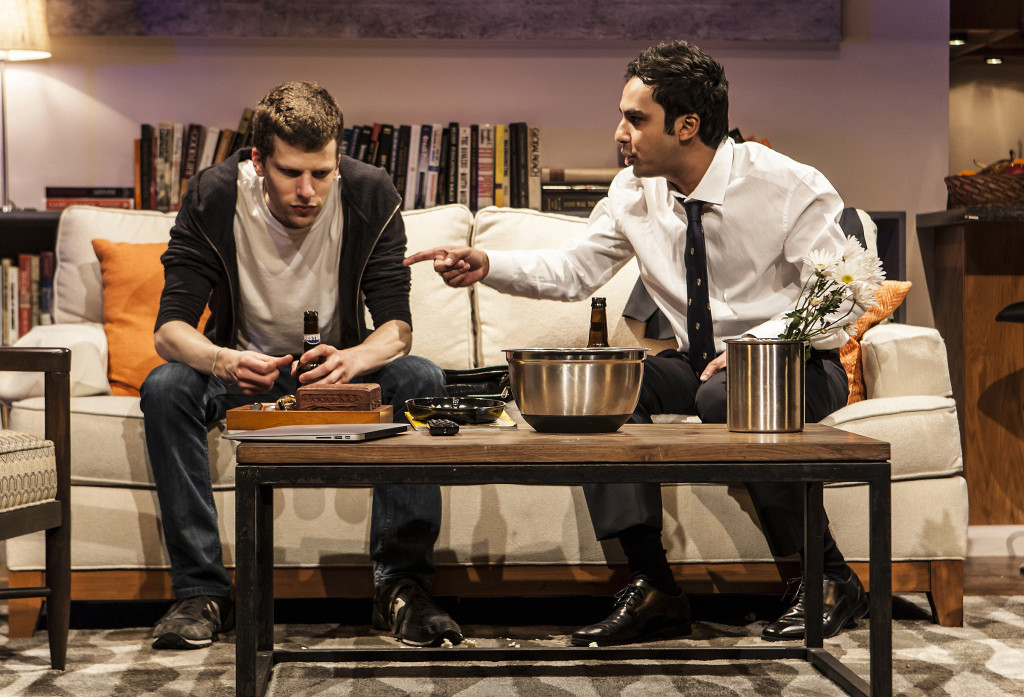 The Spoils plays for a limited run at the fabulous Pershing Square Signature Theatre Center all the way west on 42nd Street. At the huge Signature Theatre complex entertainment can be found while you wait for the various houses to open. Live jazz music fills the spacious main area where you can grab a hearty bite or a glass of wine and make it a nice rounded evening.